Dave Makin tacked the word, “International” onto the Benoit Mandelbrot Fractal Art Contest 2011 in his announcement of this year’s contest at FractalForums.com.  And while the contest could be said to span the globe, the word “International” suggests a status for the contest that is something of an exaggeration, even more of an exaggeration as the calling of the annual American baseball championship, the “World” Series.  Sure, the World Series is the world’s biggest baseball championship and is probably world class in terms of athletic quality, but it presumes to take in the entire world and that (sorry fans) isn’t true.  (Apparently, in some parts of the world baseball isn’t even played.)

Then there’s Miss “Universe”.  Well, considering that the planet Earth has a monopoly on human life in the universe,  I guess the name could possibly be considered accurate.  But can any beauty pageant have “Universal” proportions?

Can a fractal art contest have “International” proportions –international status?

The BMFAC has grown somewhat from its first year in 2006, but the number of entries I think still makes it an art contest that is better labelled as City-Wide than anything else.  Fractal art just hasn’t developed beyond the realm of the amateur and the the hobbyist to be taken seriously beyond that of a city or school art competition.  There’s nothing world class yet to show people.  At least they haven’t had any entries of that caliber yet.

In fact, the use of Benoit Mandelbrot’s name is itself rather presumptuous and something of an exaggeration when one considers the enormity of what Benoit Mandelbrot himself has achieved in the field of mathematics.  Benoit Mandelbrot has made major contributions to science while fractal art, albeit derived from his discoveries, is practically unknown if not irrelevant in the world of art.  Trying to suggest that fractal art belongs up on Benoit Mandelbrot’s level of expertise and importance requires a rather inflated view of one’s artwork. 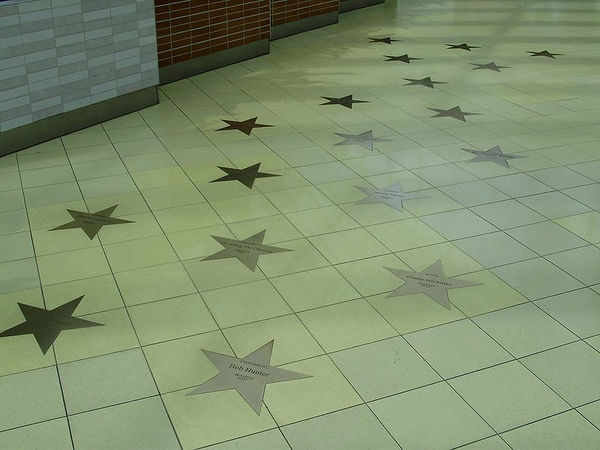 It reminds me of an incident that occurred in my city.  A local shopping mall, albeit the biggest, got together with a local newspaper (a free, weekly, advertising-rich “newspaper”) to commemorate celebrities by putting their names on shiny, gold floor tiles and calling it “The Walk of Fame”.

Controversy ensued when they –attempted– to honour a local guy who moved to the US and subsequently became a big Hollywood movie star.  It seems he –wasn’t interested– in the shopping mall’s “Fame” or coming home to be lauded in a great ceremony and praised in the pages of a weekly ad-wrapper.

The little weekly advertiser covered the controversy (outrage!) for a few months and then moved back to their usual coverage of drug busts, car accidents and Real Estate Special Editions.  When they finally announced their list of celebrities to be immortalized on the shopping mall’s floor, I had difficulty recognizing the names of almost all of their “famous” people who had, in contrast to the Hollywood movie star, eagerly agreed to attend the opening “gala” and be photographed with their personalized floor tile.  They just couldn’t attract serious people to their shopping mall/ad-wrapper “Walk of Fame”.

One thought on “Does the BMFAC get enough entries to be taken seriously?”