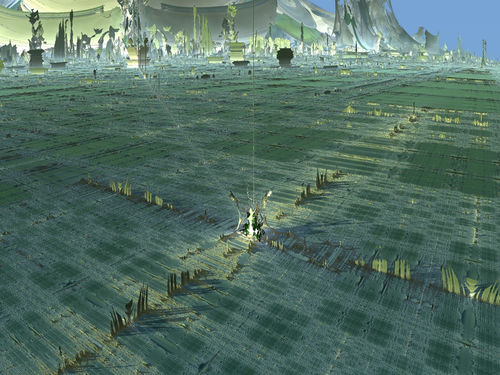 Mayan Trickster by reallybigname was a great piece of design but this one here by Jesse Dierks is what I would call a great landscape –a fractalscape.

It’s a classic sci-fi vista complete with a rich, city of the gods in the distance.  Buildings that look like statues surrounded by a lush expanse of rich agricultural land around it.  And what’s with that weird temple like thing at the cross roads?

On the other hand it has a passing resemblance to the fire bombed cities of WW2 Japan.  A strange place indeed.  This is not the usual geometric scene made from Jesse’s own program, Mandelbulb 3D.  I guess all fractal programmers are artists at heart. 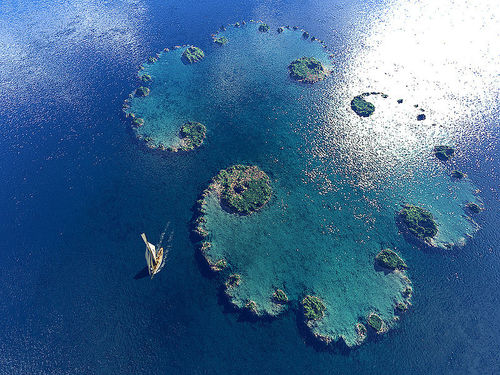 This one I found on the Wikipedia.  An interesting example of post-processing.  The author give its story like this:

Julia set rendered as a landscape with Terragen. Fractal previously created with Ultrafactal (coordinates around 0.28 + 0i) and saved as a terrain with Terraformer. Boat added and level adjustments made with Photopshop.

The realistic context (all computer generated) is quite intriguing.  Someday UF may have a rendering option that does this with one click? 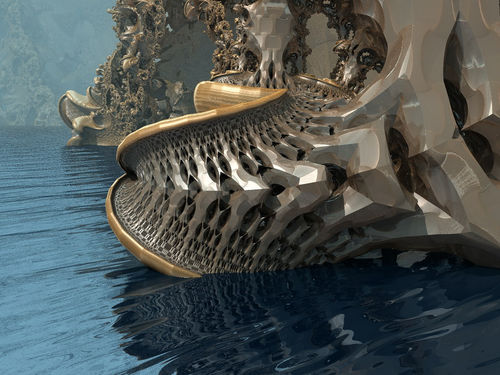 The Flood by Taurus66 (fractalforums.com)

Oops.   The Mandelbulber v 1.08 by Krzysztof (buddhi) Marczak already has it, or at least a lake effect feature.  It’s an old effect, but it still looks neat when used carefully.  This fractal thing, although somewhat fantasy-like, steps into reality with the water effect.  At the very least it dips its toes…  But now it’s become an island fit to illustrate a new voyage of Sindbad.

Secure Beneath My Watchful Eye by Madman (Fractalforums.com)

The eye thing looked so natural I first thought it was just a reflection.  Madman is living up to his name here by turning this happy fractal scene into a laboratory nightmare.  But again, the eyeball addition fits nicely reminding me of the fine mixed media images I previously reviewed by Brutal Toad et al. 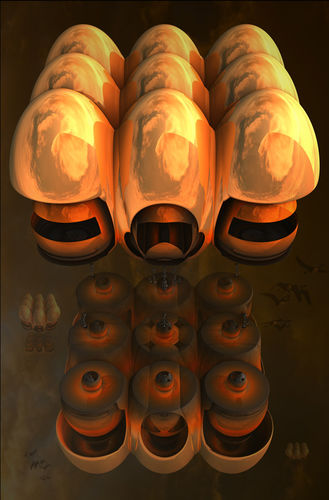 The Scapegoats Udder by Kraftwerk (aka Mandelwerk)

This is quite recent as well as being fresh and innovative.  Am I the only one that senses a Dali-like style to this?  What are they and what do they mean?  There’s something quite compelling about this image.

From the Fractalforums.com gallery page:

Description: Inspired by the painting by William Holman Hunt. http://en.wikipedia.org/wiki/File:William_Holman_Hunt_-_The_Scapegoat.jpg
Having a fever… is good for creativity…

Mandelbulb 3D
Photos of clouds in background and reflections + birds my own stock, added in photoshop.

Photoshop.  Why does that seem to be popping up so much?  Johan Andersson has really done a great job on this.  It’s stylish and most important: not overdone.  He’s added touches that only accentuate the image.  Such restraint and tastefulness is uncommon in the fractal art world.  But then, Johan’s not your average fractal artist.

Well, time to roll the movie credits.  Like all bank robbers, I wish I could grab bigger handfuls.  I might just return, For a Few Fractals More…