Many people have a favorite sport.  Some follow soccer, others american football or hockey, basketball, baseball, cricket…  I follow hurricanes, the tropical storms or cyclones that form in the Carribean during summer and fall of every year.  There’s never a players strike and you can follow all the action over the internet.  In fact, you really don’t want to buy tickets to see any of these “games” live.  The American National Hurricane Center gives you the best seat in town, or out of town, rather.  There’s only one team but everybody loses.  And it’s impossible to cheat.  It’s a funny sport.

This year was supposed to be much more energetic, which was a great relief after the incredibly disappointing 2009 season.  I’m still waiting for a really big, Category 4 or 5, game this year.  Bonnie was so pathetic the NHC stopped talking about her before she even made landfall which, in this game, is ordinarily the main event.  She just went back to being a depression —tropical depression.

They don’t name them only after women anymore, they’ll use any name.  They ought to let the folks living in the path of the hurricane suggest the names.  But they’ve got more important things on their minds –hiding, dodging, staying alive.

Life is the sport of sports and art is its World Cup.  But that’s coming from a guy who thinks hurricane season is more fun to watch than the SuperBowl.

Back to fractal art:  here’s a piece of fractal artwork by Deviant Art member Sophiiiii that caught my eye just this week and also strongly suggested –hurricane– to me.  (That’s Sophi with five “eyes”.) 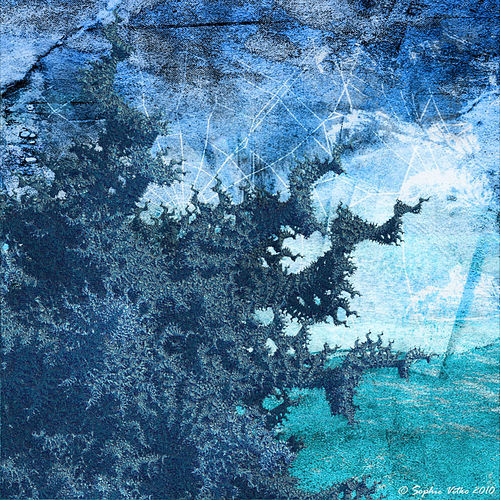 This image (by “Five-Eyed Sophi”) has a number of interesting aspects.  Although, from the title, she probably didn’t intend it to have a marine theme much less that of a hurricane, it fits well into this and I think she saw a similar terrifying weather theme from her choice of the word, frost.  But maybe the spider web is the terrifying theme here?

I guess that’s the thing with “imaginary” art: the image is open to a number of interpretations, each one arising from the personal context the image unavoidably becomes mixed up in when it engages the viewer’s mind.

It was made in Incendia and I suspect has a few other layers incorporated into it, such as the spider web and the cloudy, watery background.

As I was saying about hurricanes, they are “wrathful” creatures that arise almost out of nothing and quickly grow (within days sometimes) into massively destructive beasts.  They are also composed, not of a neat circulation pattern which we see in the simplified diagrams used to explain them, but of broken and winding bands of thunderstorms and sometimes tornadoes spawned by those thunderstorms.  Sophiiiii’s image here, although completely artificial, is an excellent example of such an “extreme weather phenomenon”.

And it looks good too.  Incendia seems to have this nice ability to make grainy images that are more characteristic of real world imagery than the slick smooth world of computers, but I think Sophiiiii has added a lot of her own artistic talent to make this one looks a well as it does. 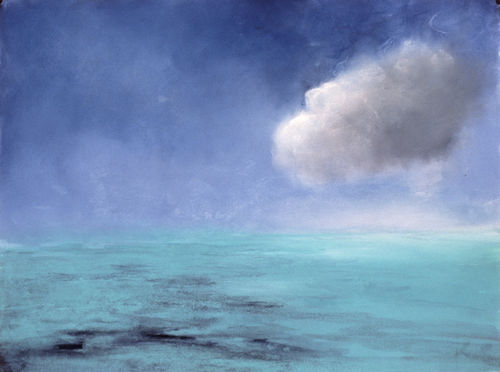 Sure.  This one’s not a fractal.  But when you’re floating in the ocean off the coast of Quintana Roo where Mexico meets Belize and the rest of Central America, such things are incidental.  There is the hint of shore in the dark bottom we see through the water, but where is it?  This is the morning after the hurricane.  It’s beautiful.  Out there somewhere is your house, but take heart, there’s plenty of building materials all around you.  One of them must have hit you and knocked you out.

I read an anectdote about hurricane Hattie that erased Belize City back in the 60s.  The author, a young boy at the time, told about how his family had completely lost their house (built on the beach, incidentally) but then a week later his father and uncle were out fishing and found a better one that the storm had dropped off from somewhere else.  I’ll bet there’s a lot of that shuffling of property going on in the wake of hurricanes every year. 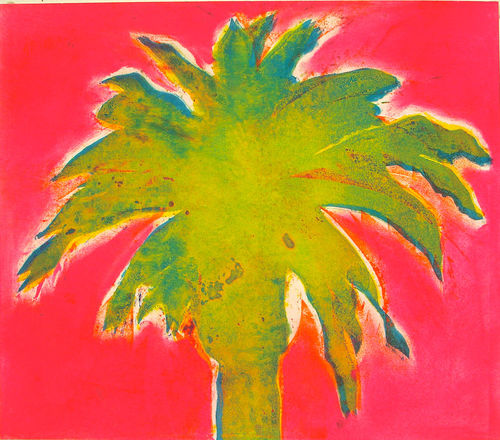 Obviously this isn’t a fractal either, but Peter Alexander has made palm trees into such a separate and well developed genre much like the fractal spiral is in fractal art that they deserve a mention.  Click on the image to see the whole collection.  Very colorful.  I had a hard time picking the best one because they’re all very interesting.  Monoprints are prints that are made with unique characteristics and thus not reproducible merely by making another impression with the plate.  (I’ll bet they sell for more too.)  I think the coloring here is very sophisticated and carefully done.  I don’t like a lot of contemporary art (of the paintbrush sort) but these palm trees are something completely different.  Better than Warhol? 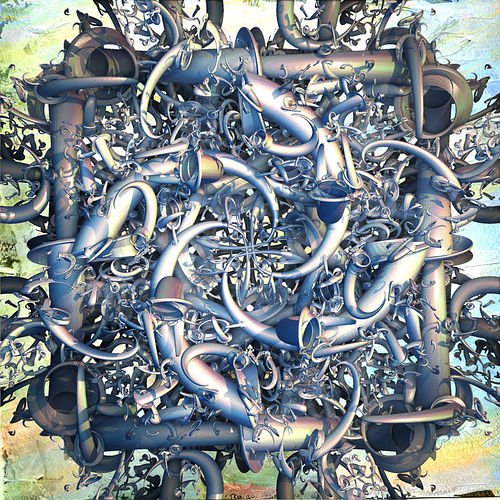 This one is just fantastic.  Color, shadows, lighting, contrast; it’s like a carefully painted old master’s work, laboriously rendered and painstakingly perfected.  That’s what Incendia can do when the right person is clicking it’s buttons.  I guess it’s a bit like paintbrushes: what comes from them depends on who’s holding them.  This is sort of weird, but I think the real beauty of this work is in what the image is reflecting.  It’s the light source that we don’t see.  There’s something golden, shining and radiant in this image –off screen– and it’s all suggested by what we see in the image.  The question is not, “What is this?” but rather, “Where are we?”  This is a great place.

To me this image is sea shells and other sea debris caught in a tangle of branches on the shore after that world cup of storms –a hurricane.  Neatly collected, I see.  Apparently the best time to collect sea shells is right after a storm (the key word is “after”).  That might also be the best time to check and see if your neighbors are still alive, so you’ll have to chose between the two.  Of course if your neighbors are down on the beach… with the seashells…

Sophiiiii added a link on her Deviant Art page to the image she used as the background for this image.  It’s worth looking at too. 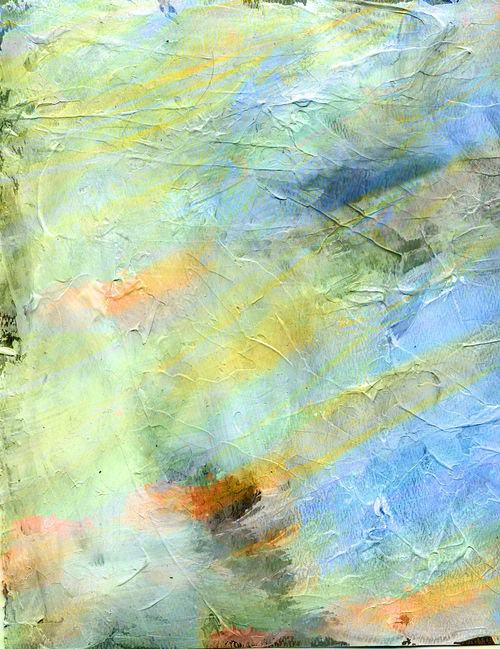 I find it interesting how the background complements the incendia image.  It may seem trivial, but the background layer, even just a colored texture like this, just like the frame on a painting, is part of the artwork and contributes to the viewer’s general impression in ways which I suspect can be quite strong even if they may appear subtle at first glance.  Speaking of frames…

What came first?  The Picture or the Frame?

Flickr’s thesmartestfish (Sophia Brueckner) said “experimenting with some vintage round picture frames I bought on etsy. I was thinking it would be interesting to have a series of paintings in round frames. not sure if I want to keep going in this direction though.”

(Etsy.com apparently is a website that describes itself as “Your place to buy and sell all things handmade, vintage, and supplies.”)

Thesmartestfish really is pretty bright.  Not only is she a Master of Fine Arts student, she also works with javascript to create generative imagery using the Processing platform; a nice combination of skills we could all use.  From this I suspect she either printed and embellished by paintbrush the images in her round collection (similar to monoprinting) or just painted them freehand using their simple but characteristic, generative look as a guide.  Either way she’s produced something quite appealing.

Here they are; nicely photographed, too. 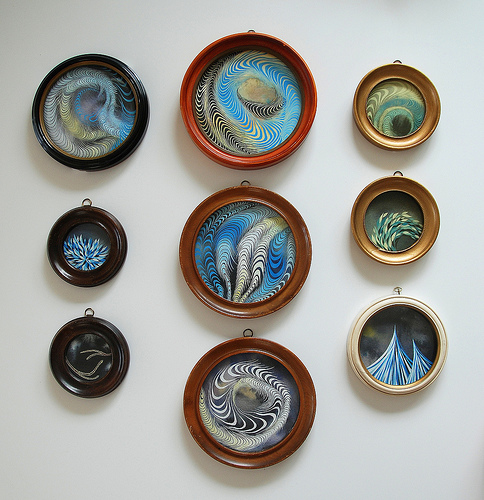 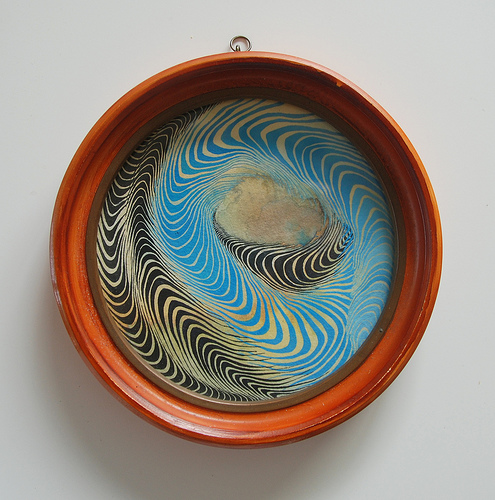 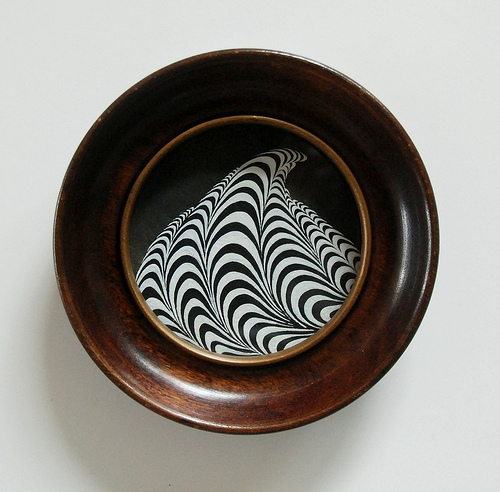 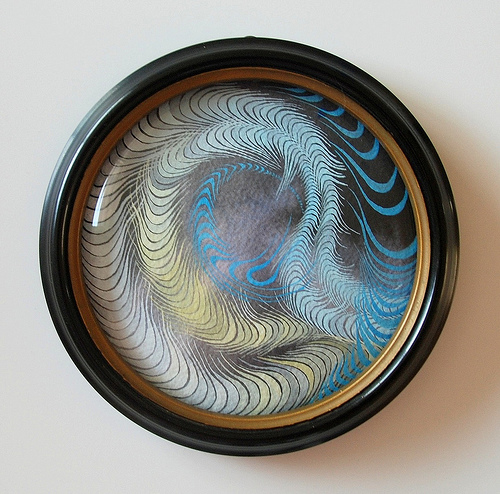 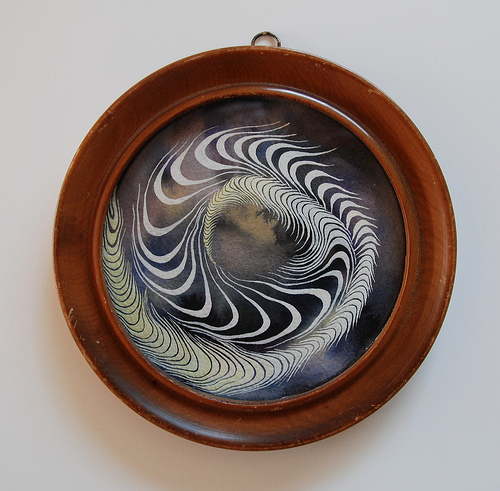 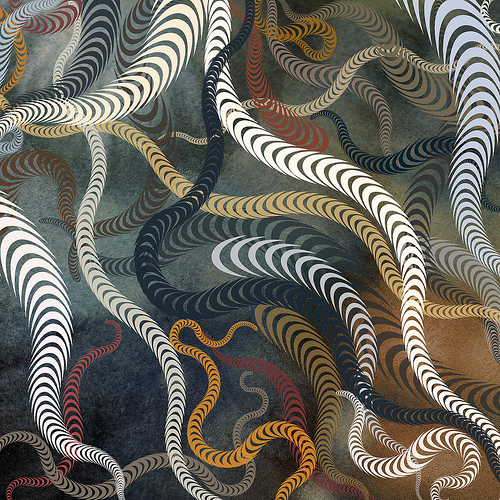 The round paintings look hand-painted but the bottom image the author describes as “shapes generated by javascript + photoshop with a scanned watercolor background.”

It’s a strange dynamic between frame and picture but there’s more dynamism going on.   Consider the interplay between the digital imagery of the javascript-photoshop process and thesmartestfish’s own hand painting skills.  Thesmartestfish created the javascript which in turn produced the snakey tendril imagery.  But that computer generated imagery in turn went on to inspire the hand made images in the round picture frames.  From such well defined and synergistic rotation often comes a powerful hurricane.  But it has to stay well out at sea, away from land, and feed on  warm waters and also avoid the vertical shearing forces of interfering ridges and troughs which dissipate the force of that rising energy coming off the sea.  Hey, some people like to talk in football or baseball analogies.  I prefer hurricanes.

Finally, everything flows back to where it came.  Solomon remarked on this very thing almost three thousand years ago: “All streams flow into the sea, yet the sea is never full.  To the place the streams come from, there they return again.  All things are wearisome, more than one can say.”

Ouch.  Here’s a fine illustration of that somewhat depressing/encouraging quotation.  It’s in the form of a video screen capture of a highly talented java applet rendering Fractal Drainage Patterns.  This is extremely fractal.  But I doubt it would have cheered up Solomon: everything is just sinking into the earth and if you watch the applet long enough at the original site, everything eventually fades into nothing.

I think they’re cool.  They’ve got a weird, sci-fi, Andromeda Strain replicating space-virus look to them.  I suppose epidemics and even wars have similarities to sports, just like hurricanes season does.  But hurricane season has a much more regular, reliable schedule than those other disasters even if all the hurricane game dates are impossible to predict ahead of time except by more than just a few days.  I should go check right now.  There’s a new update at the NHC about every four hours.  The next big one could be boiling away as we speak.

3 thoughts on “Frames, drains and hurricanes”