It’s useless, and although there have been efforts to build something substantial there, ultimately the page keeps reverting back to a few shallow paragraphs that fail to even offer a basic definition.  I’ve been going there for several years and have always wondered why it never seems to develop into anything, but now I think I’ve figured out what the problem is and it goes to the very heart of  what “fractal art” is all about. 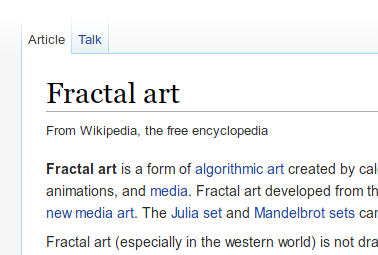 Unlike most websites, the Wikipedia documents almost every edit made to its pages and even has a separate page for discussing what should be done to improve the pages or any other “concerns” about it there might be.  Each Wikipedia page has its own corresponding talk and history page and for Fractal Art it supplies something that is quite rare: serious criticism.  It’s quite refreshing to see someone besides Orbit Trap actually express some sober second thoughts about Fractal Art.  Unfortunately, the way the Wikipedia works, it’s unable to take that next step and give a coherent, single-minded expression to what  it thinks.  Unless, of course, that mostly empty page on Fractal Art sums up what “the Wikipedia” thinks about Fractal Art; that is, not much at all.

I’ve chosen a couple of salient incidents from the Wikipedia Fractal Art page documentation to answer the question I posed in the title, “Why doesn’t Fractal Art have a half-decent Wikipedia page?”

The Rise and Fall of the Fractal Art Manifesto

If you want to read the whole story, or at least follow the history of edits to the Fractal Art page, all you have to do on that or any Wikipedia page is go to the “view history” tab at the top right of the page.  Click on any “cur” link in the list and then click on “previous edit” near the top of the left column.  This is what I did and it allows you to then read the editing history “Next edit” by “Next edit”.  This link is to the very first entry, the initial creation of the Fractal Art Wikipedia page.  Click on the “Next edit” link on the right to start your journey.

This is where I discovered the fate of  the venerable Fractal Art Manifesto (FAM) by Kerry Mitchell and its treatment by the Wikipedia editors.  I wrote a blog posting about the FAM back in 2011 and part of the motivation for that was it’s (at the time) high status on the Fractal Art page where it had advanced from not just an “External link” but was enshrined in its own separate section as you would expect any historic milestone for a subject to be.

But four years previous to that, in 2007, its presence in the External Links section of the Fractal Art Wikipedia page met this fate by “TheRingess”, that powerful queen of Wikipedia’s Fractal Art page:

As much as I’d like to do the same thing to the FAM, I thought, “What’s wrong with a personal essay?”  I mean, gee, it’s still worth a link.  And then I thought, “Doesn’t the word, ‘personal’ describe more or less everything in the whole fractal art world?”  Aren’t all my own (great) blog postings just “personal essays”?

Anyhow, the FAM was resurrected a few years later and even given its own separate section on the page, as I mentioned.  To anyone in the fractal art world this might seem reasonable, since the FAM reads like it has authority and also because there is nothing quite like it in all the fractal art world.  Like any other art manifesto it seems to define the art form and be, in itself, of historical importance.  How it got chopped from the Wikipedia page is as enlightening as it is somewhat humorous.  Enlightening because it says something about why fractal art is a difficult subject for things like the Wikipedia, and humorous because, well, just read this item from the Fractal Art “talk page” for yourself: 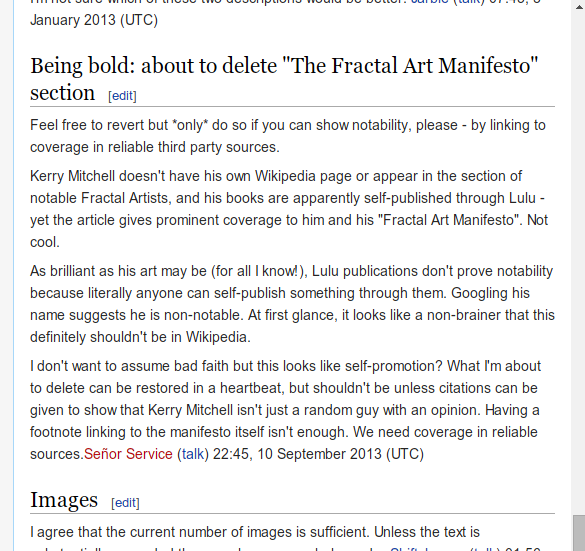 Pretty rough, eh?  But what the Wikipedia editor is getting at here is not a personal attack on Kerry, but rather a professional  attack on Kerry.  He tosses Kerry’s FAM out the window because he doesn’t see any authority behind it.  That’s why he dismissed the Lulu books: they represent one’s own efforts and not the decisions of an editor and publisher.  Like Ringess, he just sees a “personal essay”.

What I’ve come to realize is that the Wikipedia looks to build articles out of what Senor Service referred to in his verdict on the FAM as “reliable sources”.  And in the fractal art world there aren’t any.  Everything I’ve ever written would get tossed out the window by the Wikipedia as a “personal essay”.  The best of us might get our names Googled, but only to discover that we’re all “non-notable”.  There are no authorities or resources that aren’t merely the product of one person or at best, a group of friends.  Fractal art has no professional presence or institutions.  And remember, Senor Service’s Googling was done in 2013, after, not before, the esteemed Benoit Mandelbrot Fractal Art Contests and Exhibits of which Kerry was a judge all three times.  They think that’s “non-notable”?

That’s the big problem with fractal art as far as the Wikipedia is concerned: there isn’t anyone reputable enough to be quoted.  But that’s not the only problem…

Over the years a number of people have showed up and added their own artwork (personal!).  Some of them were quite relevant, but, alas, charged and convicted with link spamming.  I often admired their persistence in reposting their links in the External Link section.  So did “the Editor” who responded, finally, with this warning comment on the editing page:

Wikipedia is not a collection of links and should not be used for advertising.

Excessive or inappropriate links will be removed.

If there are already suitable links, propose additions or replacements on
the article’s talk page, or submit your link to the relevant category at
the Open Directory Project (dmoz.org) and link there using {{Dmoz}}.

But there’s a good Wikipedia explanation for this:  the Wikipedia is trying to create encyclopedia articles.  If  there’s something really good in those links then put it in the article and publish it right here on the Wikipedia.  That’s why they’re so link-averse (and why the page is so empty…).

Are we all losers?

My own opinions about fractal art would be Wikipedia-worthy if I had some fractal art qualifications; degree, office, professional designation, published in a fractal art journal.  As it is no one has anything like this –except– on the technical side, which, as I mentioned, is a completely different section of the Wikipedia: 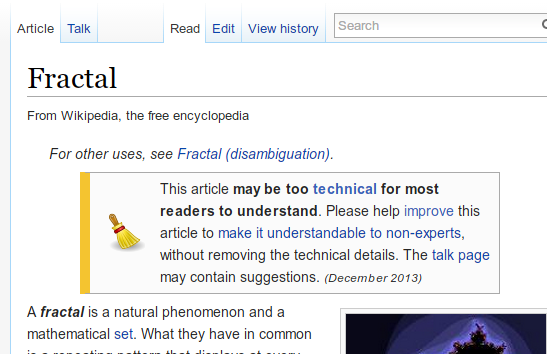 Fractal page from Wikipedia. Not to be confused with the “Fractal Art” page.

Funny eh?  The Fractal Art page is nothing more than a few simple pictures and a couple of banal paragraphs while the main “Fractal” page is up in the intellectual stratosphere, too high, apparently “for most readers to understand.”  And they’ve got real, serious external links.  There isn’t even a gigantic warning message about “{{No more links}}” on the main Fractal page.  Of course, that’s because in the area of fractal science, there’s plenty of qualified (i.e. PhD) sources and professional materials (TV documentaries, books, professional journals).  It’s makes the Fractal Art page look like some Nobel Prize winner’s retarded brother.

Alright, what to do about this?  How do we clean up fractal art and get it into the same sort of shape as the fractal sciences?

Well, I think the Wikipedia just isn’t the right venue for information on a topic like Fractal Art.  Like I said, there’s nothing official, it’s all just us amateurs and hobbyists.  The big Benoit Mandelbrot Fractal Art Exhibits were just fractal art’s link-spamming in its highest form; it’s most muscular example of “self-promotion” as the Wikipedia often calls it.  If you though the BMFAC was going to launch your career in fractal art, I’m sorry but you never actually left the ground.  Even the judges are “non-notable” as far as the Wikipedia is concerned.

Orbit Trap is the only thing closest to being a real authority in the fractal art world: 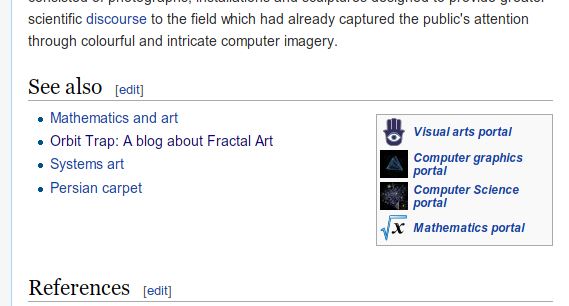 One thought on “Why doesn’t Fractal Art have a half-decent Wikipedia page?”