What fractals fail to do…

You can’t make art with them.  And we all need our heads examined for thinking we could in the first place.

I should be a bit more specific when I say, “art”.  I mean the thinking man’s stuff.  The kind of image that provokes your mind to complex, intense thought and feeling.  I don’t mean “beauty” and that sort of nice to look at thing, but rather images that portray ideas and a fresh perspective on the world around us.  One of the best examples I can think of to illustrate what art is (no pun intended) is a photograph by Ansel Adams.  It’s particularly appropriate with respect to fractal art because fractal art, to some degree, is like photography in that we “capture” imagery rather than form it ourselves. 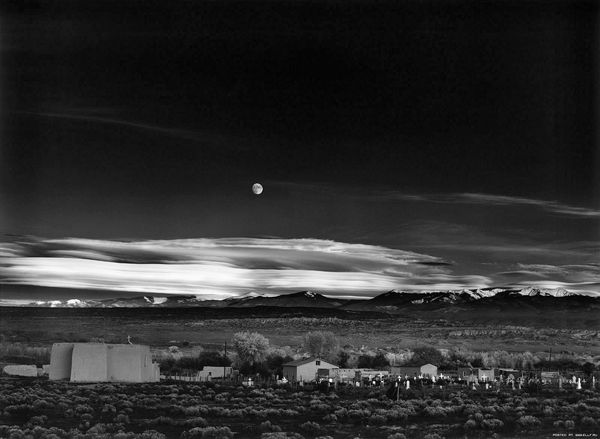 Art is like a new kind of food.  The best way to describe it is to taste it.  I can’t believe those clouds weren’t painted by Salvadore Dali.  It’s just a photograph.  But what a photograph.  This is what I mean by art.  You can’t make stuff like this with fractals.  In this photo we see everything from the momentary (the little village) to the eternal (the moon).  I think that’s how this image works in our minds but I’m guessing.  There’s a story here, a poem, written in the oldest of visual languages: landscape.

Fractals don’t tell stories because they don’t speak any of the visual languages, that being: the human form and gesture, or; landscape.  Fractals, as many have pointed out, are mostly abstract imagery or in some cases, as with 3D fractals like the Mandelbox, geometric or organic-looking objects and scenes.  None of these are capable of containing real world symbolism because they’re neither real nor capable of being altered and transformed into realistic things.  It’s hard enough to be expressive with abstract painting, it’s much more difficult when one is also limited to using just geometric/organic structures and elements.

Fractals are just too fractal.  And with respect to art, they lie in the category of “decorative arts” or what is more currently called design and applied arts.  But as decorative/design works, fractals work quite well because they often create interesting shapes with repeating elements that are easily rendered in multiple and selective ways.  Fractals have an inherent tendency to create symmetrical, highly structured and in particular: organized imagery.  It won’t ever compete with Picasso, but fractals do complement the fields of design and decorative arts.  Fractal “art” is really just fractal “design” but these days the word “art” is applied in a broad way to any kind of visual imagery regardless of its status or merit.

To say that fractals are limited to creating design work rather than art -work is not as insulting as it may sound.  Bauhaus, Art Nouveau and Art-Deco, to name just a few 20th century examples of design and decoration all share the same category and have considerable popularity and respect within the art world.

It wouldn’t be such a bad idea to compare the “fractal arts” with those of the famous design art movements of the 20th century.  Bauhaus had a lot to do with beautiful kitchenware and innovative architectural styles, something that today’s high brow fractal artist may not want to be associated with, but that’s where I think “fractal design” fits.  It’s an applied art form, a type of mathematical design: decorative, ornate and beautifying; but not really capable of depicting the kind of mentally stimulating content that has sometimes been created exclusively within the domain of the traditional art mediums (painting, drawing, sculpture..). 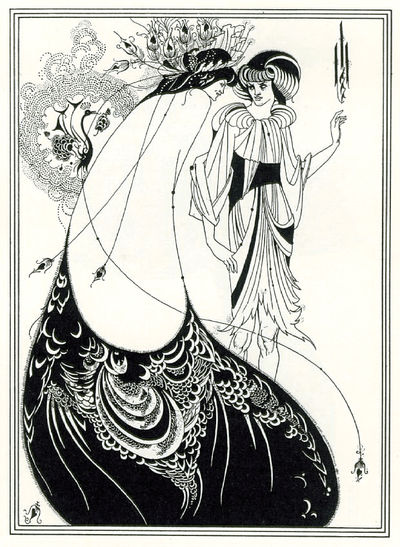 The Peacock Skirt by Aubrey Beardsley (1892)

Here’s another good example of what fractal art, ironically, can and can’t do.  Can you imagine a fractal art image like this?  Well, the shapes and designs in the image look very fractal like indeed, so in that respect I guess I’d have to say I’m wrong about all this.  But the picture is all about the “skirt”.  Fractals don’t make “skirts”, they make abstract/organic shapes.  And the skirt forms an extension of the woman’s form contrasted with another woman’s form which together are depicting some very meaningful scene from Oscar Wilde’s play Salome (according to the Wikipedia where I got this).

Once again we bump into that persistent language rich in symbol and story, that being the human form.  How can you create such an artwork in the abstract?  And not just the abstract, although that’s hard enough, how about with fractal –exclusively geometric– imagery?  You see what I mean?  Fractal imagery just doesn’t do the sort of things that the traditional art mediums do.  It can’t.  But it can produce rich, in fact, even richer designs and ornate imagery than the human mind can. 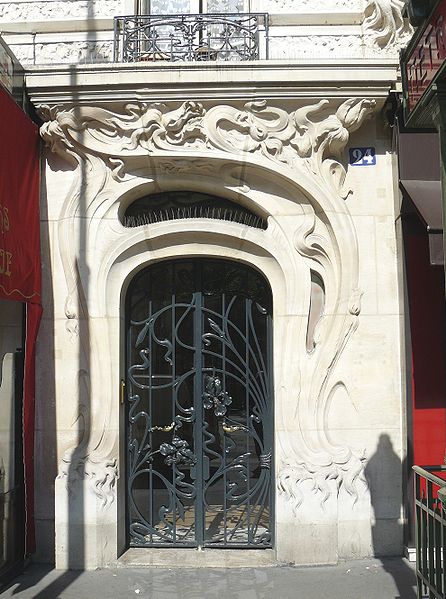 Again, this Art Nouveau example is more like what fractal art looks like than the Mona Lisa or a Salvadore Dali painting.   Fractals belong in the design arts category and it’s nothing to be ashamed of.  It’s not second-rate art, it’s just a simpler, more basic form of graphical works.  Anyway, it doesn’t really matter what I think, it’s the truth.  Fractals are design works; decorative works.  Pawning them off as a rich, expressive medium is just delusion.  And when the practitioners of fractal design pawn themselves off as artists it’s self-delusion.  Accept yourself as you are and just concentrate on creating good work; work worth looking at.  The pompous “fractals as art” posture is just a distraction and presents fractals in a context in which they fail to impress.  It’s pretentious. 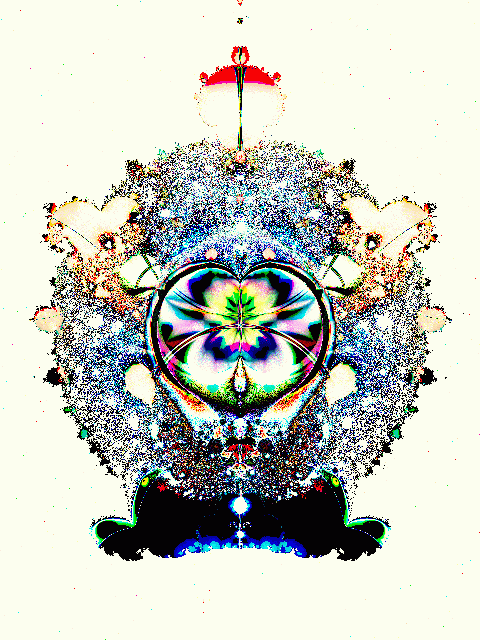 An example from Tierazon, processed a little...

I made this as an example of the design potential and decorative characteristics of fractals.  There is nothing terribly expressive or thought provoking about this image; it’s just a nice collection of shapes, textures and coloring and it was so quick and easy to make because it’s the kind of thing fractals are good at doing.  It comes natural to fractals.  This is what fractal art is and this is all fractal art is ever going to be because fractal imagery just doesn’t possess the realistic or symbolic elements that traditional art mediums can.  Even competing with abstract art is a bit of a stretch for fractals.  But when we present fractals as just plain fractals, they results are much more pleasing and natural..

There’s a few other aspects of fractal art that keep it out of the “serious art” category: such as they’re way too easy to make.  This is much more insidious than you might think.  After all, what’s wrong with an art form that isn’t hard?  Wouldn’t it mean there’s much more of it and it will soon become a rich and thriving genre?  But what it means for fractals is that any new innovation in rendering or formulas soon becomes common place and cheap –everybody’s making it.

The result is that there’s a thousand examples of everything.  This has got to have some impression on outsiders who may at first marvel at the rich detail and slick forms in fractal art until they see how normal and simply average they are.  In fractal art everything soon becomes cliche.

Unless of course one can get creative with it.  But here again fractals have a limitation that traditional, hand-made mediums don’t: fractals are made by remote control; hands-off rather than hands-on.  Of course, photography is like that too, but photography has the richly expressive world of real life to draw on and that makes all the difference.  With fractals, it’s just fractals.

I really like the Indra Pearls series by Ultra Fractal artist Jos Leys.  They have real style even though they appear to be rigidly mathematical and simply rendered.  The simple rendering and bright colors enhance the appealing mathematical design and don’t distract from it; each complements the other.  But I seriously wonder how much they’d be admired if they were as common as today’s mandelboxes, which were just as impressive when they first appeared.  Jos’ work stands out because it stands alone.

Action Painting, is a type of abstract expressionism that was based on quick execution.  It often met with a similar quick execution from its audience.  One of the main reasons was because it was, apparently, so quickly and easily made.  Jackson Pollock’s drip paintings met with similar criticism.  But unlike fractals, these artworks were deliberate constructions and expressions of the artist’s mind and the Action Painter could render almost anything a regular painter could and wasn’t constrained to the shapes and forms drawn by a fractal algorithm.

Fractals are not products of the human mind and so they lack such human expression.  It is, however, possible to manipulate (by hand) fractal imagery via layering or other graphical techniques; Ultra Fractal is well known for these kind of enhancing features.  But you can’t draw with fractals, just enhance them.  The creative scope gained from such features doesn’t make up for the limitations that fractal imagery already imposes.  Confined to using a “palette of fractals” or “toolbox of fractals”, any artist is limited to producing works of design and decoration; the kind of imagery that is composed entirely from shapes, colors and patterns –fractal-like things. 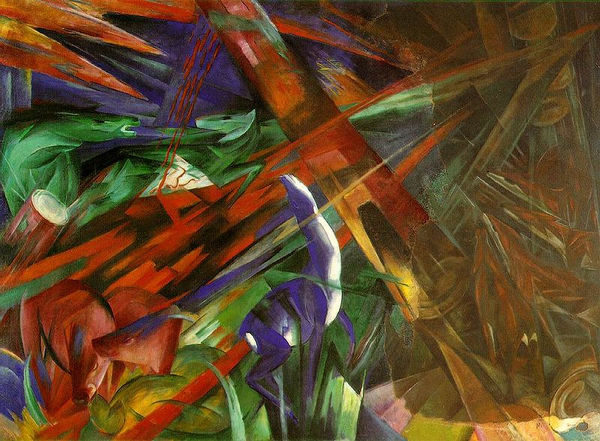 Only an idiot would ever expect to make art of this magnitude with Ultra Fractal: The Fate of the Animals, by Franz Marc, 1913

A word about “abstract photography”: fractal art could be described as fractal photography, but photography captures realistic imagery which has greater symbolic expression and subsequently greater creative options when it comes to making thought provoking imagery, the kind of imagery which I’m saying fractal art can’t produce.  Abstract photography (although there really is no such thing, strictly speaking) would theoretically be common ground between the fractal genre and those serious art categories like photography because capturing abstract imagery is what fractal art really is.  I  mention this because it appears to be such a great loop hole for the apotheosis of fractal art, it’s entrance to the higher worlds of Picasso, Dali, da Vinci, etc…

But it’s really just a type of regular photography where simple shapes and weird close-ups are the preferred subjects.  It’s stuff that features the simple, almost geometric beauty of things like frost crystals and satellite photos. 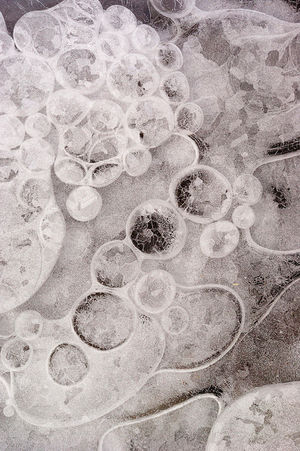 We can make some pretty wonderful things with fractals.  A lot of the newer software like Ultra Fractal allows for greater complexity of fractal compositions beyond the simple, single-layer screen-saves.  But none of that has done anything to change the perennial problem in fractal art which is that fractals have such limited expressive potential that they are unable to create works that rise any higher than that of the decorative art and graphical design categories.  Using fractal software to create the more serious types of art work, the kind of works that have defined the apex of art –portraying challenging ideas and big time intellectual things like zeitgeist– is simply impossible and out of reach for fractal artists no matter how high they try to leap and jump.  You just can’t make serious art with fractals.