I’ve been reading a book about various “-isms” in the art world. Eagerly wanting to follow in the footsteps of those great, outspoken artists of the past and to contribute something new and personal to the exciting pursuit of labels and the ever teetering tower of human achievements, I propose… Clickism.

First rule is: Mouse clicks only.

Second rule is: Start with any kind of image you like, but when you get finished the result should bear no resemblance to the original and in fact, can only be connected to it, with some doubt and lingering uncertainty, by careful DNA testing.

Third rule is: One level of undo, only. Clickism is forward thinking and reflects the relentless progress of technology which refuses to admit mistakes but rather sees them as a challenge and attempts to correct them with more clicking.

Fourth rule is: Stay lazy. Sure you can open your image up in a graphics program and start masking and layering and all that sort of artist stuff, but “painting” is not clicking. Better yet, use software that won’t allow you to use advanced graphical techniques, with the sole, and very important exception of….

Fifth rule is: Photoshop Filters. Freakier the better. It doesn’t matter if they don’t add anything of value to the image –yet, it just makes for more excitement, and the challenge I mentioned in the Third rule, of trying to make something awesome out of something apparently hopeless and growing increasingly dark and shapeless. 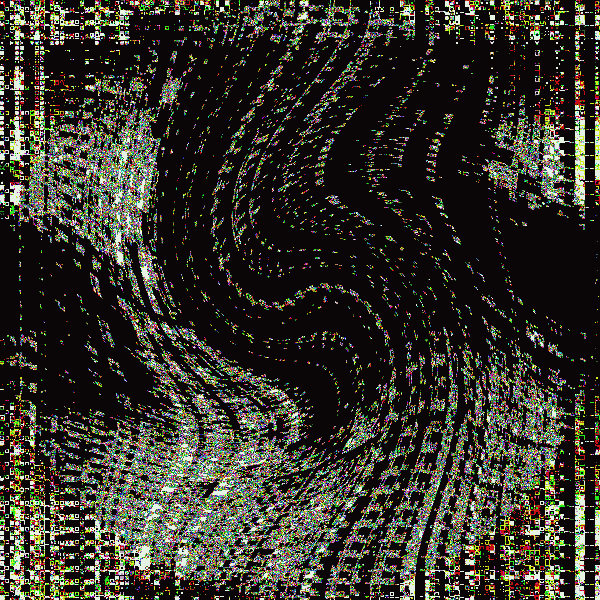 the horror, the horror …of Clickism

Sixth rule is: If you can remember where you came from, then you haven’t gone far enough. Apply several crazy filter effects just to get warmed up, and then let ‘er rip! Pretend you’re being stalked or followed by a crazy man or some insane wild animal infected with rabies or a strange new disease introduced by aliens crash landing their spaceship in a remote and forested region and you’ve got to lose them by choosing a series of completely unpredictable and incoherent choices. If the crazy man or the animal catches up, let them help out. Always have a clear idea of where you’re going and don’t go there.

Seventh rule is: More filters. That which does not crash your program will make you stronger. Don’t ask “why?”, instead ask, “what if?”. Look for ones that are “helpful” to the team not necessarily “useful” on their own. Distortions or anything that makes simple but random shapes are always useful, eventually. You never know what will be the final filter that turns something progressively awful into the Mona Lisa of Clickism.

Eighth rule is: The rules are never finished. Ask yourself, “What could I do that I haven’t done?” “What am I not thinking of?”. When you think you’ve reached the end and can’t make anything that even looks half good, then you’re just tired. Get some rest or do something else. Pretty soon you’ll be back and ready to set sail like Sindbad on a new voyage filled with more of the surprises and mysteries of Clickism.