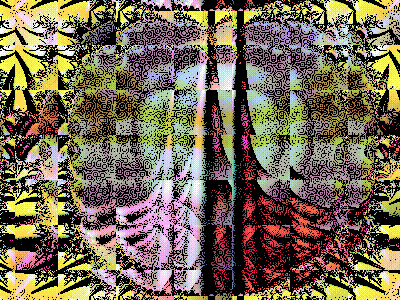 Would you expect this from someone named “Ilyich the Toad”?

Once again, I’ve dug up a new and amazing Photoshop filter and I want to share the wonder…

But it’s got a dirty name.

I tried renaming it, but you can’t do that with Photoshop filters. Or at least I don’t know how. But everytime I go to use it, which is like 200 times a day, I click on Ilyich’s favorite nic name for this filter. 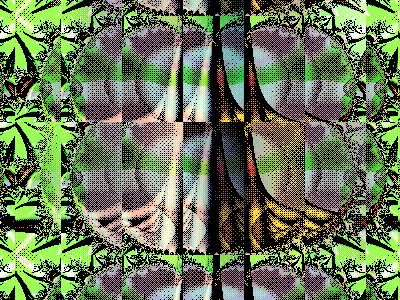 At first it seemed evil. The Toad connection didn’t help either. Now I’m just curious to know why he gave it such a name.

It’s one of those chop-up/multi-lens distortion effects. It doesn’t alter the color and has only two sliders, but it can be extremely creative.

After using it for a couple hours, you will have trouble readjusting to the non-chopped, real world. Unless you’re a house fly. I think this is what the world looks like to a house fly.

The Missiles of Shangri-La 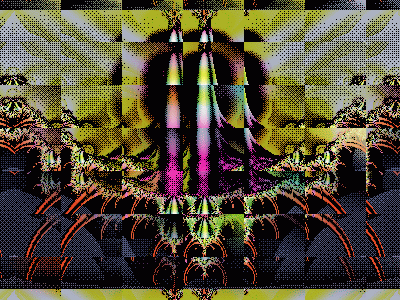 That’s what I thought of the moment I made this… Can I still call it a fractal? Maybe I’ve gone too far. I’m the first to admit it.

“Kurtz got off the boat. He quit the whole scene.”

Maybe I’ll just refer to it as “Crystal.8bf”. Couldn’t he have called it “Betty’s Crystal”?

While I’m on the topic of unique labelling for menus and parameters, I ought to mention another interesting set of filters I’ve found by someone called “Kangaroo”. One filter has four sliders for adjustment, labelled: “does something” “not sure” “can’t say” and “I forgot”. Another has three sliders named: “don’t know” “don’t care” and “leave me alone”.

Sometimes when it’s late and I’ve been on the computer too long, I start to give senseless names to images when I’m saving them, like “Fuludoo” or “Fugunoofoo”. So maybe Ilyich and Kangaroo just ran out of names.

Using the sliders allows one to fragment and repeat the image in interesting ways. Instead of creating a single distorted image, you can create a series of images that are clear but have a distorted arrangement.

Go ahead, pet the fractal, he won’t bite 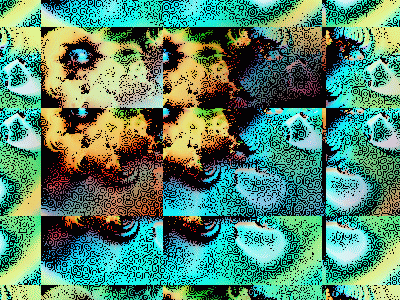 Honey, where are the kids? Didn’t you tell them they could go swimming?

“His mind is rational, but his soul is insane”

What started off as a cheap and gimmicky effect began to become a powerful artistic tool once I began to see what it did best and began to combine it with the India Ink filter by Flaming Pear. On its own, the crystal filter looks too fake like a cheap digital trick. But treated with the patterns of India Ink, it jumps into a whole new category of creative effects.

I think that’s one of the secrets to digital creativity: synergy -digital recombination -frankensteining. Or to put it another way: harmonizing -taking hydrogen and oxygen and making water.

4 thoughts on “Postcards from Shangri-La”