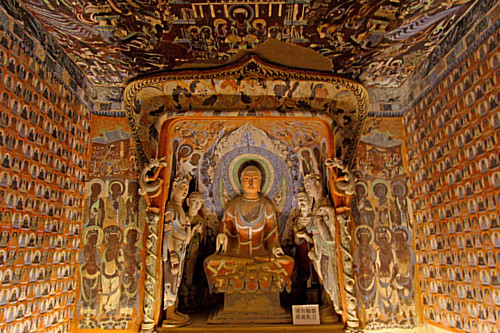 One of the many illustrated Mogao Caves in northwestern China

Alright, maybe it’s just me but the image above and just about everything else in the Mogao Caves bears a strong visual resemblance to what I see in fractal programs.

What I see in fractal programs:  That might be a new way of defining the term but I believe it’s the most relevant in the context of visual art. This is because fractal formulas when rendered exhibit a discernible style to them just like the work of a painter like Van Gogh or Gustav Klimt or an architect like Frank Lloyd Wright does.  Think of all fractal images as the work of just one artist: would you not suspect he was possibly inspired by the type of artworks we see in the Mogao Caves? 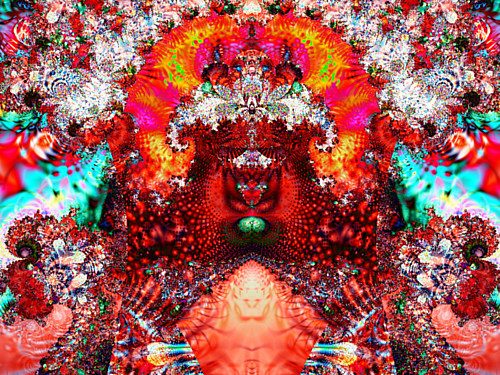 So, what are the visual similarities?  What’s the family resemblance between the Buddhist cave and the fractal image?

It’s not just the visual style resemblance; illustrated caves seems to work like fractal programs too.

Notice the little, tiny buddha-circles on the side walls in the photo and the little red, dot-balls in the central area of the fractal, one the “walls” of the fractal?  Obviously there’s no close fractal equivalent to the human form so all we can compare the statue of the Buddha in the center of the cave with is the prominent central shape that occurs very often in fractal images (especially in Sterling).  In this fractal it appears to be breaking out of a clearing in the clouds which frame it’s “head” like a garland of flowers or crown of brilliant clouds. 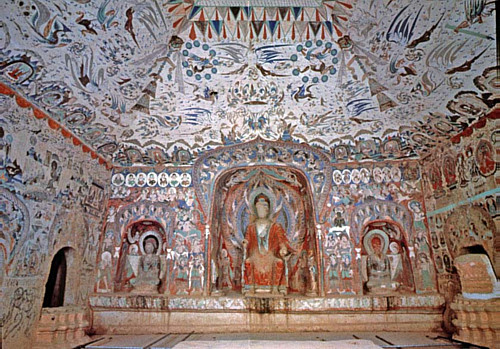 Another of the Mogao Caves 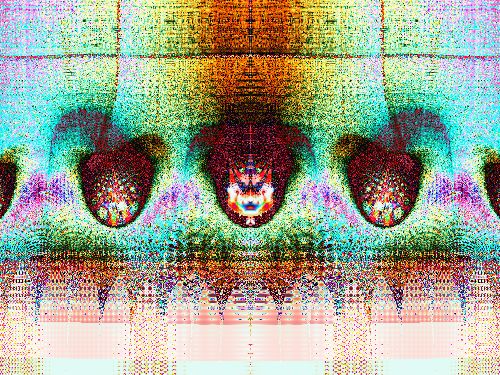 Another of the Sterling Caves

The similarity comes from more than just the three niche elements; although you will notice that the fractal niches are all proportional and complimentary to each other like they are in the cave example.  This is what I mean when I’ve said in previous postings that certain kinds of imagery are natural for fractal formulas to make.  Symmetry, hierarchical order, and profuse detail and ornamentation come naturally to fractal images.  The Buddhist art in the Mogao Caves (and elsewhere) exemplifies these same visual aspects for religious reasons to convey and express religious ideology.  The are, in a sense, what I would call “Divine Diagrams” and it should come as no surprise to anyone familiar with fractals that fractal images often bear the same elements but, naturally, in a generic way.  Fractal images could easily be used for symbolic purposes in a number of religious contexts.

One interesting bit: notice in the fractal, below each of the niches, there are similar “stains” just as one sees below the niches in the cave photo.  Perhaps it’s from burning candles or food offerings or some sort of weathering?  In the fractal, of course, it’s just part of the formula rendering.

A couple other similarities to point out: 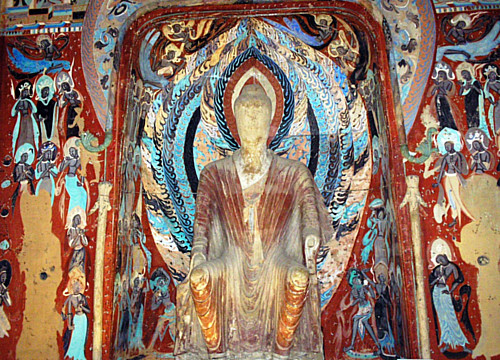 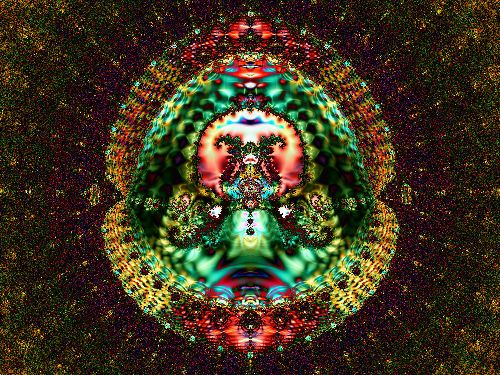 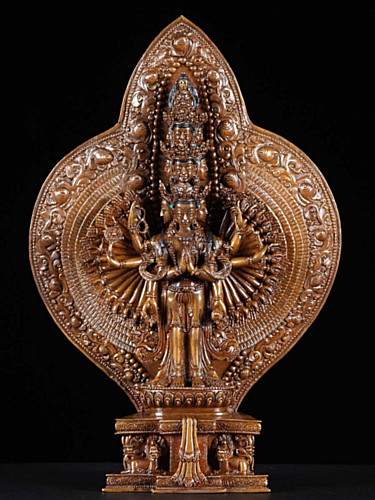 Visvarupa Lokeshvara; not from the Mogao Caves but still Buddhist or Hindu or both.

Some of the same similarities occur here with respect to shapes, frames, borders, hierarchy; I think you get the idea now.  I added the last one, a statue from somewhere, because it really emphasizes the design similarities between fractal imagery and these Buddhist paintings and statues.  The last one looks so much like the fractal image that it’s hard to believe it came first.  But this is my big point: the type of imagery that fractal programs produce has existed for centuries in the form of Buddhist religious imagery.  And, if you’re familiar with religious art in general, many forms of religious art and symbolism have this fractal program resemblance .  In fact, it has no particular correlation with any one religion, I just happened to notice it for the first time while browsing the Mogao Caves on the Wikipedia.

I’m sure I’m not the first person to notice this fractal art / religious art connection.  In my next post I expand the comparison of fractal imagery with the whole spectrum of religious art showing that the elements and style of religious art are in fact inherently fractal and therefore the sort of visual art that fractals produce easily, prolifically and to perfection.