I think the recent image by Guido Cavalcante, made in Ultra Fractal and used in a posting to illustrate the oceanic garbage dump phenomenon, is a good example of the contrast between art and craft, two concepts which I discussed in a recent post.  In a nutshell, I defined art as expressive imagery and craft as ornamental, decorative imagery.  These differing functions set art and craft apart from each other: art functions as a thought-provoker and craft functions as a table cloth.  Sorry, I’m being harsh.  Craft is visual beauty; pleasing to the eye and exhibiting the visual novelty of the medium that it’s made from –silent and elegant.

Guido’s image is an excellent, text-book example because, with all due respect to Guido, it has no real value as craft.  By this I mean that the image as a decoration is not very appealing.  In fact, the image is actually rather ugly and revolting.  No one would want this as their desktop wallpaper or printed on a coffee cup.  Anyone sending this out as greeting cards to their friends and family would have to be an environmental activist intent on awakening their social circle to this oceanic waste disposal problem.  Your Mom won’t be displaying a card like this in the living room if you send her one.

Your Mom might, however, when discussing what her children are doing, or when discussing environmental issues, bring out the card to show you what her son has told her about garbage in the oceans and how he’s using his artistic skills to impress the issue in the minds of others.  Notice the context that the image might be used in:  it’s always associated with the topic of oceanic garbage and never as a pretty picture.

Now, the image could have been something visually attractive and ornate and then might have been something displayed on a coffee table in the living room (art doesn’t have to be ugly) but the effect that such a prettier image would have as an expression of  this environmental problem would likely have been much less.  The focus of art is on expression and not decorative appearance.  Of course, if the artwork deals with a different idea or concept other than the contamination of nature, then it may be something that could be appreciated for it’s visual beauty or style as well as whatever expressiveness it might have.  Some works of art just look nice up on the wall and add to the decor of a room in your house.  Here’s one: 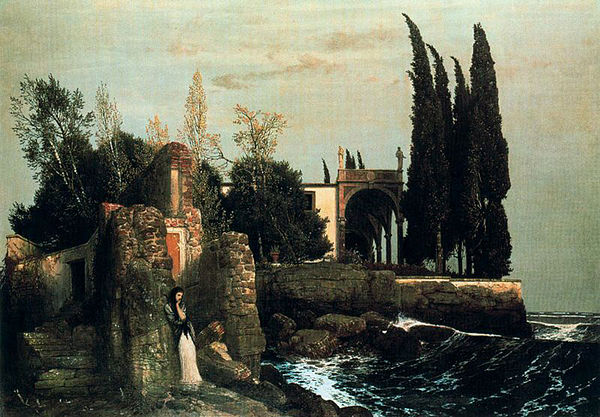 Villa by the Sea by Arnold Bocklin

Bocklin’s image has some nice natural scenery in it and illustrates (no pun intended) the huge amount of skill and craftsmanship that an artist needs before they can even begin to create art with such realistic subject matter.  The painting medium is hard work and in addition to all that effort Bocklin has added his own dreamlike vision with surrealist elements (eg. note the size of the waves and yet she and the area around her is dry and strangely peaceful and remote).  I’ll bet most people looking at this image have all sorts of thoughts moving through their head.  Thoughts they wouldn’t have if Bocklin had merely painted a nice natural scene by the sea.  That would have been nice too, but it wouldn’t have had the mental engagement that makes the actual painting a work of art rather than a work of craft.

It’s the same with Guido’s The Garbage Path; what impresses us with that image is the haunting view of garbage out in the middle of nowhere which appears to be silently approaching.  I’ll bet the impression most people get from looking at Guido’s image is exactly the same as that of the sailor that Guido quotes in his posting who unexpectantly discovered this garbage dump for real by sailing into it.  What is the refuse of cities doing way out in the clear, clean ocean?  This is worse than the imagery of cities buried in garbage from the Disney movie, Wall-e.  What’s so sinister about the subject of Guido’s image is that garbage doesn’t belong there, our world is no longer what we think it is, and that the oceans have become a toilet that can’t be flushed.  Guido’s image does all that.

And that, dear readers, is the difference between fractal art and fractal craft.