With 3D printing technology, fractal art can cheaply and easily enter the domain of sculpture.  It’s an exciting development and offers the ever dazzling world of fractals another venue in which to capture that proverbial and elusive, “mainstream” audience.  Will this be fractal art’s big break or just another demonstration of how hard it is for “normal” people to relate to fractals?  But first a little explanation of the technology.

They call it 3D “printing” because the objects are built up, layer by layer, from the bottom to the top.  This is “additive” rather than the old fashioned “subtractive” method of carving out the object from a block of material like they do in machine shops.  There are various 3D printing processes, some resemble an inkjet print head or laser plotter moving around quickly adding layer after layer of 3d pixel bricks while other methods fuse the powder in a large sand pile into smooth, delicate pieces with the precision of a master craftsman.  (Here’s two basic links for more info: Wikipedia: 3D Printing, and a very good Economist article.)

Naturally it all starts with a 3D digital model.  And although I’m sure there’s got to be some limitations as to what you can make with 3D “prints”; such as you can’t have parts of the model floating in mid-air; it looks like the only real limitation is your imagination.  That is, what you can dream up in a 3D digital program.

Here’s where fractals have the real advantage: what could be a greater source of 3D dreams and imaginative works than 3D fractals?  What could be a more exciting and better use of this custom sculpture technology than rendering the kind of complex and beautiful 3D fractals we’ve seen fractal artists making for years?

Consider what this new technology means:  Isn’t it just like the early days when fractals were first graphically rendered –in 2D?  That was the great debut of 2D fractals and this is the same historical event but now in the much more sophisticated medium of 3D.  Fractal art has now moved into the medium of sculpture and would it be premature to expect it to take on a much more radical popularity?  Who can come up with more amazing, and a much more prolific amount, of 3D objects than a fractal artist?

Jeremie Brunet (aka bib) has been posting photos on Fractalforums.com of his recent 3D prints made at Shapeways.com, one of the leading 3D printing companies.  Shapeways will render your 3D image file and also give you a gallery on their site so you can exhibit it and even sell them to the public, just like Deviant Art does for artists with 2D prints.

When I first saw Jeremie’s photos on Fractalforums I thought they were just digital images using a new photo realistic rendering technique.  As we all know, 3D digital art can look pretty realistic these days but as it turns out his photo realistic images were real photographs of real objects, some of which were sitting in his hand.  I think it was the sight of that hand that started me thinking, “What the what?” 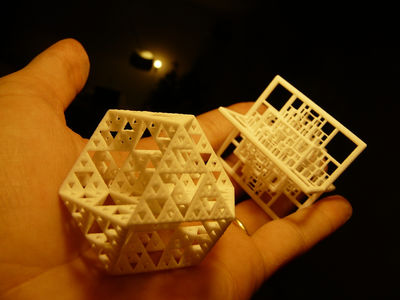 3D printed fractal by Jeremie Brunet (in the Master’s hand) posted to Fractalforums.com 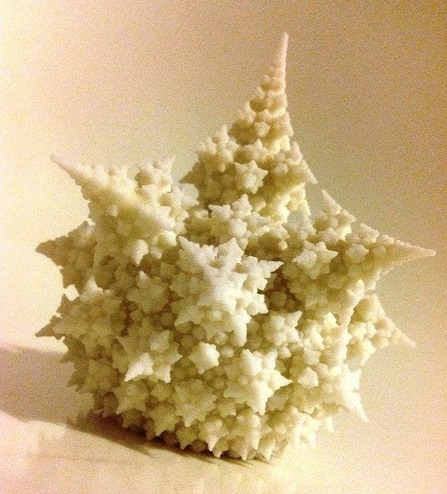 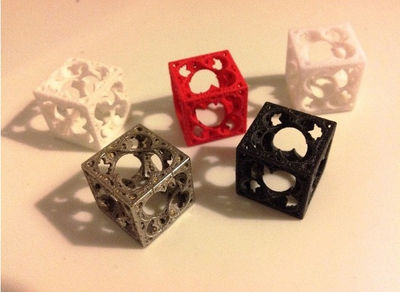 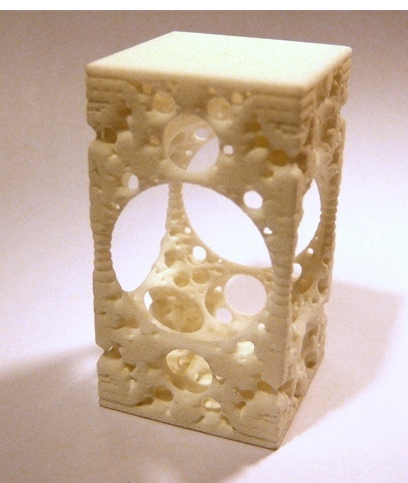 There’s a lot more by Jeremie in this post, Shapeways for 3D printed fractals. Some are metallic and others, like the Box Pillar above, show you how detailed and “fractal” the images –sculptures, really– are.  It literally is the equivalent of printing out a fractal image in 3-dimensional form.  You can see more of Jeremie’s sculptures at his Shapeways.com account.  In fact, you can buy your own copies of some for as little as $6!  Buy some before he becomes famous. 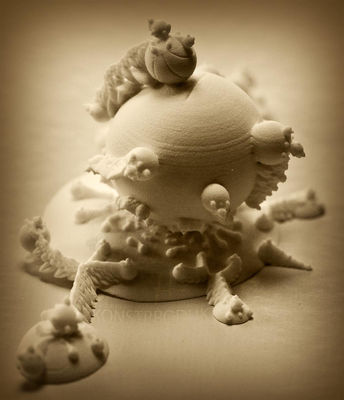 Jeremie isn’t the only one getting into this.  Here’s an excellent example by Kraftwerk (aka Mandelwerk, Johan Andersson).  Fractals should have the potential to be the Michelangelos of 3D printing because no other method creates such intricate and novel objects with such ease and in such quantity.  Compare the 3D print above with the original, “virtual” 3D image below: 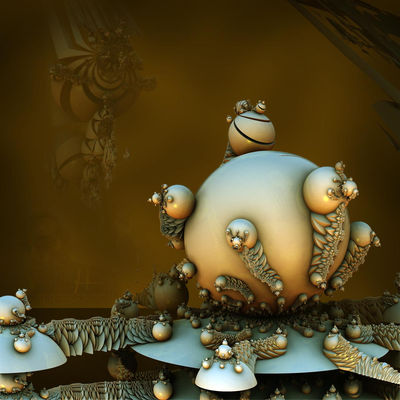 Although the 3D “print” isn’t as rich and nuanced as the original image, it does illustrate how the aesthetic qualities of 3D fractals can be transferred to a 3D printed object.  And the process is only going to get better –and cheaper.  A fractal on every coffee table –or hanging from every rear-view mirror like CDs were back in the 80s.

Here’s a short, two minute video from Shapeways.com showing how their 3D printing process works and how it can work for you:

My favorite bit in the Shapeways video is where they lift the finished products out of the sand.  It was like seeing buried treasure being uncovered.  Your 3D files and Shapeway’s machine can turn that industrial sand pile of theirs into a never ending archaeological treasure hunt in the Valley of the Kings.

Of course fractals aren’t the only thing that’s being “printed” there.  But like I said in my introduction: what could compare to the visual wonders of 3D fractals?  They’re sculptures; mathematical masterpieces that you can hold in your hands.  They’re things that no human mind has imagined or could imagine.  What is there in the world of 3D printing that could possibly rival fractals for the top spot?  What could turn the heads of anyone once they’ve stumbled upon the mathematical majesty of 3D fractals?

How about My Little Pony?  Yeah, look at this: 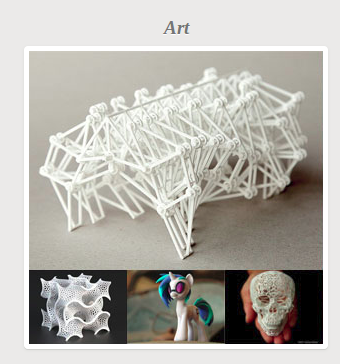 Art category from the front page of Shapeways.com

And skulls.  Who wants to look at the wonders of math made flesh when they can oogle over an ornately carved human skull?  Fascinating, isn’t it?  It’s this apotheosis of mediocrity that really struck me when I visited Shapeways.com: 3D printing hasn’t changed a thing for fractal art.  It’s still the same old world where people’s attention is monopolized by trivial things and stuff they’ve all seen before.  What in the Sam Hill is wrong with society?

Now of course Shapeways isn’t trying to promote “art” they’re really just trying to promote art sales, that is, sales of the 3D objects exhibited on their site.  It’s just like Deviant Art going out of their way to get visitors to buy prints of the artwork they’re browsing and thereby convert as many of their visitor stats into art sales.  Shapeways is a business.  But so is just about every art gallery, too.  Art has always been commercial.

I think Shapeways can give us a little insight into how fractal art fits into the rest of the art world by virtue of how much or how little they showcase 3D fractals over 3D skulls and 3D cartoon characters.  For what it’s worth, in the “Art” category image above, fractals, or at least something geometrical, has equal billing with My Little Pony.  Let’s look at some other 3D printing categories: 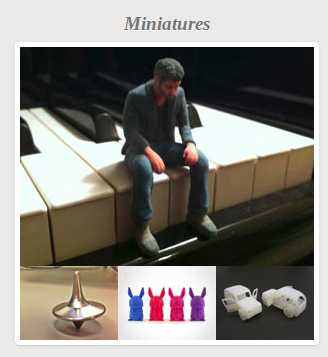 Fractals have intricate detail but apparently there aren’t any on Shapeways to compete with Loser Man, or spinning tops (are they geometric?), little cars and the inevitable cartoon bunnies.  How about another category?  Can I have the envelope please… 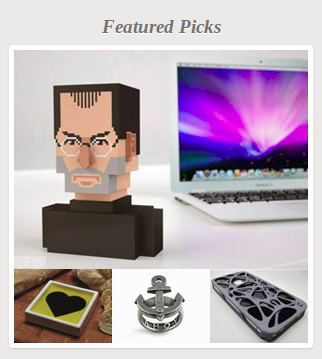 Oh!  “Featured Picks” and not one a fractal or anything geometry-like.  Just a Steve Jobs Lego-like head, an iPhone case (kinda fracktally) and, well, who cares what those other two things are?  Perhaps Shapeways is trying to feature the capabilities of their 3D printing technology more than the quality of the items that can be made?  Even still, wouldn’t Jeremie Brunet’s second image, the geometric cauliflower thing be a much more impressive example of 3D printing?  Or is Shapeways more interested in showing how –ordinary– the output is?  How it can be like: all those cool things you’ve seen before.

Jewellery holds some promise for fractals, I think, based on the geometric, curio-type objects being showcased there.  What could be more “curio” than 3D fractals? 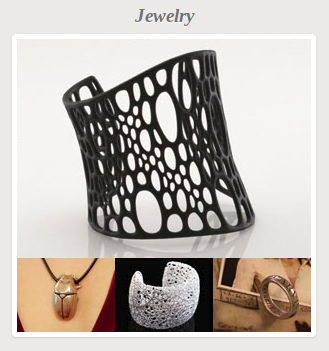 Check it out for yourself, but so far I think the audience for 3D fractal printing is going to be the same audience that already exists for 2D prints.  Despite the inherent qualities of 3D fractals to astound and amaze in 3D format, most of the world still seems more interested in the things that they’re familiar with and have an established presence in the traditional arts and crafts world, such as skulls, cartoon characters and mobile phone cases (the tie-clips of our time).

Is there something about fractals that makes them too odd and weird to ever have mass appeal?  I get the impression that fractals are something that most people have an immediate but brief interest in and can’t get interested in on any sort of deeper or more lasting level because their appearance is inherently artificial, synthetic and unnatural looking and for that reason lacks the warmth and attraction of real world objects and imagery.

It looks like fractals are still a niche art form and always will be; whether they’re in two-dimensions or three.  But maybe it’s too early to render such a verdict?  Could there still be a massive invasion of 3D fractals into the mainstream world?

One thought on “3D Printing: Will this be Fractal Art’s Big Break?”