I’ve been looking at some mash-ups lately on Flickr ….and I was browsing around on Samuel Monnier’s site ….and July 4th, Independence Day in the States is coming up, …which is similar to Canada’s own national holiday on July 1st called Canada Day … I thought, “America Day” …and here’s two images of that great icon of America, the American Flag …and they’re both fractal, sort of …here’s Fractal America …the deeper you look, the more you see ...how close can you get? 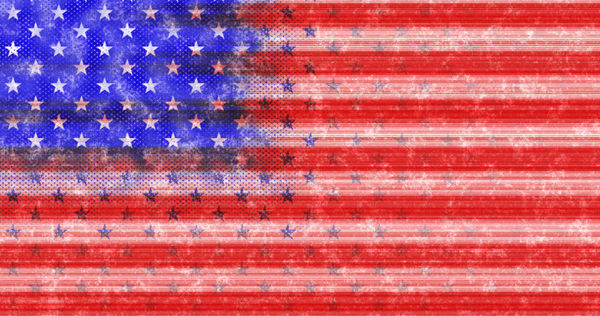 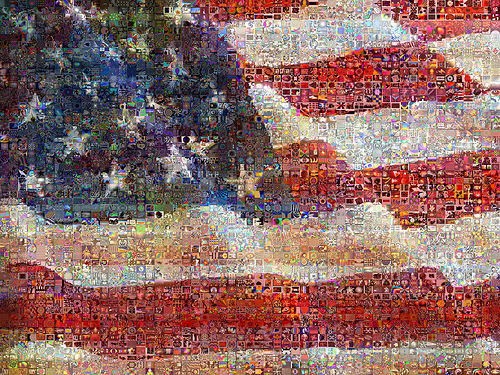 United State of Art, by qthomasbower (on Flickr.com)

Click on either one to see a larger version with much more detail.  Samuel Monnier’s image leads to a page where you can view the image in enormous detail.  He uses a special flash applet that allows you to practically explore the image to the same degree you would be able to if you were viewing it in the original fractal program (Ultra Fractal) that made it.  If you haven’t seen one of these before, it’s well worth a look.

Can the image of a national flag (especially the American flag) be purely something to look at and not have political overtones?

Because it’s a symbol.  Our minds just refuse to look at it as if we’d never seen it before.

In social situations, if you want to avoid controversy, “don’t talk about religion or politics”.  But the American flag is both  politics and religion to many people –and not just the Americans.

In Canada (where I live) you will probably hear much more said about Americans and America than you will in America and among Americans.  Canadians are funny that way.  And so is much of the world.  No one see America (and Americans) quite like foreigners do.  And no one seems to talk about them as much as foreigners do.  Canadians, however, see America in a more powerful way because we are both foreigners and yet, in many ways, very american ourselves.  I won’t get into it right now because it’s too convoluted and confusing, but suffice it to say that Canadians embrace America with one hand while at the same time trying to get in a punch with the other.  It’s very hypocrital and juvenile and, I’ll come right out and say it: it’s very colonial.  Colonial-minded peoples are afraid of independence —they think they’re going to lose something.  Americans, on the other hand, enthusiastically fought for independence –because they thought they would be gaining something.

And there, in a nutshell, is the difference between Canadians and Americans.  Canadians like to complain about the government and you can’t do that when you’re independent because you’re only complaining about yourself.  Americans like to fix the government and to do that you need independence and self-government.  America wrote it’s own constitution.  Canada was content to let the British Parliament do it for them.  As a Canadian I’ve always found it surprising that my fellow Canadians don’t seem to see this as a huge national embarrassment:  Canada is an act of British Parliament. America was a reformation of the acts of British Parliament (“new and improved”).

See?  Already things have gotten political.  I’m so glad that art doesn’t have to be that way.  Let’s talk about art instead.

Samuel Monnier says that fractal art doesn’t have to embrace social and political themes in order to be considered “serious art” and that if you browse through artworks of the past you’ll find many examples of good art in which these sorts of themes are not involved.  Maybe he didn’t say it exactly like that, but he’s right.  The works of Joan Miro and Paul Klee would be considered “serious art” and yet they (rarely) had any connection to what one would call social commentary.

Of course it would be a great compliment to fractal art if it also had some artwork that did engage in social commentary.  It’s not necessary (as Sam says) for fractal art to be earn the label, “serious”, but it would add another dimension to the genre.  And political themes can be quite engaging and thought provoking.

Qthomasbower’s flag is, on the other hand, a deliberate attempt to provide social commentary:  A vast mosaic of many artworks forming (by overlaying an image of the flag) a diverse but united nation waving majestically in the wind.  I think the technique is easier than it looks.  Nevertheless the result is fascinating.  It really has the detailed and intricate wonder of an image made by the iterations of a fractal formula.

Qthomasbower has some more of these on his Flickr pages.  Unlike Monnier’s image, Q’s doesn’t look so hot when you zoom in.  It’s kind of like the “digital zoom” on a camera;  the picture just becomes chunkier and cruder as you move in.  I’m sure he’s not implying that the state of American art only looks good from a distance and when covered by the imprimatur of The Stars and Stripes. 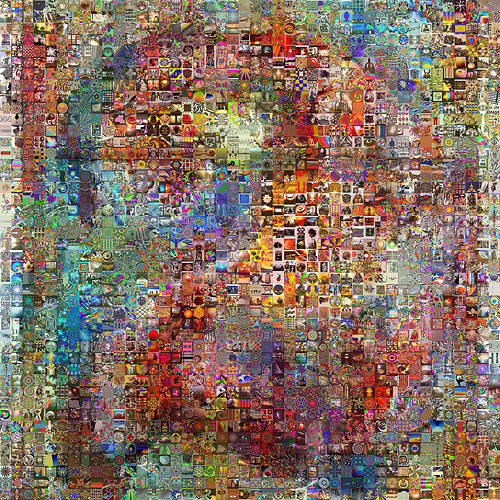 I find these mash-ups of Q to be very interesting because of the detail and texturing they give to the image when viewed at large.  I think almost any sort of half-decent image would look fantastic when treated this way.  It gives a large-scale and massive appearance to the image because of the non-repeating and highly detailed texture all the individual image “tiles” contribute.  The mash-up contributes really only a texture layer, but the effect, as I’ve said, is very impressive.

So.  Is America a fractal?  Does it have self-similarity at many levels?  Do parts of it descend down to zero while others escape to infinity? And why does a Presidential election with only two candidates take so long to render?