For those of you young-er folks who have grown up with computers and the internet and consider all that technology and online media to be normal, you don’t know how really dull and boring things were before home computing came along.

My biggest technological thrill when I was growing up back in the early 70’s was owning a short-wave radio.  I was like 8 years old and  I remember tuning in some Eastern European radio station that seem to play nothing but a station identifier composed of a short sound bit of an orchestra playing a few notes.  It was a real magical experience.  It drifted in, then out, and just when you turned up the volume to hear it better it came blasting back again, bouncing off the ionosphere or something.  Nowadays we can watch webcams from the other side of the world.

Another big thrill for me was taking electronics apart and just seeing what happened when I shorted out parts of the circuit boards.  Things would click, lights would go on or off, and once in a while some smoke would appear.  As long as the thing was only powered by batteries it was perfectly safe, I guessed.

I owned a cassette tape recorder the size of two bricks, the kind with big white piano-like keys to control it.  I got a real technology thrill from recording friends and family members and playing it back to them.  They got a thrill from that too.  An even bigger thrill came when I discovered that if I touched parts of the solder covered side of the circuit board with my bare fingers when a blank cassette was in play mode, various musical squeaks would jump out of the speaker.

Roy Orbison, a musician from West Texas was once asked by an interviewer, “Why have so many talented musicians come from West Texas?”  Roy responded with something to the effect that, “There’s not much to do in West Texas so people have to come up with ways to entertain themselves.”

And now back to the creative abuse of technology:  Pete Edwards of Casper Electronics (“the friendly ghost in the machine”) had been doing some very advanced tinkering with common electronic equipment.  His own words and his two YouTube videos here say it all.  It’s something to think about when we leave this little bit of West Texas and head back to the New York City of Fractal Art.  I’m not talking about where you live but where your mind is.  The online Fractal Art world is mostly a little social club devoted to self-congratulation, as I think Terry’s recent series commenting on the folks over at Deviant Art has shown.  If you’re already in West Texas then I’d suggest you stay there; you’re not missing a thing. 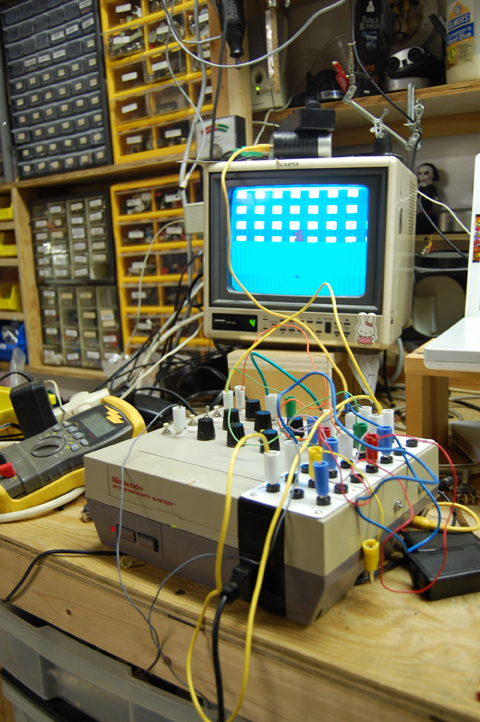 This is a modified Nintendo video game console. It is a very simple bend and is a lot of fun to play with. To bend this unit I simply added a patch bay to a handful of points on the video processing chips. The Display can be tweaked by either connecting points together or by feeding in external signals, like audio or voltages from my modular synthesizer. the video shown above is an example of how the visuals can be controlled using clock signals from my modular synth.

I guess it works a bit like a light organ.  Here’s a video Pete made showing the setup in action:

Here’s another of Pete Edwards giving a live performance.  It’s not too visual (because it’s rather dark) but the music, or sound sculpture, is interesting.

2 thoughts on “Where is the West Texas of Fractal Art?”