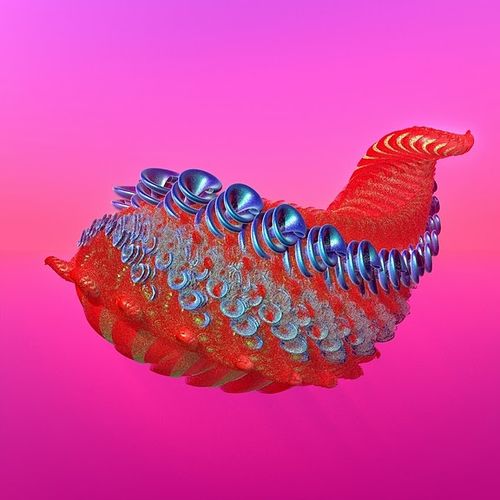 I don’t like slick computer art but I like Daniel Eaton’s Incendia gallery. The more polished and “professional” computer art gets the more it reminds me of advertising and other kinds of soulless, slithering graphical lifeforms. But Daniel Eaton (aka “Apophysitis”) has somehow managed to construct creative and appealing imagery with a program I had considered to be just another eye candy machine. Maybe Incendia is something special in the world of 3D graphics or maybe Daniel’s success with it just shows that it’s not what tool you use that matters but how you use it.

Although these images are, for the most part, simple and lacking the “wow” factor that most 3D galleries seem to indulge in, they have a real appeal to them. Their simplicity gives them their style. I think most computer artists tend to pull out all the stops and do a “glitz-blitz” on their images. But I think making good digital art is as much an exercise in using restraint as it is in getting the most out of the software.  I think that’s why I found Daniel Eaton’s Incendia work so interesting.  I’ve selected an even dozen to review here. 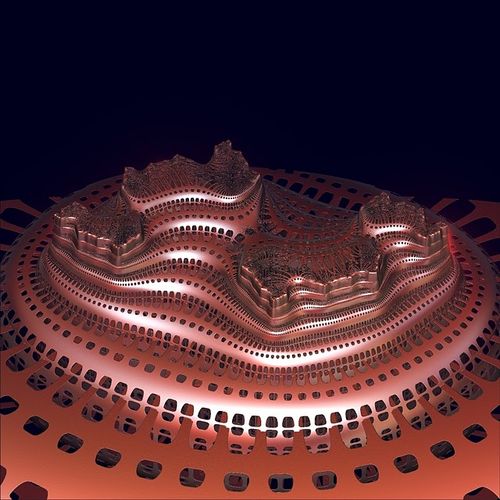 20080815113333_1: Fractal Philishave? Nicely done and not overdone. Note how the simple coloring enhances the look of the smooth metalic surface and allows the perforated detailing to be appreciated.  Or were they just the default settings? 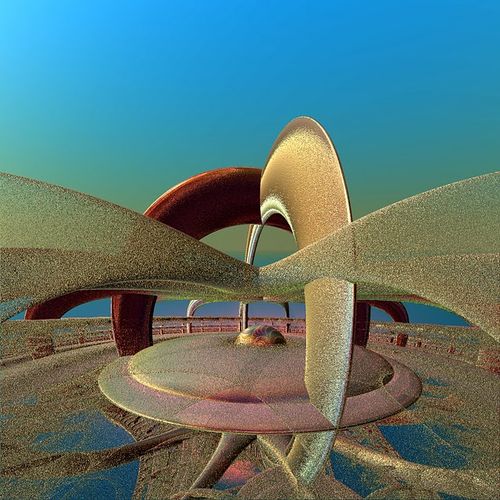 CircleCity Perspective_1:  This one has a real 3D look to it and the simple sky and lighting all fit together to create something quite vivid.  The coloring is good too.  Notice the grainy, “sand spray” texture.  Daniel uses that quite effectively in some other ones I’ve reviewed here. 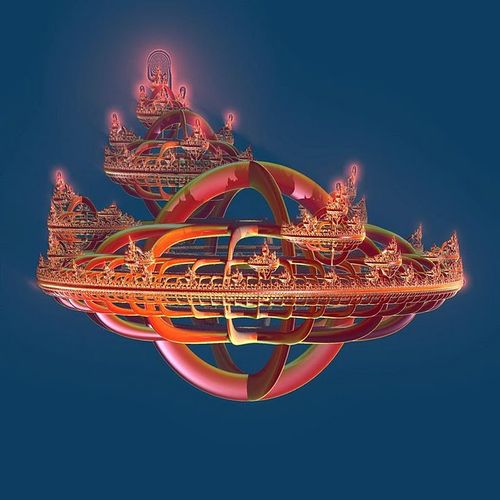 Circle City_1: Chariots of the gods?  It has an Eastern look to it.  The fuzzy glow makes it interesting and combined with the ray-traced appearance that the lighting and shadow gives, the effect is one of mystery and transcendence.  I’m starting to hear chanting, so let’s move on. 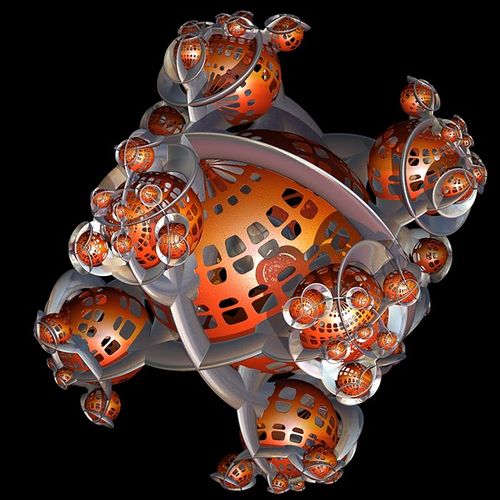 20080821005011.bmp_1: Another fractal assemblage and it ought to be a fairly ordinary image except, once again, this one just seems to shine in a special way.  Maybe I ought to check out more Incendia galleries.  I know Xenodream makes 3D fractal images like this, but I don’t remember seeing so many interesting images like this in a Xenodream gallery.  But again, I’m guessing the difference is made by the artist and not so much the program. 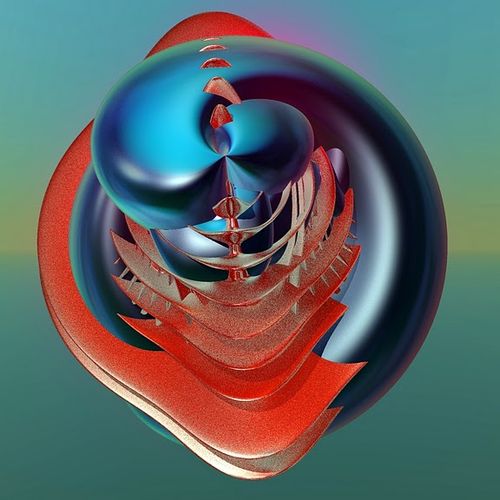 20080812211300_1: I don’t know why this one made my short list from the 435 images Daniel has on display in his gallery.  Yes, that’s four hundred and thirty-five.  And those just the ones he uploaded to Picasa.  Digital tools tend to make us all very productive.  It would have taken a lot of time  and considerable expense for a painter to produce 435 paintings.  But that’s just the way digital art is.  The old palette and beret crowd just can’t keep up with us, space-age artists. 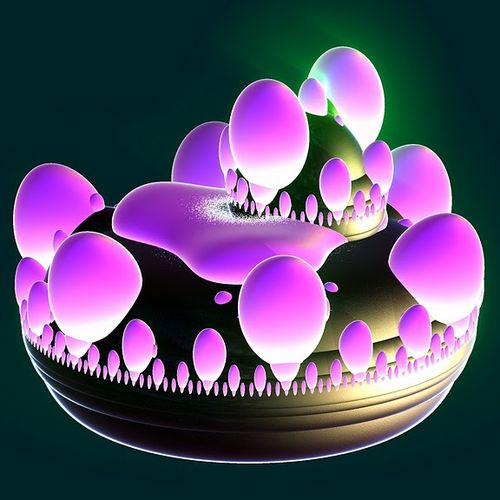 At our feet the glistening river of fire plunged down again in a magnificent flaming fall. Below, its luminous liquid was spread out in rivers and lakes and canals, over all the vast plain. The channels ran through an amazing jungle. It was a forest of fungus, of mushroom things with great fleshy stalks and spreading circular tops. But they were not the sickly white and yellow of ordinary mushrooms, but were of brilliant colors, bright green, flaming scarlet, gold and purple-blue. Huge brilliant yellow stalks, fringed with crimson and black, lifted mauve tops thirty feet or more. It was a veritable forest of flame-bright fungus. 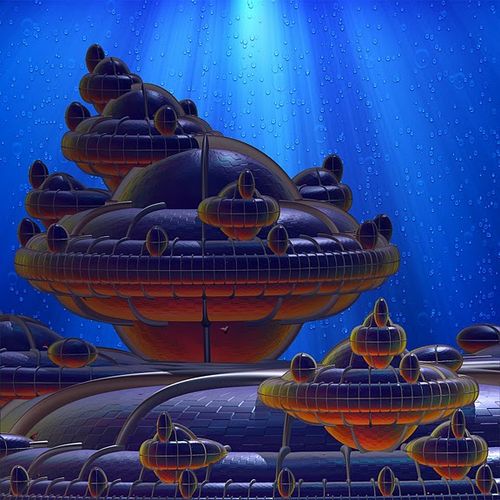 What_Lies_Beneath… Far out, eh? Jack’s got something classic pulp sci-fi to say about this one too:

In the center of this weirdly forested subterranean plain was a great lake, filled, not with the flaming liquid, but with dark crystal water. And on the bottom of that lake, clearly visible from the elevation upon which we stood, was a city!

A city below the water! The buildings were upright cylinders in groups of two or three, of dozens, even of hundreds. For miles, the bottom of the great lake was covered with them. They were all of crystal, azure-blue, brilliant as cylinders turned from immense sapphires. They were vividly visible beneath the transparent water. Not one of them broke the surface. 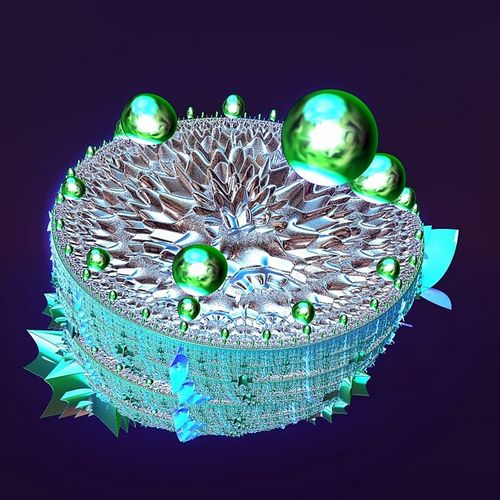 GreenCandyBowl_1: Jack never envisioned anything like this silver-topped, metalic blue wedding cake, but then who could have envisioned the sort of imagery that digital artists produce today back in the 30’s?  Even now it’s hard to describe how digital art like this is made and relate it to the more traditional, hand-made methods of making artwork.  One thing I like about computer art –and this image is a good example– is the unrealistic, alien, spacey appearance that the imagery often has.  The sides of this “cake” look metalic like the foil covering of a satellite.  Not to mention, of course, that it’s hard to say what it is, or even label it.  Computer art is quite creative in that sense. 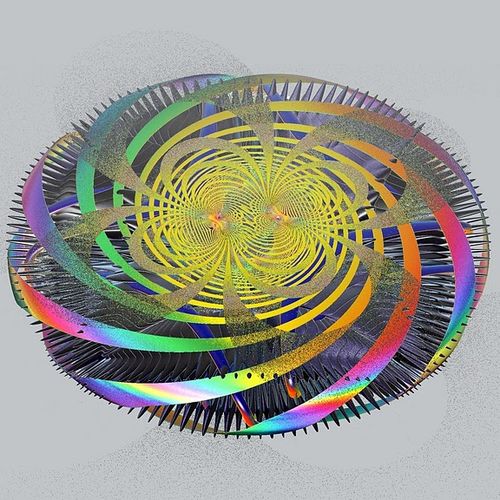 20080811152915_1: It’s got the rainbow colors that normally look pretty tacky, but combined with the sand spray and the little knives –all on a simple gray background– the overall effect is a good one.  How many 3D artists would dare to use such a plain background when they could chose from any number of textures?  But the simple background here is what I think makes the whole work look balanced. 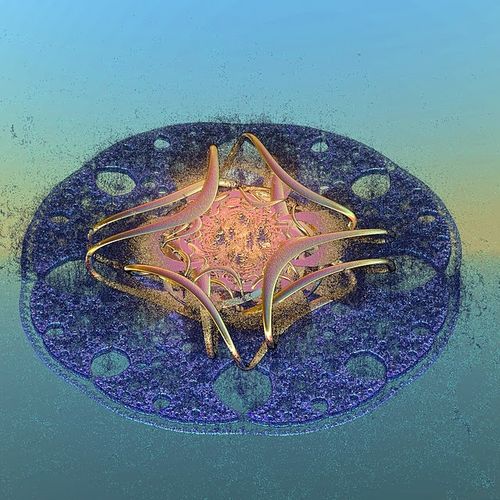 Sand dollar_1: This and the last one are my favorites.  The graininess complements the 3D imagery by adding some variety and complexity to what would otherwise be another shiny plastic clone.  Sand Dollar_1 has a Da Vinci, Renaissance look to it I find.  Very subtle coloring and a style that is rather non-digital.  I guess sometimes fractals, even 3D fractals, just need a little extra rendering help (or a few accidental effects). 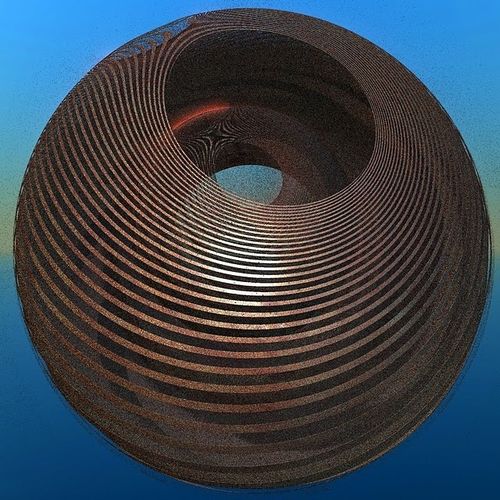 RustBowl_1: A very simple structure and yet intriguing.  Notice the small glowing line inside the ball; that’s the sort of subtle touch that I think sets Daniel Eaton’s work apart from the other.  The simplicity to this image almost makes me think it’s non-digital and something silk-screened.  Everybody’s got their own tastes when it comes to digital art –especially 3D artwork– but I find Daniel’s work to have a style all its own and one worth taking a look at for why it’s so effective in a medium that seems to thrive on excess and complexity.

Daniel’s work is significant because, as I mentioned earlier, I believe the better, more interesting –more creative– work will be made by artists like him who can get a good grasp on how to use their software tools, experiment with them and use their features when they serve a purpose and not just as defaults and requisites. I’ve come to realize that computer programs are not like the traditional hand held tools that painters and other artists use. Getting creative with computer programs requires an experimentalist type of personality that instinctively pursues new and sometimes oddball ways of using a program –not to make art but to just explore and experiment.   Computer art is an art form of remote control: driving robots and controlling machines in a place we can’t go.

Mastering established techniques and having great self-discipline is not necessary in digital art like it is in the traditional arts. Digital art favors people who like to goof off and just have fun. That’s what’s wrong with fractal art: hard work never pays off and that’s why so many are so poor. A good program, a playful attitude and at least one good eye; that’s all you need to make good computer art. Funny thing though, there don’t seem to be that many people around like Daniel Eaton who can do that.