I found his gallery on Flickr during a routine search of the word, “fractal”.  I clicked on a couple of unusual looking thumbnails and quickly headed straight to his main gallery page. 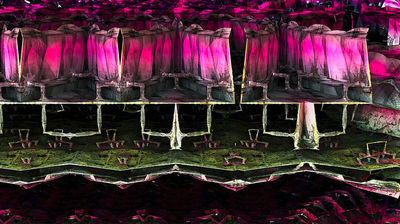 walls and plumbing by Ronald Fitch

Ron uses one of the 3D mandelbulb programs but he must be pushing some different buttons because his work is quite unique.  In fact, for the image above Ron says this:

one pattern is good but two may be better. This seems to be a set of booths with plumbing. The booths are colored with a painting by the great Lyonel Feinniger, one of his paintings of boats for which I have yet to find a really good use. The lower level is a bit of Miro.

I guess he’s using a texture mapping feature from the program and instead of a standard texture he’s used that feature to apply a famous artwork on the surface of the mandelbox structures.

The effect can be quite powerful especially when he starts to embellish the final image with other items: 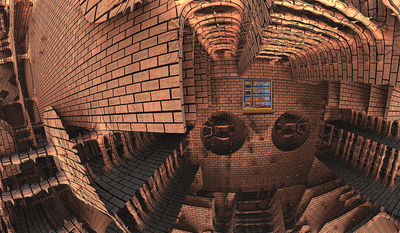 fins of bricks by Ronald Fitch

The window makes for an interesting touch and is a further example of how introducing realistic elements in 3D fractals can work quite well.  With the old 2D fractals such photoshopping usually  came out looking odd and unnatural. 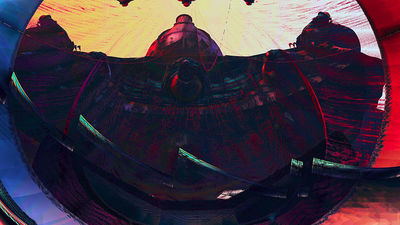 afternoon view or the tower by Ronald Fitch

Ron’s got a real eye for the unusual and creative.  Who has ever made a Mandelbulb image as freaky as that? 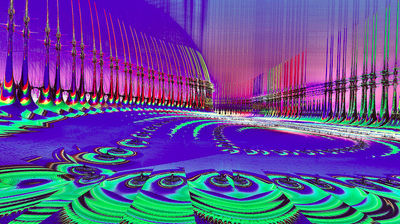 This is the type of fractal image I describe as “raw style” although the Mandelbulber programs tend to make imagery that is much easier to relate to than the old style 2D programs.  It’s worth viewing this one on Flickr by clicking on the “actions” button and viewing the largest size image.  I think you can jump right there via this link.

The gallery page says this about the image:

This is derived from two images combined with Dynamic HDR, a program meant for somewhat different purposes. This is easily done with two or three versions of the same image. these can differ in various ways but one must be darker and one lighter.

That’s High Dynamic Range Imaging (HDR), a high-tech photography trick that allows you to combine several photos of the same thing taken under differing conditions of focus and lighting and produce a composite image that has the wide range of detail that more resembles a drawing or painting than a photograph.  I’ve never heard of anyone applying it to a fractal image, although some layering techniques probably approach the same sort of composite effect.

Here’s a couple of Ron’s photos that exhibit the HDR effect: 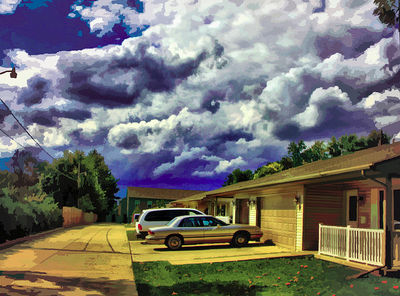 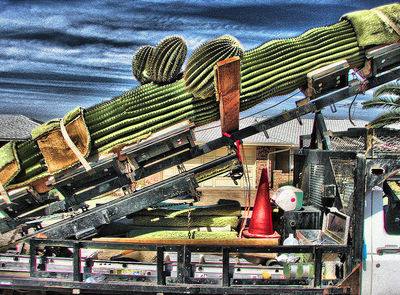 cactus truck b by Ron Fitch 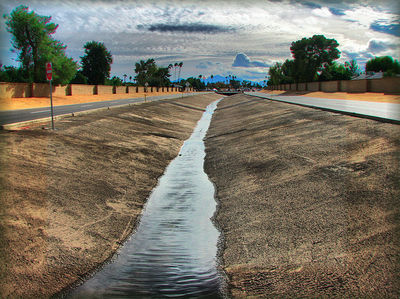 water ditch 1b by Ron Fitch

It allows you to capture an entire scene despite the widely contrasting light and contrast and put it all together in a single photograph in the way only a painter would have been able to do before.  Of course, you need a good photograph to start with otherwise the final result is only of technical interest.  I really like all three of these despite the fact that the subjects are quite ordinary.  But it’s the mark of a good photographer that they can produce something interesting from the ordinary.

The top image of the cars and house is incredibly mundane and yet it’s got some strange spark to it.  Ron’s also processed it a bit which may not be as evident in the low-res example here.  But still, it’s a real accomplishment to turn the mundane into the magical.  The water ditch has an old-time tinted photo look to it. 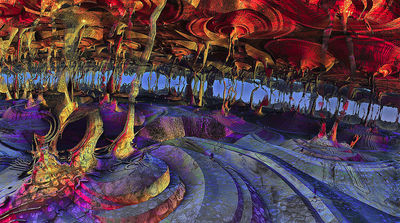 rutted road through the wilderness by Ron Fitch

The old and the new; the rough and the smooth.  Notice what humble titles Ron gives to his works.  I’ll bet he never thought he’d someday be a big star on Orbit Trap.  Let’s hope he stays this humble.

Ron’s unique rendering style shows through in the top one.  It appears more hand-crafted than formulaic.  The coloring further adds to the old-style feel.  Rather good composition in this one which can be a real challenge in fractal art. 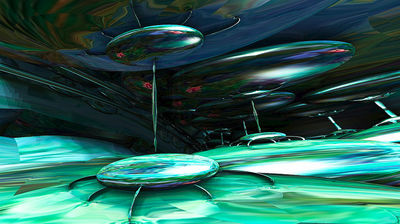 interconnections and bus by Ron Fitch

A relatively simple image and yet the contrasting “movements” between the interconnecting objects in the foreground and the rushing bus in the mid-ground are instantly apparent and captivating.  It’s surprises like this that keep so many artists browsing around in the Mandelbulbs/boxes looking for just one more.

Well, there you go.  Now you know Ronald Fitch.