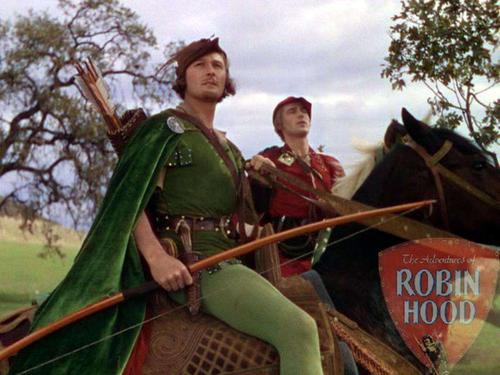 As the Robin Hood of the Fractal Kingdom, I feel compelled to take up the cause of our fellow countryman, “Fitz” and right the wrongs of the evil Prince John and his minions, the various Sheriffs of Nottingham known in today’s Sherwood Forest as “The Selection Panel”.

Fitz’s claim is that –well let’s let Fitz speak for himself: 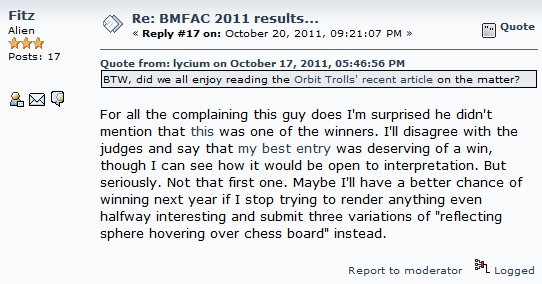 “Reflecting sphere hovering over chess board…”  Ouch!  You know what he means by that, right?  Cliche shiny stuff that comes from safe, elementary choices.  But let’s consider his claim for a moment, not whether it ought to be in the winner’s circle or not, because my review of the 11 “losers” in the winning circle shows that Fitz’s entry is certainly better than any of them; but rather lets ask something much more radical, something Fitz probably would not even have suggested himself: Was it not in fact one of the best entries?

Here’s Fitz’s entry that he’s referring to as “my best entry” in the screenshot above which forms a hyperlink to this image: 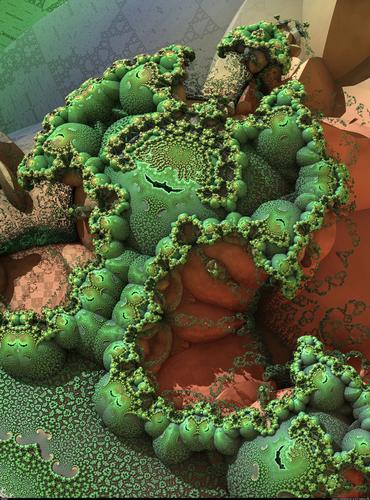 In Fitz’s comment he was comparing his image with another which he referred to as “this” which is a link to MarkJayBee’s (Mark J. Brady’s) winning image: 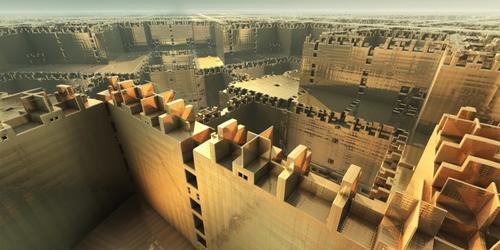 Judging art always has a subjective aspect to it because we don’t all “like” the same sorts of things (i.e. taste) but I’d say that Fitz’s image is superior to Marks simply by virtue of the complexity and variety of imagery found in it.  Mark’s is still a good one and he makes a lot of good images like this, but I think Fitz’s is just more interesting and presents much more “fractalness” in it.

Note the top left area in Fitz’s image shown here in a detailed screenshot from the high res version on his Deviant Art site: 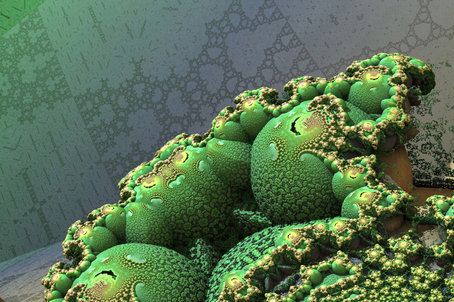 Fitz’s image is really detail-rich and the details have quite a variety to them.  Here’s another detail from the bottom left corner: 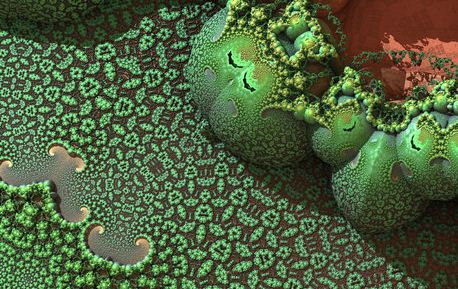 Then, taking a closer look I discovered this subtle detailing in the left mid-ground: 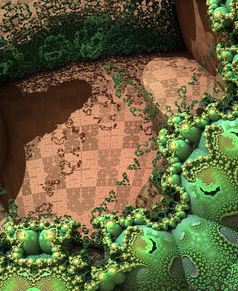 Mark’s image is one which features perspective and fine metallic/glass surface texture and as such wasn’t intended to be (I’d guess) a “rich detail” type of image.  So in that sense we’re comparing apples and oranges, which is a pretty common occurrence in fractal art since there is such a wide variety of imagery with a similar wide variety of characteristics.  In short, it’s not fair to compare Mark’s image to Fitz’s with respect to fine detail; one ought to simply compare them on the basis of general artistic impression.  That is, which one do you like –more?

I like them both! –but I’d agree with Fitz that his Biomass image (he entered more than one image) is a “stronger” entry than Mark’s.  But Mark’s entry is still light years ahead of the”losers-eleven” group I posted about but it’s a little too plain and offers only the effect of panoramic depth to make an impression.  Fitz’s works on many more levels although Mark’s is still a good example of 3D fractal art.

But could Fitz’s image be the best?  This is a somewhat difficult thing to say, but since the Benoit Mandelbrot Fractal Art Contests in general have majored on selecting minor artwork, it’s not hard for anyone to question their choices and rank a non-winner above all of the winning selections.  Besides challenging Mark’s image, what other good images are close to being as good as Biomass that we should compare it with? 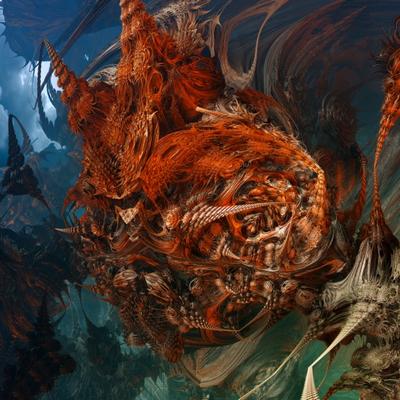 I like Johan’s artwork in general and like I said in a previous post, he and the other really good 3D fractalists didn’t submit their best works to the BMFAC.  On the other hand, I happen to know from hanging around Fractalforums.com (the Arc de Triomphe of fractals) that this image has been particularly popular there and those folks are a tough crowd with Parisian standards when it comes to art.  Well, c’est dommage, I agree it’s good but I think Biomass is better.  I don’t care for the smeared, wispy look and prickliness of the image but a lot of other people seem to.  Mind you, the coloring is pretty good and the detail is almost as good as Biomass’ making it a good example of that graphical aspect of fractal art.

What other winners can compete with Biomass for top spot?  Oh yes, Hal Tenny’s famous metal works.  Undoubtedly one the the best images in the contest: 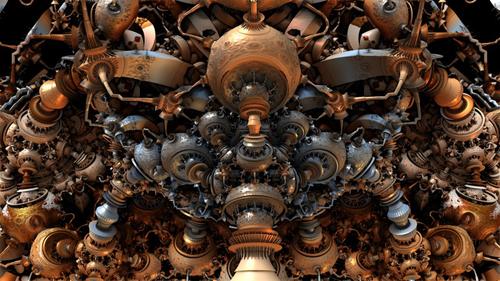 Well this is a tough one.  Who isn’t amazed when they see one of these ornate metal tube and sphere marvels for the first time?  Totally fractal and yet it looks totally like a photograph of some wild metal sculpture.  And lots of intricate detail; a virtual fractal pipe maze.  Coloring is nice, too.  Hal Tenny really is a great fractal artist even if he does hang out with complete jerks on Deviant Art.  I’d say Biomass is tied with this one.  I really can’t say it’s better because Gordian Twist is such a masterwork and such a unique variety of 3D fractals.

Alright, a tie for first-place?  Or second?  Is there any other winner that Biomass needs to contend with? 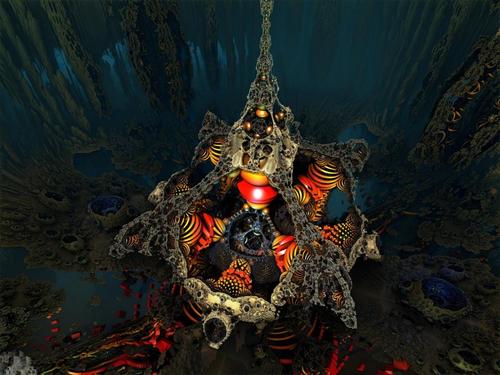 Nice one, eh?  Jeremie is putting on a show in Paris as announced here on Fractalforums.com from November 24-29, 2011.  He made this very professional looking poster to advertize it which shows how eye-catching this image of his is in a different context: 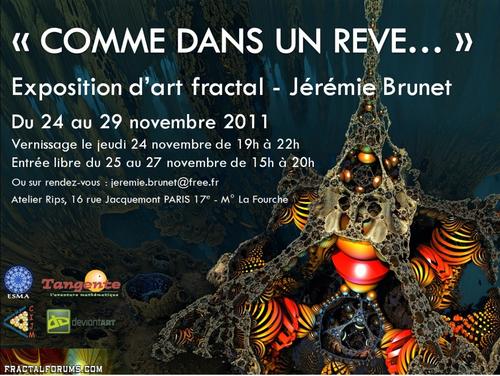 What can I say?  It’s a great image and it has something that many fractal art images often lack: focus.  The multicolored deep sea base is the intended subject of the image and it just naturally works that way.  The color couldn’t really be better.  The overly bright yellows and reds fit in with a undersea scientific base (I’m guessing that’s what Jeremie was thinking).  The use of fog and just about everything else at the artist’s control has been used to maximum effect.  It’s no wonder they chose this one for the exhibition.  Another tough decision.  I’d like to rank Biomass just above this one because the bright coloring is just a little too much for me, but I think I’ll give it a tie with Biomass just like Gordian Twist by Hal Tenny.  A three-way tie for first place, so far.

Who else in the BMFAC winners can challenge Biomass for the top spot?  If you read my post on the “losers” of the BMFAC you’d already know that I’d picked Aztec Flying City by Bernard Bittler as my top choice.  Dave Makin, a BMFAC judge, thinks it’s junk, or as he says, “bog-standard/run-of-the-mill“.  Let’s take a look:

It’s panoramic; nice use of color; great perspective; variety of 3D fractal imagery; excellent use of Photoshop cheating.  Cheating?!  Well, look at those clouds dragging and snagging on the “flying city” thing on the right side of the image.  I don’t think any of the 3D fractal programs, including Ultra Fractal added those clouds (did you know UF can make mandelbox images?).  I don’t want to start any fights or anything, but the use of graphical “post-processing” in the 3D fractal world is pretty obvious.  But I guess after years of in-house UF post-processing it’s a little hard for the UFers to complain about guys like Bernard adding clouds to their “fractal” images or combining three different fractal formulas into what is really nothing short of a “collage”.  But let’s not go there right now.

Sorry Fitz.  The experts have spoken.  If Bernard’s great image is “bog-standard/run-of-the-mill” according to just one of the “experts” and still placed in the top 25 to make it a winner, then I guess the judges must have really thought yours was trash to place it even lower than those 25 winners and even beneath the 10 “honorable mentions”.  Personally I think Biomass was one of the top 4 but I’m neither an expert nor particularly “prestigious”.

I think there’s a good possibility that Biomass was the victim of politics.  The organizers didn’t want the exhibition to be completely taken over by 3D fractals and so they let in a lot of (relatively weaker) traditional images and that’s what bumped out such strong images such as Biomass.

Most of the good fractal art being made today is of the Mandelbulb/Mandelbox/Hybrid something or other/3D variety.  The BMFAC despite my earlier concerns certainly didn’t shut those kinds of images out, but did they really go far enough and give 3D fractals (like Biomass) their rightful portion of this year’s contest winners?  They couldn’t.  It would require passing over the old veterans (has-beens) that the BMFAC alone considers “prestigious” and “representative”.

The contest has changed with the times, but it hasn’t changed as much as fractal art has –it’s not contemporary fractal art anymore.  The 2011 BMFAC has chosen a lot of fractal art that is old style and no longer impressive and certainly not representative of the art form today.  2D images made with complicated layering in Ultra Fractal belong in the last decade.

I wonder though; have folks like Fitz changed their mind about the BMFAC?  I’m sure he’s not the only one who’s been left scratching his head wondering what on earth the judges were thinking when they chose so many mediocre entries and passed over so many good ones.  In a thread on Fractalforums.com back in August, 2011 about the BMFAC 2011, Fitz seems to treat Orbit Trap’s criticism of the BMFAC as a rather trivial matter.

“Hilarious mental image”  Well, that was back in August.  Here’s his response to the actual judging two and a half months later in October, 2011: 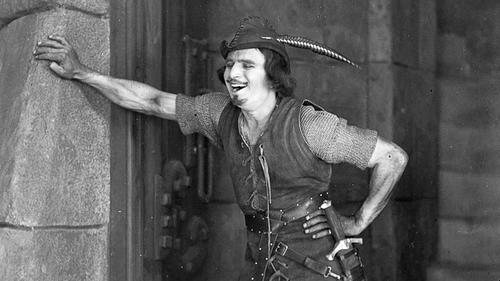 Yes, my fellow countrymen of Sherwood Forest, Prince John’s Fractal Art Contest (PJFAC 2011) is not worthy of great fractal artworks like Fitz’s Biomass.  But now “methinks” his Sheriffs of Nottingham on the Selection Panel aren’t so much a “shady board of fractal art” so much as they are just plain bad judges of fractal art.