This is nothing radical, of course; many sites do this sort of thing, but here on Orbit Trap it’s going to be much more exciting and lively.

I thought I would launch this regular weekly feature by reviewing a very well done piece of Fractal Artwork by Kerry Mitchell, an artist everyone in the Fractal Art world probably knows of.

It’s not one of his recent works; the collection’s dated August, 2004 on the Ultra Fractal website. I know many artists prefer to have their current works reviewed rather than things they’ve done a few years ago, but I think this one has such a strong sense of style that it’s worth taking the time to take an extra-careful look at this one. 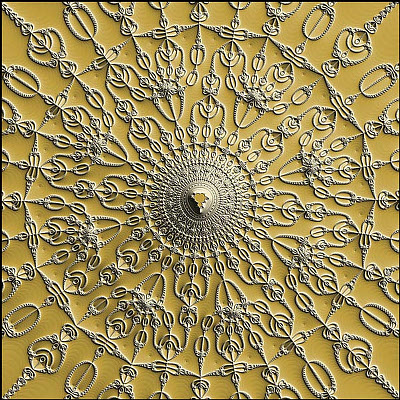 Simply put, what I like about this image is that it’s an excellent presentation of what could be called “classic” Fractal Art, and directs one’s attention directly to the elegance of the fractal formula. If you don’t like images like this, then you don’t like classic, hard-core Fractal Art. (Yes, there is such a thing).

Everything that has been done to the image compliments and enhances the appearance of the fractal imagery and doesn’t obscure it or steal your attention from it. In fact, the image has a very natural, almost photographic look to it.

If one was flipping through a coffee table book on Arab artwork and style and saw this image, few people would question it’s reason for being included, although they might comment on it’s unique appearance. No doubt, that’s why Kerry named it “Arabesque”.

It’s interesting, the little mandelbrot man in the center almost looks like a key hole on some elaborately made jewel box or cabinet. And the darker gold background has a very realistic looking enamelled appearance.

From the notes for the image:

This image was created with a formula that combines the Mandelbrot and Newton fractals. The 3D effect comes from a coloring technique that mimics the look of embossed paper.

The embossing effect I think is what gives the fractal pattern such a stunning display. I’ve seen this effect used with other fractal images elsewhere and it’s not always done this tastefully; here it’s just enough to bring out the pattern and raise it up from the background and not create a high contrast moonscape (although that can be fun sometimes, too).

There’s a funny story about how I stumbled on this image. It was back in June of 2007, or something, when I was working out my personal thoughts on Ultra Fractal and trying to see as many examples of UF work as possible. Naturally, I started with the official, UF site.

I was looking for examples of excessive layering and smudgy, syrupy sorts of things. I was quite surprised when I came across this. Although I’m sure it’s not an overly simple image, it’s complexity accentuates the simple beauty of the fractal formula. In fact, I suppose this image could be displayed just as easily in a math textbook as it could in an art gallery. Far out, eh?

Stay tuned next week folks, for another exciting episode of Orbit Trap’s featured artwork selection. The image could be yours, it could be your neighbor’s, it could be from someone you’ve never heard of! It will, however, be noteworthy.

3 thoughts on “Kudos to Kerry”