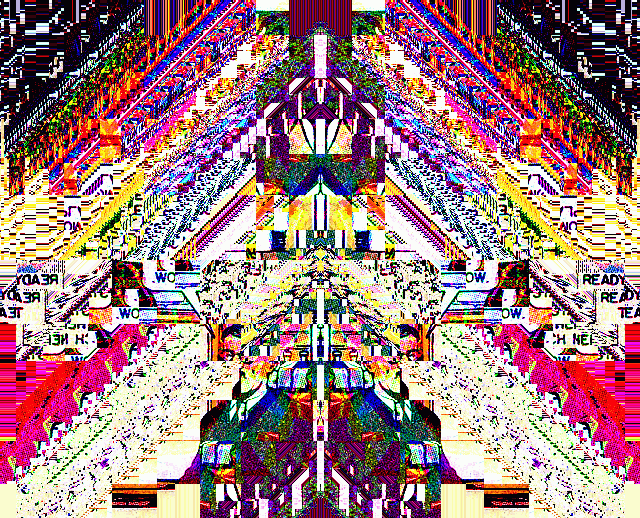 I don’t need to explain why I’m enthused about fractal programs, I hope.  But I probably do need to do a lot of explaining to convince people that today’s fractal art is disappointing.  That’s because I don’t think most fractal art “enthusiasts” today are at all disappointed with the sort of thing that’s being posted online by the current crop of fractal artists.

But I am.  And I think I’ve found the reason why.  Although it might not really be a matter of age, just a matter of artistic preference, I suspect it has a lot to do with the fact that my initial introduction to computer things was at a time when computers were largely primitive machines.

Today’s computer graphics are rich, full-color and very sophisticated.  I don’t really think of that as being computer-ish, or my idea of computer-ish.  In fact, I think of such kinds of imagery as being more natural and photographic.

Photo realism is the exact opposite of what I associate and enjoy about computer made graphics.  That sort of thing lacks the mechanical qualities that I associate with computers.  What I think of as the computer style is primitive, crude and inhuman.

It’s that non-human, machine-world look that I like and which I suspect few are trying to obtain or really care for these days in the fractal art realm.  In keeping with that style is imagery that mimics the characteristics of (poorly) printed images and its associated mechanical style and roughness.  Again, that’s an offshoot of old technology, specifically the (primitive) printing press.

The more natural, organic and (wince) life-like that fractal art gets, the more disinterested and apathetic I get about it.  To me what makes computer art (digital art) interesting is its alien, other-world and unnatural style.  The more it resembles what people can make with paint brushes or photographic equipment the more it just looks to me like painting and photography.

I’m all wrong about this, of course.  That is, my idea of computer art is not where it’s at these days and maybe never will be.  On the other hand I’ve never felt that the popular attitudes and tastes in fractal art have ever really reflected an artistic sensibility but rather merely an unthinking, reflexive response to imitate the slick commercial style most commonly seen in advertising –the cathedrals of our time.  The fractal “art” world reflects an adoration of commercial art which has normally in art circles been the source material for satire, ridicule and hostility.  To see an art form bowing the knee to crass commercialism (that is, without making any money at it) suggests to me that art is not what they’re after or what they’re about.

Most fractal artists do this, I believe, unwittingly.  It’s the instinctive approach of a beginner to making art.  It’s the fool’s gold of art: copying and imitation instead of the real thing which is found in creativity and scratching one’s unique artistic itch.  Everyone starts off that way.

I remember well a comment (not exactly verbatim) from Roy Lichtenstein, the guy who made big paintings that looked like panels from comic books back in the 60s.  He said  he began experimenting with comic book “paintings” because everything else he saw being done at that time in the art world was  boring.

I think that’s the most exciting aspect of the fractal art world today.