Search results for "fractal art" from the official ICM website

Interesting search results for “fractal art”.  Maybe they don’t call it “art?”  Well, alright.  Some people might not see fractals as real art but how about just “fractals”?  That’s got to come up with something about the exhibit.  As they say on Google, “I feel lucky!”

Search results for "fractal" from the ICM 2010 official website

No way!  Stop me if I’m wrong, but isn’t fractal geometry something that even high school math students study?  And yet there doesn’t even seem to be anything about fractal math at the ICM 2010.  I thought at least some of these folks were fractal math gurus and something, somewhere fractal related would come up.  But apparently this ICM has no connection with fractal math much less fractal art.

Okay, maybe I’ve got to look at this ICM conference not from my own perspective but from the point of view of a ICM attendee, an esteemed mathematician, university scholar who’s traveled thousands of miles just to be part of the International Congress of Mathematicians:

But seriously, I’m getting the idea that the Benoit Mandelbrot Fractal Art Contest exhibition was a one-time thing.  The very first year, 2006, it was sponsored by the ICM because that year they were giving a special award to Benoit Mandelbrot, whom as we all know is considered the father of fractal geometry.  They had a fractal art exhibition to complement the special award being given out at that time.  The ICMs are held every four years and the next one wouldn’t have been until 2010.  The 2007 BMFAC naturally was not associated with the ICM because there wasn’t one that year.  It was sponsored by Vodafone but held in the same city, Madrid, Spain, as the first (ICM sponsored) exhibition.

There was no BMFAC in 2008 (no reason given) but they did hold a contest in 2009 which was intended to form the exhibition at the next ICM exhibition, that being 2010 in Hyderabad, India.  The contest seemed to be held much farther in advance of the ICM than the contest for the last ICM in 2006 was; the contest judging was over and the results announced in late 2009, almost a year ahead of the ICM.

But then it was discovered (yes, no mention of this by the BMFAC organizers) that there were three “extra” public exhibitions held before the ICM exhibition in Aug. 2010, suggesting that the early contest date had been planned well in advance, that is, intentionally,  to accommodate these three —unannounced– exhibitions.

All of these things characterized the organizers of the BMFACs as a very closed and secretive group:

The organizers know all these questions are out there, but they choose to say nothing about it.  Why?  Why all the silence among people who say they’re trying to publicize and promote fractal art?  Is it just their little project and what happens is nobody else’s business?

My theory is that the organizers of the ICM 2010 in Hyderabad never wanted a fractal art exhibition and refused to include it with the other cultural events that they’d planned for the congress.  That’s why you won’t find any mention of it on the official website:  “Sorry, you’re looking for something –we don’t want here.” 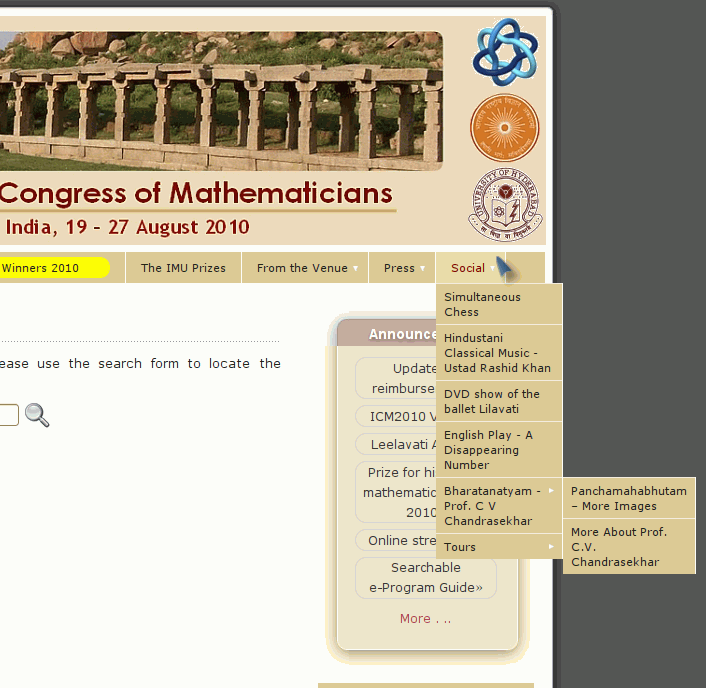 I doubt we’re ever going to know what went wrong with the BMFAC 2010 exhibition because I know from past years that the organizers feel they’re above reproach and can do whatever they like.  They’ve always been that way.  From the very beginning this contest was all about the organizers and the judges and not about “presenting fractal art to a world that largely doesn’t know it”.  That was a facade to hide the promotion of their own works and reputations.  They needed the fractal art community’s participation to make it look like a legitimate art contest to the sponsors and anyone else with a critical eye.  Then they stuck their own artwork into the exhibition, bypassing all of the selection committee and presented it alongside the contest winners as if it had the same juried and “chosen” status.  They did it for the first two exhibitions.  They didn’t do it for this one.

Is that why they weren’t so concerned about promoting “fractal art” this time?

2 thoughts on “BMFAC: Sorry, you’re looking for something that isn’t here”