We recently received an inquiry here at Orbit Trap; an email requesting where the Fractal Universe calendar featuring the work of Cornelia Yoder could be bought.

But I Googled the title, found it on Amazon.com and sent off a reply anyway.  Strange, I thought, but many people find hunting for things on the internet to be a challenge, and add to that the Christmas shopping season, and many of us are busy, so I just shrugged it off.

…And decided to take a second look at fractal calendars.

There’s more than one calendar out there using the title “Fractal Universe” so here’s the one made by Cornelia Yoder: 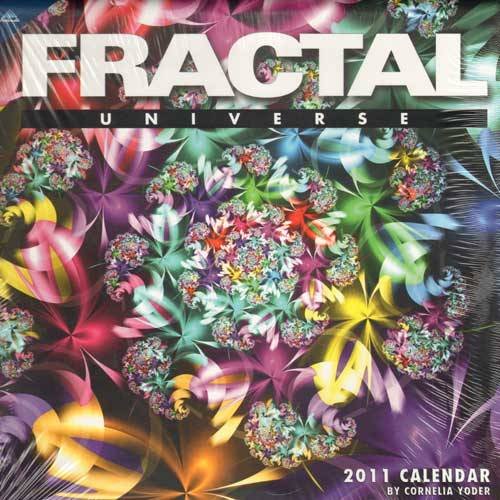 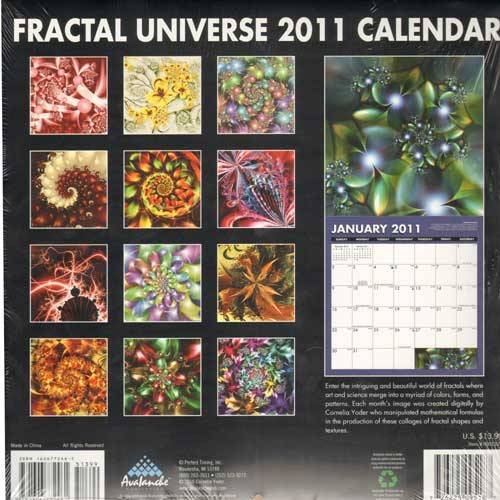 Backside of Fractal Universe calendar by Cornelia Yoder from Amazon.com

You can see clearly on the back the Avalanche logo and on the front “by Cornelia Yoder”.  Cornelia previously referred to Perfect Timing Inc. as the company behind this calendar and that’s probably because Perfect Timing owns Avalanche Publishing now.  She also mentioned she had a two-year deal with them to produce the artwork for the calendar.

I’d say Cornelia has done an excellent job maintaining that Fractal Universe style we’ve all come to know.  This could in fact be considered a “Tribute” album for the old Fractal Universe days.  Let’s change the subject…

Well, what would you say if back issues of your wall calendar were selling for almost $1,500.00.  And that’s used copies!

I have a screenshot in case you think I’m making this up: 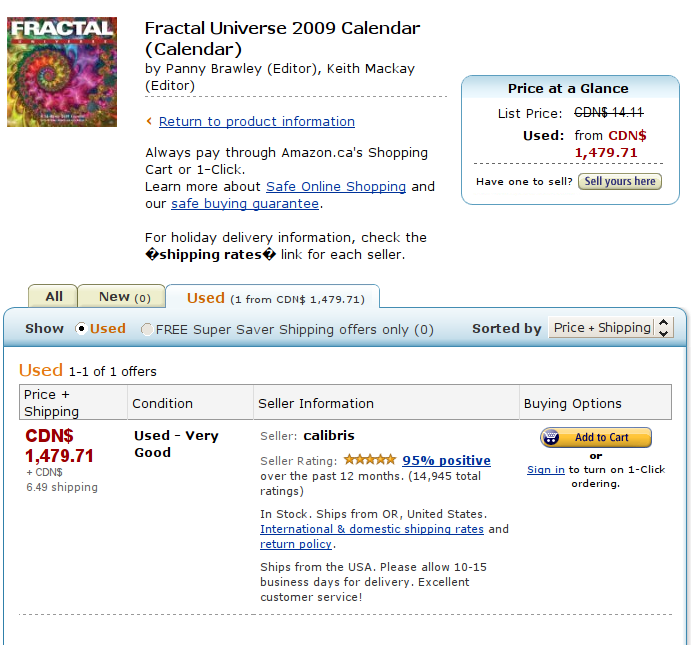 From Amazon.ca (Canadian site) Click to see if it's still there

(Notice that you still have to pay $6.49 for shipping) 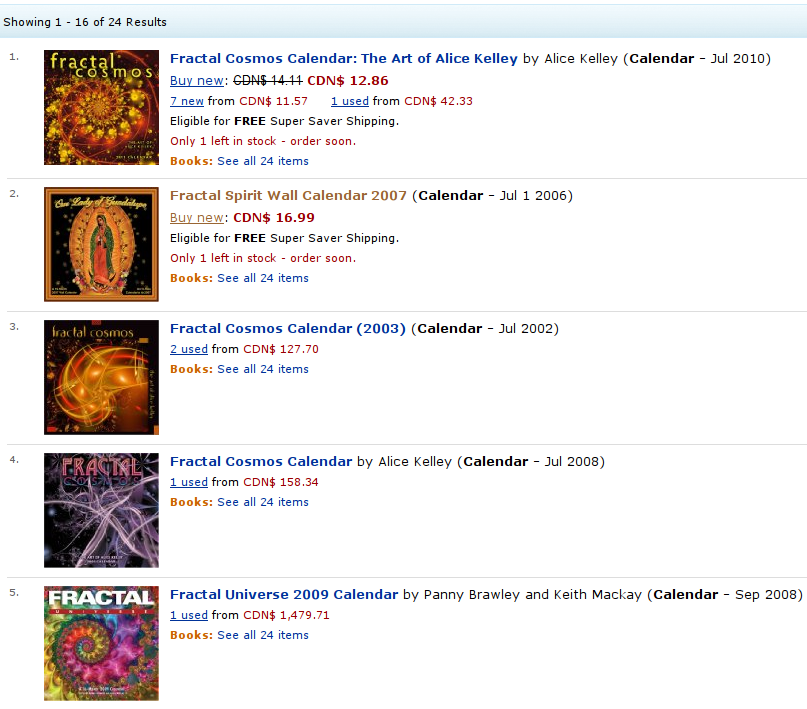 I am not a Lawyer and I am not an Investment Counselor, but if the tingling sensation in my funny bone means anything I’d say we all ought to go out there and buy up every copy of the 2011 Fractal Universe calendar we can because next year, or the next, they might be worth hundreds, if not thousands of dollars!

The stock on the left is worth more, but you'll be able to buy twice as many shares if you buy the cheaper one on the right 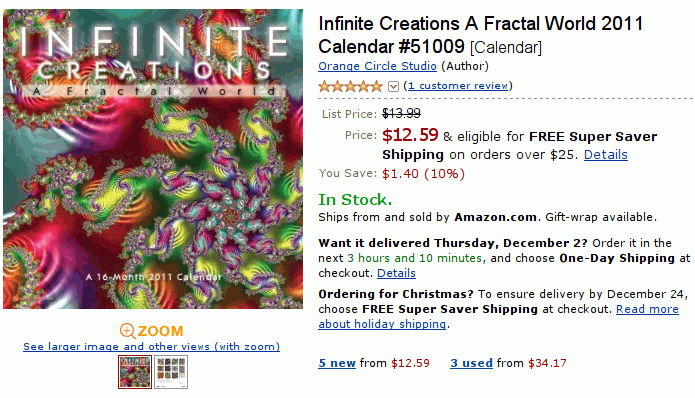 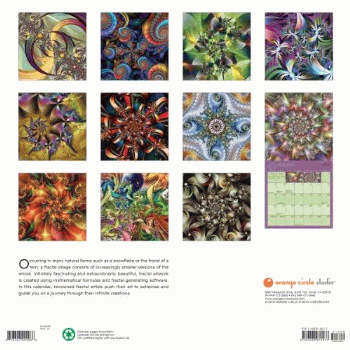 Backside of Infinite Creations, a fractal calendar by Orange Circle

How come no one told me about this one?

By any chance did you catch the odd thing my search results screen from Amazon.ca brought up when searching for Fractal Calendars?  I’m referring to the “Fractal Spirit Wall Calendar” whose title doesn’t mention “fractal” at all and instead says, “Our Lady of Guadalupe”. 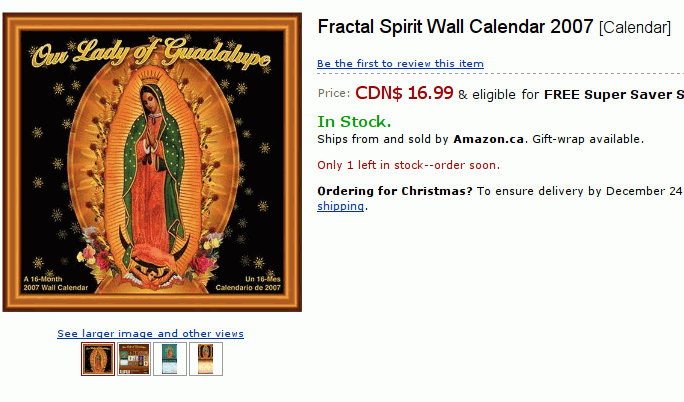 Here’s a few images that might help you spot the apparent fractal connection: 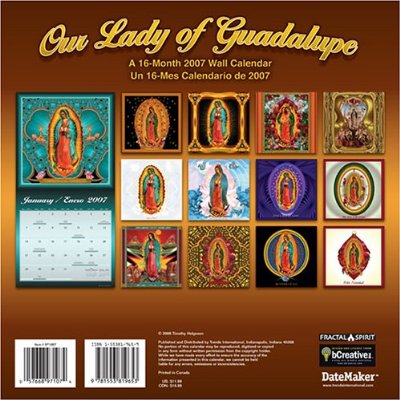 An interesting use of fractals: religious ornamentation.  What’s even more interesting is that there has been no attempt on the packaging (i.e. front cover) to market it as fractal or even as a special kind of graphical calendar; it’s just several ornamented versions of the Mexican madonna.  The front cover art doesn’t appear to have any fractal ornamentation at all.

Oh.  I just looked at the back cover again and saw the name “Fractal Spirit”.  I guess that’s the company that produced the artwork.  Here’s a slightly larger version of the front cover.

More Googling… I found this gallery of Our Lady of Guadalupe images which appear to be the ones from the calendar.  That would make “Fractal Spirit” Timothy Helgeson from northern California, USA.

Step into the Cosmic

There’s still one of the “pro-calendars” left to talk about and that’s the venerable (since 2000!) Fractal Cosmos published by Amber Lotus and featuring the art of Alice Kelley (not to be confused with Linda Allison).

I’m sorry to say this, but there’s absolutely nothing weird or scandalous about Alice’s Fractal Cosmos calendar, although you will see in the Amazon.ca search screen up the page that a 2009 edition is selling for $158.34 in that Bermuda Triangle of used calendars (maybe Alice autographed that one?).

There’s a wider range of imagery in Fractal Cosmos and even more than one piece of software was used.  I think I saw an Incendia image in there.  For those who hold that commercial, wall calendar fractal art has to follow the Fractal Universe kitchen-ware style, Fractal Cosmos is a real challenge to explain.  Or perhaps it isn’t?  Amber Lotus, if you take a look around their site, is clearly not the same sort of outfit as Avalanche publishing is.  I found this on their About Us page:

Amber Lotus Publishing was founded in 1988 by students of a Tibetan Lama living in exile in Berkeley California.

For those of you who prefer to make your own gifts, I would like to remind you that although the titles Fractal Universe and Fractal Cosmos have been taken, Fractal Galaxy is still up for grabs.  In fact, Fractal Galaxy is feeling lonely and ignored, having been passed over by Avalanche Team A and Avalanche Team B and the unofficial Avalanche Team C who have set their sights much lower and decided to simply become “A fractal world” albeit one of “Infinite” creativity.

But since there’s already two Fractal Universes out there (parallel universes?) maybe we can all use that title, too.  Or at least a few more times.  Just don’t copy the dixie-cup style.  Fractal wall calendars can be creative and still be commercially successful.  A handful of harmonious humans in Oregon have been proving that since the year 2000.