Add the following two links to your bookmarks/favorites and visit them every day and you will stay up to date with 80% of all that’s interesting in the fractal art world today.  Recent Uploads to the gallery and Recent Posts to the forum at Fractalforums.com:

One of my favorite posting themes here on Orbit Trap is directing the attention of readers to what I think is the more interesting and more significant fractal art works out there on the internet  –a fractal art “digest”.

My main criticism of fractal art contests is that they seem to do very little in the way of presenting what is really the best of fractal art.  Contests are:

What the fractal art world needs, or what every other area of interest in the world needs for that matter, are a few critical venues unconstrained by the characteristics of contests that I’ve just mentioned and which in my mind condemns them to be trivial, over-hyped events .

Blogs are a good way to do this, but since early 2010 most of what I consider to be the more interesting fractal artwork has been gleaned from just following those two links on Fractalforums.com.  It’s gotten to the point that I sometimes feel readers would be better off just keeping an eye on those two pages of updates to Fractalforums; that’s all I’ve been doing lately.  The more interesting stuff is easier to find now and that’s all due to the crystallizing effect that Fractalforums.com has had in this new area of 3D fractals.

I mention all this because I’ve found that this year, unlike all of the previous years I’ve been observing fractal art online (since 2002), there is just too much good artwork around to deal with.  I have about 200 links to good stuff that I’m just never going to get around to posting about along with keeping up with the daily increasing output resulting from more practitioners moving into the realm of 3D mandelbulb/mandelbox fractals.  When I see something really interesting I just have this natural urge to talk about it and generally share it with a few other like-minded true enthusiasts but there’s just too much of it.

But you can find most of it via those two links.  Not only that, but both those pages have rss/atom feeds which practically makes them websites or blogs on their own. 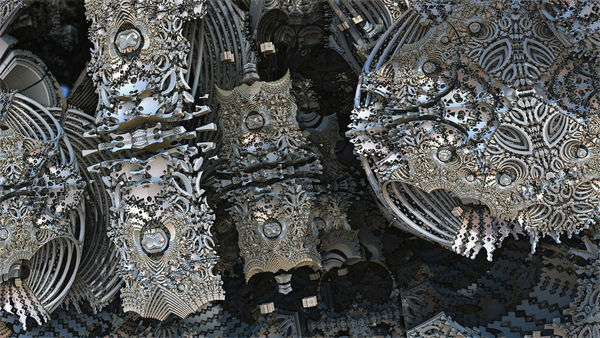 Zongo is his FFs screen name.  His real name, according to his Deviant Art page is Alexandre Lehmann (France).  He makes this comment about the image:

You HAVE to see this in full definition !

He’s right; in full definition it’s even more vivid and the lighting is much more impressive, too.  Nicely rendered; I’ll bet it took some time to produce something this large and smoothly finished.

This is not just another amazing mandelbox, although technically it may be; I’ve never seen these sorts of shapes and polished silver rendering before. 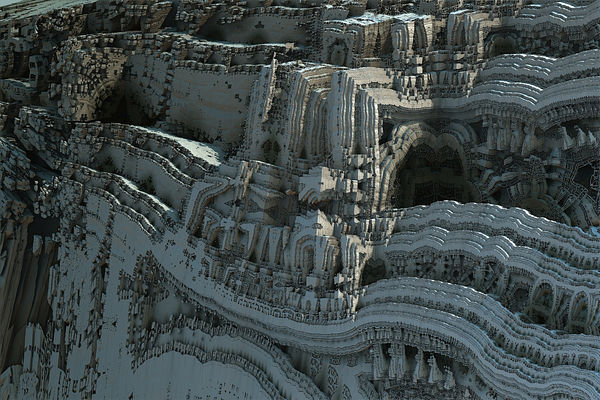 Lately there’s been something called a “hybrid” mandelbox which seems to incorporate new formulaic structures and producing images, like this one, that have so much variety in their details that it’s hard to believe anything as mechanical as a fractal formula created them.

The  title immediately made me think of Montezuma’s Castle, a cliff dwelling in Arizona: 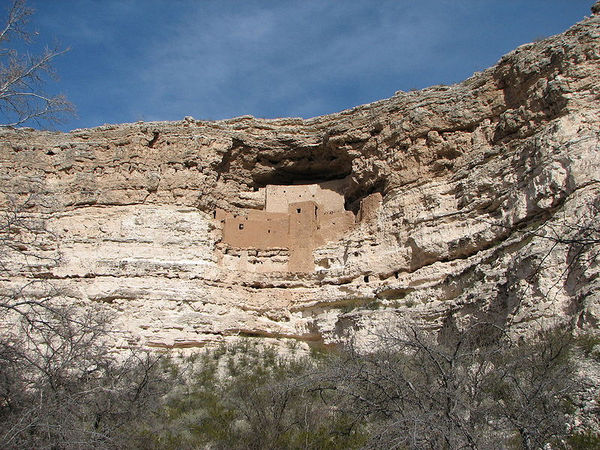 Interestingly, Madman himself started a very thought-provoking thread on Fractalforums entitled, “Is there a limit in exploring 3D fractals? “.  In it he asks the question:

To avoid the possibility of misquoting him…

Rereading my post, I guess you could interpret it as a (rather pathetic ;-)) call for help, but that’s not what I intended. So let me try to rephrase and see if I can synchronise my writing with my thinking

. I guess that from a mathematical point of view, there’s no end to the variety you can achieve by zooming more into either mandelbrots, -bulbs or -boxes, but if you look from a more artistical view I tend to find that at a certain point you get to a level where “the more things change, the more they stay the same”. Am I making sense here?

Let me put it another way: If you google “fractal art”, you ‘ll find that 95% of the hits show spirally thingies. Some of them are quite beautiful and have probably taken hours to render, but you know that with a little work, you can make something close to it yourself or at least something with the same “feel”.

So let me rephrase my question: Do you think that there will be a time when every new picture will look like one that has been rendered previously or at least has the same “feel” as something rendered previously? Something that you will immediately recognise as, say, a scale -1.34 Mandelbox, rotated x,y and z degrees, scaled and then sphere folded? Something that can no longer surprise you?

Hmmn… Isn’t that the ultimate question in fractal art?  I would reword it as, “Don’t fractals eventually become just fractals?” and, “How do you produce new and interesting work from a medium that has ceased to be new and interesting?  Madman’s responders naturally assume he’s run out of technical options and provide him with many more and also with the observation that there are even more than that yet to be discovered as folks explore all the remaining combinations and permutations of 3D fractal formulas and rendering methods.

But what I think Madman is getting at is that he feels close to running out of creative options, of which more formulas and rendering methods will only delay the inevitable creative collapse and infinite entropy “when every new picture will look like one that has been rendered previously or at least has the same ‘feel’ “

How to stay creative?

Here’s one of my many links I thought I’d never get a chance to post.  I think it fits in very well with the question of pursuing creativity within a well-trodden and heavily picked-over medium. 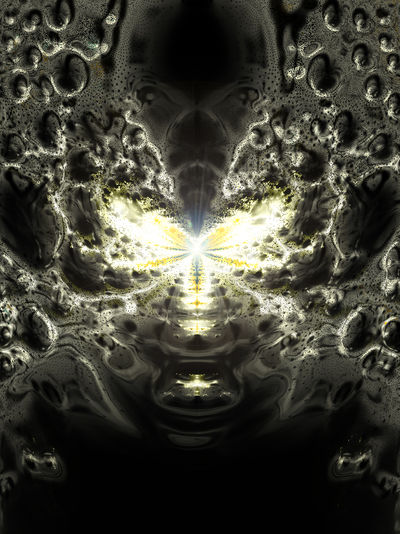 Dragonfly by The Rev (on Fractalforums)

What could be a more uninspiring subject than a Newton fractal?  (I think that’s what it is.)  And yet, I have never seen a Newton like this.  This looks like a hand-drawn image from one of those very classy full color graphic novels, those thinking-man’s comic books.

The Rev is clearly thinking outside the box, that is, the creative box.  Technically, he’s working with what would be considered ancient artifacts in the fractal world.  But I think the Rev has grasped the fact that fractal art is more than just fractals –it’s art.  And art is what you see, meaning, an image.  There are technical parameters to be be explored in fractal art and there are artistic parameters to be explored.  Fractal art is the combination of these two visual forces. 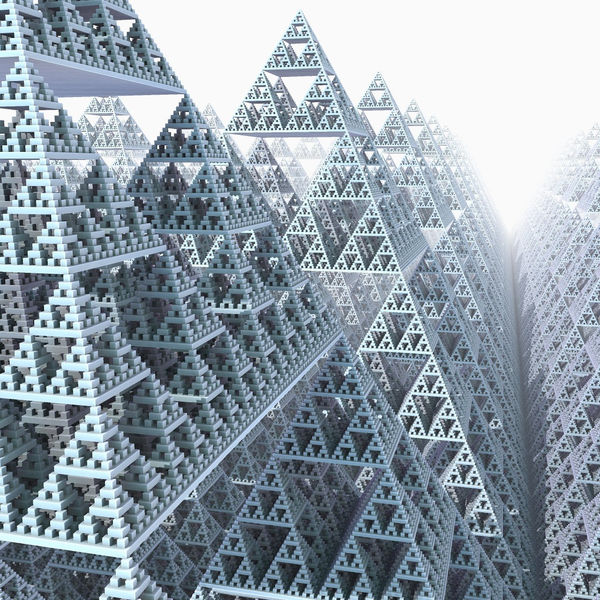 Sierpinski's Planet by Buddhi (on Fractalforums.com)

Sierpinski pyramids made of bricks?  What could be more technically uninteresting than a Sierpinski-anything?  And yet, I’ve come back to this one so many times just to:

I think the advent of 3D fractals has marked the beginning of a new era in fractal art and Fractalforums.com is the place where it all started –and continues to start.  It’s the place to watch and read for the true enthusiast.

Deviant Art is just an image hosting service now and  I have no idea what happened to that Rendercity place.  The contests come out once a year to look at their shadow…  Most of the traffic on the web rings is just members checking their stats cause they thought they heard someone at the door this morning… the Googlebot is the only thing that drives down the road these days… Spirally thingies turn in the wind… looks like weather’s on the way… winter’s comin’…

One thought on “Readme: Attention True Enthusiasts of Fractal Art…”