I have a few rules of thumb I like to keep to when it comes to reviewing fractal art.  One of them, if it were boiled down and expressed as a revolutionary slogan painted on a flag, is “Art, not Artists”.  It’s not a hard rule to follow in the fractal art world where the work of most artists is eclectic by nature and varies quite widely.  Expressed another way: There are no good artists, only good art.

I go looking for good artwork and the name of the artist is just part of the frame.  Lately the art trail keeps leading back to Johan Ason’s Mandelwerk Castle, his Deviant Art gallery.  I think there is such a thing as a talent for working with fractal software and other algorithmic machines to make artwork.  It’s like a talent for taking photographs.  It’s different than a talent for painting or sketching but, like all visual art, the final result is something you look at.  The process is different and as such it favors a different skill set and a different talent that directs it.  So maybe there is a such a thing as a good fractal artist.

Johan (aka Kraftwerk on Fractalforums.com) seems to have that talent for fractal software.  And there’s a few others.  Let’s take a look. 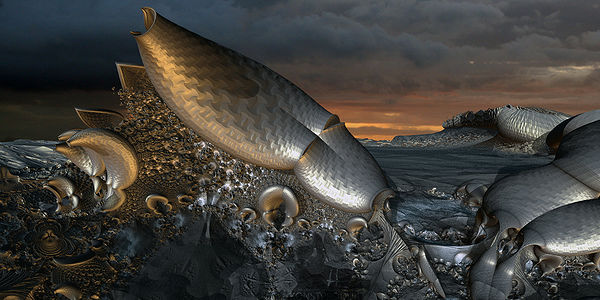 Most of the time, natural imagery like sunsets and clouds clash with computer generated fractal imagery.  For that reason alone, Johan deserves an special award for this one: the natural sky and the fractal landscape fit together perfectly.  And as a salute to the recent passing of Dr. Mandelbrot it’s even more appropriate:  I can’t think of a more realistic, while at the same time fantastic, rendering of what an alien planet might look like; a world created by fractal geometry.

Someone on Fractalforums.com commented on the excellent composition of the image also.  The eye is naturally and effortlessly guided through the image first from the structure in the left foreground, across that barren stretch in the middle to the distant hill and finally to that fading sunset.  Painters can make these sorts of compositions happen deliberately, but photographers and fractal artists have to hunt them down and capture them in the wild.  (With a little help sometimes from a graphics program.)

You really need to click on this one to see the great detail in the full-size image.  The “tree trunks” themselves have some strange secrets to tell and the glowing glass canopy of “leaves” is even more spectacular in the larger version.  Cathedral and Woods makes for a good title and I like the mysterious sound of the 13th Secret.

Do you see the strange face lurking beside the tree trunk in the right corner?  That’s not an evil troll waiting to skin you alive in a full moon ritual, that’s the artist.  I’ve seen artists try to get creative with their signature/watermarks but none have looked as good as this. 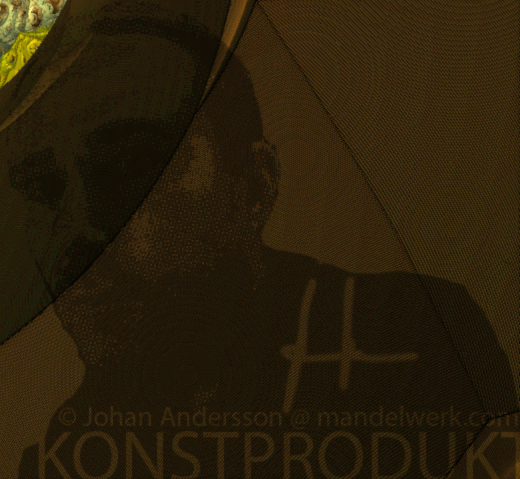 Well, drown my kittens!  It’s Andersson, not Ason.  I noticed that his first name didn’t seem to be spelled right on his Deviant Art page, so maybe I should have been more careful.  Don’t believe everything you read on the internet or just guess at stuff you’re not sure about.

That’s his picture (I’m guessing); the squiggle on his shoulder is his actual autograph; there’s an email address and a nifty, euro-company name: KONSTPRODUKT.  All that in a single color image; that’s better identification than a passport.  Very classy.  Apparently konstprodukt is Swedish for artifact.  I think I’m getting close to unraveling the next secret of the Cathedral Woods.

Anyhow, Johan has constructed a very creative as well as effective signature for his work.  The email address is a great idea.  Assuming that shadowy figure hasn’t scared you off. 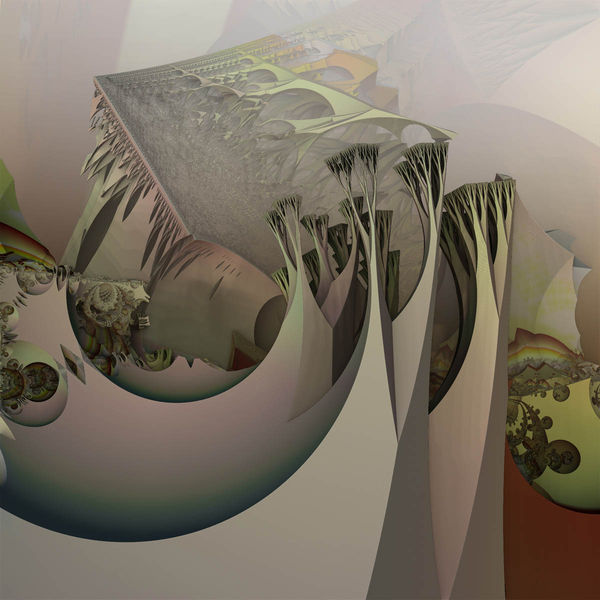 Seventh Secret of the Forest by Johan Andersson (Mandelwerk)

Johan writes: “Inspired by Jesses http://www.fractalforums.com/index.php?action=gallery;sa=view;id=3447 and Rrrolas images of negative scaled boxes I went ahead and found a surreal forest…”

I would never have thought such an image could come from the mandelbox, but then, it hasn’t even been around for a whole year yet, so maybe there’s lots more to be done with it.  A very different style of image from the usual 3D fractal graphics.  It would make a great Yes album cover. 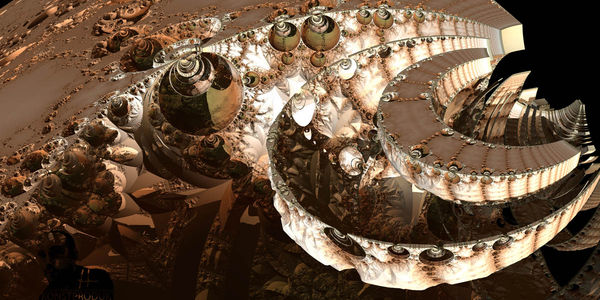 Dark Secret of the Moon by Johan Andersson (Kraftwerk/Mandelwerk)

Apart from the awesome panorama in the top left of the image and the shining cliff face that forms part of it, what I find equally interesting is what’s going on in the right hand side.  The incredibly lifelike and very graphic imagery on the left slowly changes to very plain, geometric and much more abstract imagery on the right.  It’s almost like a diagram or chart showing a range of something.  I find it gives the image a very surreal quality because the two very different sorts of imagery are connected and flow from one to the other.  It’s a sort of dissolving reality; a face slowly morphing into a landscape or a landscape gradually melting into a geometric shape.  It reminds me of one of those many Salvador Dali abstracted sequences. 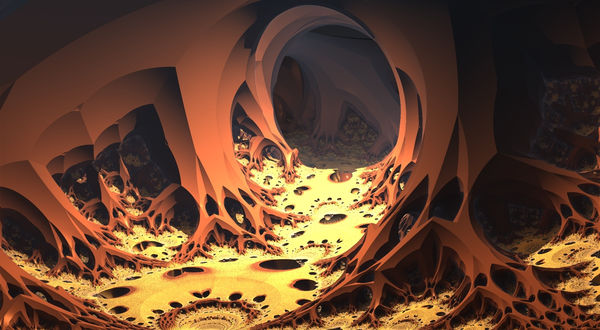 Under Desert by Jesse

This is the image referred to by Johan previously.  As he said, it’s a variation using a negative scale parameter setting.  The results, as you can see, are these elegant, almost vector graphic images.  The title is a very good one; a desert cave or tunnel with some glowing light source.  Again, such a different style from the gritty, weathered stone surfaces that most mandelbox images have.  It sure pays to explore the whole range of parameter settings.  When you set off to boldly explore the mandelbox formula, this is the sort of treasure and new worlds you may find. 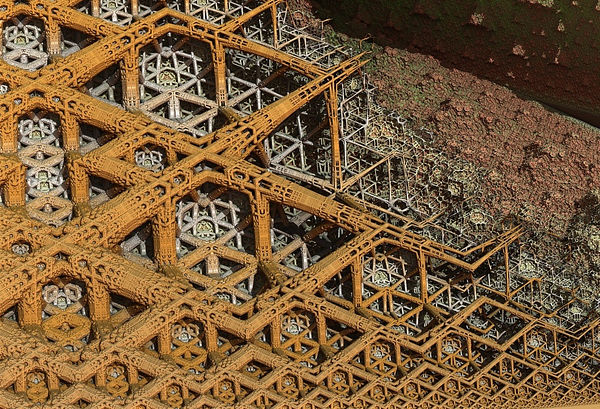 This one is absolutely incredible, isn’t it? not just because of the innovative needle like structures but also because of the range of imagery and the incredible intertwining designs.  Note also the interesting recursion of the design we see in detail in the top and left as it iterates into infinity in the bottom and right.  The color is perfect; from the gold/orange of the cathedral like spires to the fish bone needles in the mid-ground to the red/green clay surface that lays exposed in the top right.  Jesse deserves not just an award for this image but for creating the program that made it.  He’s a real multi-talented individual. 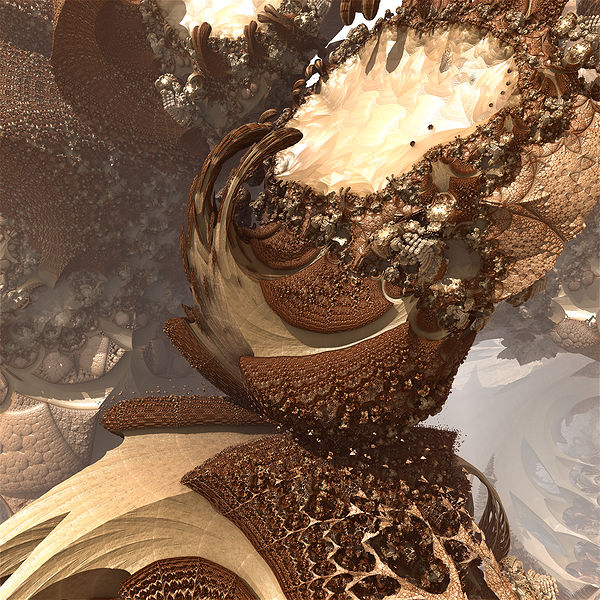 The full size is worth the click.  I found this one via Johan’s list of Favs on Deviant Art.  I see an alpine scene; something up in the mountains but grass covered.  That smooth golden patch in the upper right is a (fractal) alpine meadow.  And from that meadow you can see the distant tops of other mountains, but, just kind of twisted and spun around.  I can’t explain the smooth cave structures in the bottom right, but sometimes dreams get mixed into the formula.  Click on them, and they’re gone… 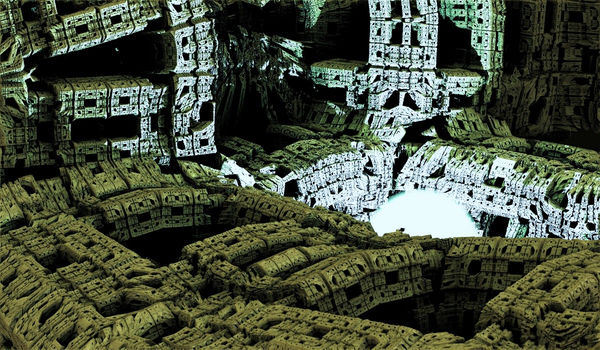 What the tomb saw, before the archaeologist entered.  Is that a mandel-light-bulb glowing and emerging from the crypt?  Perhaps this is what light sources look like up close in the mandelbox programs?  Anyhow, I like the Egyptian tomb look to this: the ornately carved wood furniture and the decorated walls.  It’s both ancient and decayed while at the same time elegant and well, emergent.  Something is coming out and it doesn’t look any worse for wear after a few thousand years of lying entombed in silence.  There looks to be two other burial things there in the foreground.  Empty?  Or robbed?  It’s a mistake that the emerging thing has allowed you to see this much and live.  Be thankful for that oversight and start running. 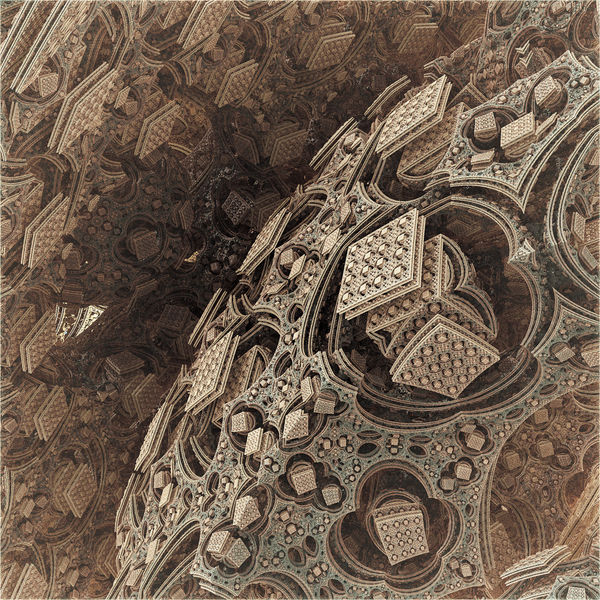 Jotero?  A new face on Fractalforums.com.  And he’s got his own unique style too.  Who else makes 3D fractals that look like this?  The coloring here is special.  It creates an electron micrograph look.  That’s a photograph taken through an electron microscope.  If you had really good eyes and they worked with electrons instead of photons, this is what you’d see when you looked at a mandelbox.  From the title I’m assuming he used the Mandelbulber program by buddhi (Krzysztof Marczak), a free program for Windows as well as Linux.  (Not to be confused with the Mandelbulb 3D by Jesse.) 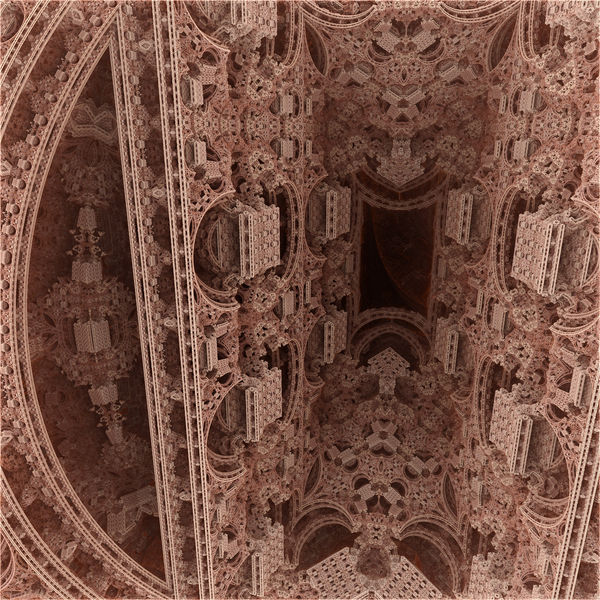 Magnificent detail.  This is a royal mandel-palace.  And it’s virtually monochromatic and yet looks great.  The single color tone probably heightens the visual impression that all those intricate details make.  Very subtle lighting and shading makes for a very vivid 3D image just like a scanning electron microscope does.  The best fractal images are discovered, not constructed, in my opinion.  I’m sure we’ll be seeing some more great work by “Jotero”.  (Some connection with this site and this one, too.)

I’ve got more.  Lots more.  My fractal fishing net is still full.  There’s just so much good stuff out there since the Mandelbulb and all the rest of the 3D fractals crashed onto the scene.  So I thought I’d make a start by emptying out my net here; starting with Prince Johan …and a few others.

3 thoughts on “Prince Johan …and a few others”