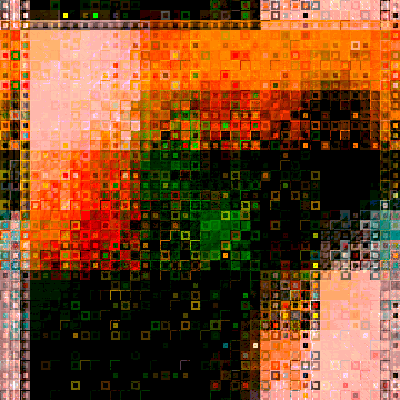 When Robert Oppenheimer witnessed the first nuclear explosion, a project which he personally managed, he apparently said, “I am become Death, the destoyer of worlds”.

When I first tried out this photoshop filter, I said, along the same lines, “I am become Klimt”. I didn’t say it out loud, just like Oppenheimer, I suppose, didn’t declare out loud that he’d become Death. 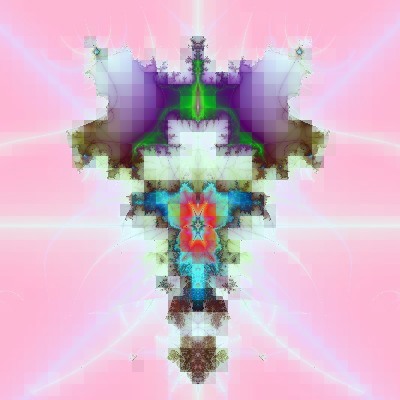 A mosiac filter is part of almost every graphics program. Sometimes it’s called “pixilate” or something like that, since a mosaic is essentially the rendering of an image in larger, simpler pieces (ie. lower resolution) resembling pixel blocks.

It’s probably an easy thing to program, like blur or sharpen. But this particular mosaic creates a variety of effects derived from that simple idea of the mosaic. Instead of just a square, you can have a box with a little square inside. The box and the square are different colors, based on the underlying image and some simple complementary or other color wheel relationship. The mosaic square can also be circle or ball (solid circle) or gear or flower. They save very well as indexed pngs since they’re already indexed to a certain extent, as long as you don’t include a gradient effect. 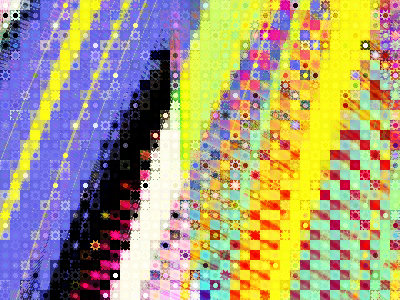 Layering too. Or blending, they call it. This creates some very interesting effects because you can make a “semi” mosaic image by overlaying the effect by degrees. Some look like squares of transparent tape stuck to the image. I like to use Square Rings or Gears, Cell pixel size= 10, Blend= 130 (half way), Normal/Overlay/Multiply/or Expose, and no gradient things. 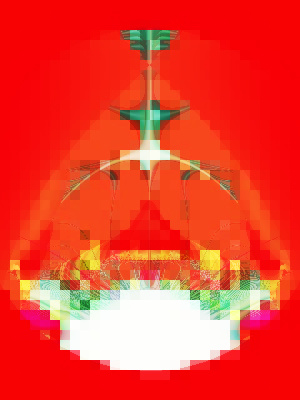 It’s called, the Mosaic Toolkit made by Lance Otis, and is free. It ought to be called, Klimt in a Can. The webpage has a sample mosaic of George Washington, which can be viewed from 30 feet away for an interesting digital parlour trick. I have to admit, that image caught my eye and I might not have downloaded the filter if I hadn’t seen that because there’s a lot of free photoshop filters around and most of them are not too exciting. Some parts of our minds are pretty simple.

Mosaic Toolkit is in the “creative” category, meaning it “makes” things, and you don’t really know what the image is going to look like until you try it. Although the results from “creative” filters can be disappointing when used with “good” starter images, they can also be very exciting and produce something great from a “plain” starter image. I think the most important characteristic of a starter image is its color scheme, since that’s usually the only trait that will survive the transformational process (unless you use layering/blending).

One thought on “I am become Klimt!”