Yes, the winners of the Benoit Mandelbrot 2009 Fractal Art Contest are now out (and this time it’s final).  I’m skipping the usual clever art critic review for now because there’s something that’s just too outrageous not to comment on right off the bat.  If you’ve seen the 2009 winners page you might have missed it –unless you were able to read between the initials!

First off, Joseph Presley has done a nice job on his winning entry, so don’t get me wrong, there’s nothing about the quality of the work that would exclude it from the winner’s circle at any BMFAC for that reason.  I might even go so far as to say I rather like this one somewhat and that Joe has used his multi-faceted image style very effectively once again.  As many of you will know from reading this blog, I’m not a big fan of the heavy and complicated layering that most Ultra Fractal artists use, but Joe has managed to preserve the image’s interesting fractal structures while doing a lot of surface texturing at the same time.  He’s enhanced the image tastefully, not layered it into some monstrosity.

But giving it the title, “Tribute to Janet Parke”?  That’s too much.  Surely even you dyed in wool BMFAC zealots will have to admit that naming your entry a “Tribute” to one of the judges is going just a little too far?

Oh, yes.  You’re right.  Sorry.  He’s changed the name to a very cryptic and obscure set of initials, “JP”.  Hmmn.. Why, come to think of it, that could even be interpreted as “Tribute to Joseph Presley“!  I guess I must be jumping to conclusions again, or reading sinister motives into innocent mistakes or computer glitches.  Sure.  Except there’s a bit more to this “JP-thing” than what the contest site tells you. 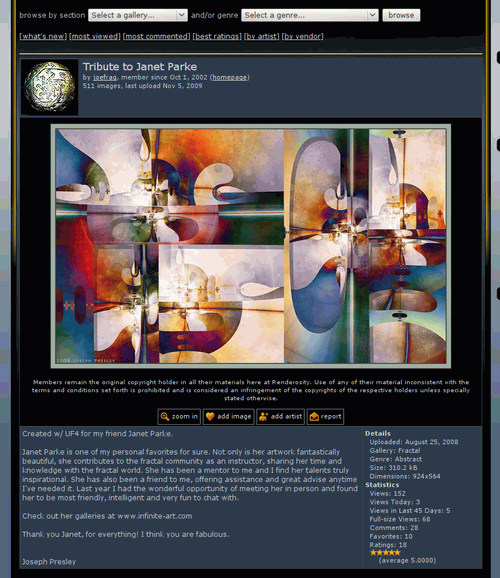 For those of you who lack internet access, I have made this screenshot of a gallery page from Joseph Presley’s Renderosity gallery.  Why a screenshot?  Well, because I know from past reporting on events in the fractal art world that these sorts of pages have a tendency to go offline whenever I comment on them.  It wouldn’t surprise me if this one becomes a similar embarrassment to the BMFAC and gets “adjusted” accordingly.  Here it is, if you want to check it for yourself.

There’s more.  In case you can’t read the fine print, here’s what it says beneath the image:

Janet Parke is one of my personal favorites for sure. Not only is her artwork fantastically beautiful, she contributes to the fractal community as an instructor, sharing her time and knowledge with the fractal world. She has been a mentor to me and I find her talents truly inspirational. She has also been a friend to me, offering assistance and great advise anytime I’ve needed it. Last year I had the wonderful opportunity of meeting her in person and found her to be most friendly, intelligent and very fun to chat with.

Check out her galleries at www.infinite-art.com

Thank you Janet, for everything! I think you are fabulous.

But you know, maybe none of the judges saw this before the judging took place and if they took my advice and concluded that “JP” was the initials for the artist and not the judge, Janet Parke, then everything’s fine and all’s well in the land.  But it’s been up on Renderosity since August 25, 2008.  That’s 2008.  It’s been up for a year and two months.  And there’s two pages of gushing comments hanging down like ancient stalactites from it.

Which brings me to another thing: the rules for the BMFAC 2009 state:

3.6. Existing Works: We would prefer you create new artwork for this contest. Existing works may also be submitted, but we are more likely to select artwork that is new and fresh.

Is this one too old?  It was made after the last BMFAC in 2007, but almost a year before the call for submissions to the 2009 contest was made.  I’m sure other artists have submitted work more than a year old and maybe even won, but this one’s made the rounds at Renderosity and was featured in the special Fractal Window Weekly #200.  Joe’s a well-known fractal artist, so I wouldn’t be surprised if most of the contestants as well as the judges had seen this image before it became an entry to the BMFAC.  Not a big deal, really, but the rules state they want “fresh” stuff, and why would they say that unless they want fresh stuff?

Hey, he gave it a fresh title.  There you go.  And sometimes a title can really change people’s interpretation of fractal art.

One thought on “Have they no shame?”