In keeping with the Phase 2 idea that the essence of fractal art is found in the imagery and not in the tools that made it, I present a mixed bag of things I found while taking the paths less traveled, or never traveled, to find fractal art.  I followed a number of categories during my search on Flickr, mainly the New Abstract Vision Group.  Ironically, I found this a better path to take than the more orthodox and straight forward strategy of simply searching on the word, “Fractal”.  I think they’re all interesting; whether they’re all fractal is a matter of argument and I present them here as food for thought.  None of them would look out of place in any fractal art gallery, that is, with the exception of the tree stump, which at first might be considered a joke, but only once one recognizes that the outer edges of this apparently inverted formula are covered –in bark.

(Click on the images or text links to see larger views and links to similar work by the artists on Flickr.) 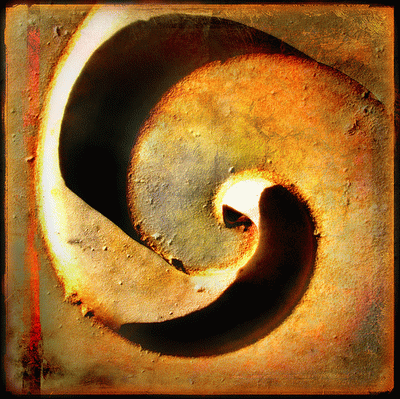 Just a spiral, but how many fractal images can we list that serve no other purpose than to be such simple laboratory specimens upon which experiments in rich, ornate rendering textures and colors are conducted?  It’s all in the surface texture which in places resembles the pitted surface of the moon and in others resembles expensive suede leather.  I’ve always thought that spirals were the still lifes of fractal art and this one’s a fine example. 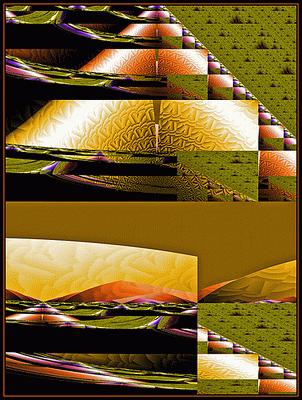 Manas Dichow is a fractal artist I’ve reviewed before.  He uses Ultra Fractal, and I think it was from a comment to this image in his Flickr gallery that I got started on the New Abstract Vision Group’s Flickr gallery.  I found this image to be a good example of the complex juxtaposition found in fragmented images of micro/macro and detail/panorama and if it caught the eye of a member of that Flickr group then I thought I ought to see what else they’ve collected.  Of course, from a fractal perspective this image is just a sierpinski triangle variation with simple coloring and not the sort of thing you’d expect much from.  But Manas, like most good fractal artists, seems to excel at the use of simple formulas to make surprisingly interesting and artistically engaging work.  Very creative. 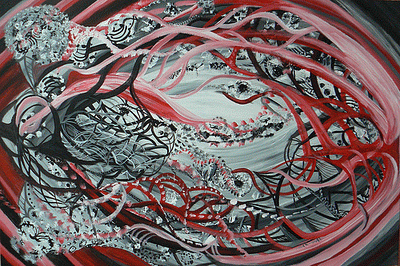 Although it’s really not all that apparent, this image is a painting.  At first I wasn’t sure as I’ve seen a lot of sophisticated rendering that creates paintbrush textures like this.  As far as it’s fractal qualities go, doesn’t it have the proliferating, vegetative look that many fractal programs easily produce?  If I had to guess the rendering, I’d probably say it was a Stalk method.  But it’s a painting and if you’re interested you ought to check out similar ones in jj1236’s gallery. 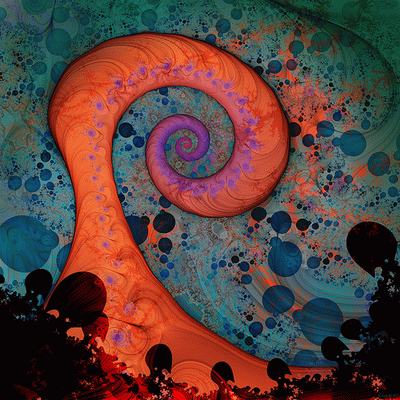 Nice title eh?  I’d go even further in the alliterative exercise on the letter P and point out the Purple.  Another spiral, but what a strangely proportioned one and with such neonic (neon like) coloring.  I think there’s a Party going on down there.  I don’t know why I like this one so much.  I think it’s the Paul Klee-like shape and style to the spiral and also the fact that it’s quite tastefully presented and not over-layered and stuffed full of distracting elements –simple and strong.  Who would dare to make such a simple and bold spiral?  -P- would.  He even made it his avatar.  That’s Perfect! 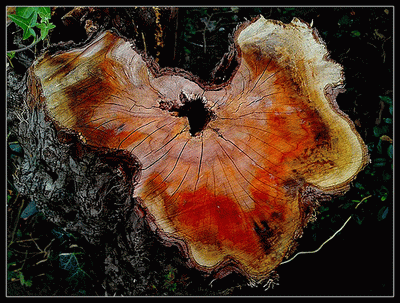 Well, I tipped you off to this one in the intro so you knew it was a tree stump.  The title’s not too subtle, either.  I just find that the shape, the patterns in it, and the je ne sais quoi of fractal art is evident.  Apparently Ian thought it was a work of art too, so there’s another vote.  Does this mean the lumberjack who cut down the tree was a fractal artist?  I can just see the lumberjacks discussing technical matters during a smoke break, “Sven, I’m tired of cutting on the usual plane.  I’d like to experiment with 1/mu today.” 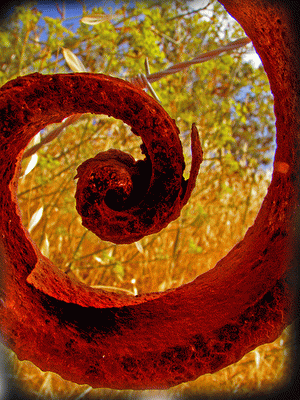 Hmmn… I suspect that Segozyme might have used this same spiral formula up top there in the first image.  This one was either layered in order to incorporate the background, or some filtering took place to produce that orange powdered texture on the iron spiral.  A lot of attention in the fractal world is paid to such details as surface texture and it’s also quite common to compose the background from completely unrelated imagery.  Why not do both?  We often work hard to get a realistic, photographic appearance in digital work.  Why not just import everything?  If you want to end with photo-realism, why not start with photo-realism?  That’s a guaranteed method.  Nice work, Segozyme. 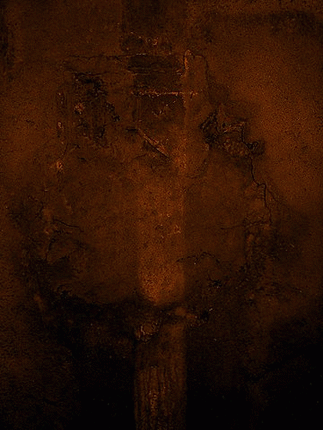 Funny, you’d expect a two-headed mandelbrot to look both ways before crossing the road, but this one didn’t.  If you had to guess how this image was made, what would you say?  I’ve seen fractal art like this.  Actually, this is an even better example.  One of the unofficial jobs of artists is to challenge our comfortable ideas about art by putting a frame around ordinary objects or objects that we would normally disqualify from the category called art.  Only then can we be tricked into seeing the beauty of that foreign object which the artist, being more observant than the average viewer, has already detected.  We often see what we expect to see.  The human mind just works that way.  I think this is a photograph of an old plaster wall.  But that could be a trick. 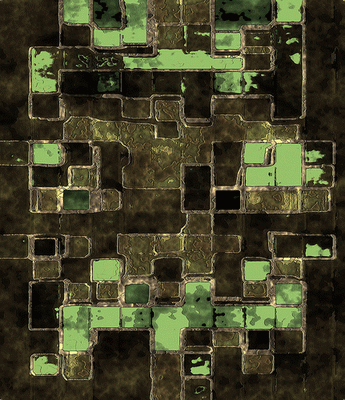 When you suspect everything of being frameless art then you have learned something, I think.  We praise avante garde artists because they have shown us new kinds of art; they have shown us something which was always there, but we just couldn’t see it before because either we’ve never looked in that sort of place before or we didn’t expect it and our eyes just glided over that sort of thing.  When they put a frame around it, it helps us to focus our attention and see in a gallery what they were able to see –in the wild.  I like this one because it’s impossible to tell whether it’s a deliberate creation or something resulting from the accidental and random effect of natural decay.  One’s mind becomes a hung jury wanting to both release the defendant and restore them to a place of dignity and honor, and yet, at the same time to see them capitally punished to such a degree that time itself will be reversed and their evil deed erased from very soil of the Earth.  I’ll let you cast the deciding vote. 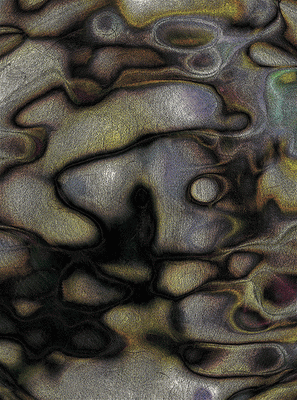 Perhaps you are thinking that I have become a big fan of (my goodness, this artist has a real name!) …of Howard Duncan?  Actually, I just looked at the artwork and bookmarked what l thought was interesting as I surfed the Flickr galleries.  I was quite surprised when I wrote all this up and discovered that three of the ten were by the same artist.  It ought to happen more often, but it doesn’t seem to; I find many fractal artists have one or two interesting works and about a hundred that are, to put it nicely, “in progress”.  Rich surface texturing and a strange flow of —solid— shapes  makes for a dynamic sort of abstract image that changes its shape the more you look at it.  I wonder if that was intentional? 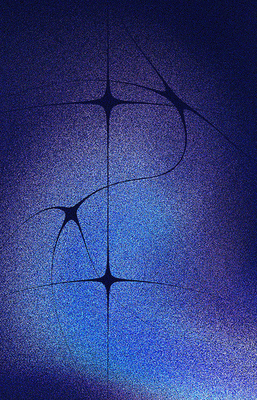 This has got to be a fractal.  That is, the kind made in a fractal program.  I’ve never seen these thread-like intersections in any other kind of imagery.  But, honestly, I’m guessing because as you can see for yourself by clicking the link, there’s no information in Howard’s Flickr gallery to indicate how, or with what, it was made.  Even the image tags only list Digital, abstract, bias and hypothetical.  Hypothetical is an interesting term for fractal art.  This image as anyone can see, is quite simple.  In fact it’s really made up of a tiny and probably minor rendering detail of a much larger fractal image, but shows how one can sometimes be creative with even those sorts of things.  Interestingly, this obviously fractal image is probably the least fractal of all the ones I’ve presented here, in my mind.  One could easily draw such things in a paint program and the grainy background is most likely a simple graphical (noise) effect.  Fractal art is much easier to define and describe when you focus on the finished artwork and not the tools.

Well, I hope you’ve been as challenged by these fractals (“genuine artificial” or otherwise) as I’ve been.  Removing the software bias from the definition of fractal art I think will make the genre both more meaningful as well as more creative.  At the very least, it will force people to look at fractal art more closely.  And that’s always a good thing when it comes to art.

One thought on “Force 10 from Navarone!”