~Click on images to view full-size and on original site~ 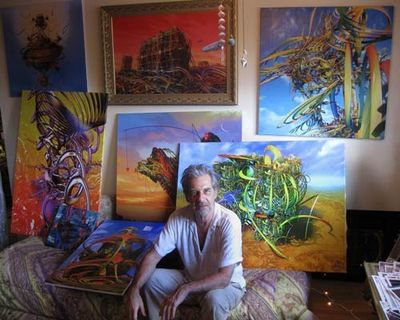 Brummbaer with his Fractal Tralfamadore images

The intersection of Brummbaer (he doesn’t use a first name) and fractal art is something worth taking a second, and more careful look at.  Brummbaer brings with him several decades of graphical and artistic experience and his “Tralfamadore” series of images are worth studying as well as appreciating for their fractal-ness.  There’s something to be learned from Brummbaer’s fractal artworks.

Brummbaer is a German-American digital artist who has done work as an art director, designer, graphic artist, and 3-D modeler. His fine art and underground magazine Germania brought him recognition in Europe during the 1960s, and he orchestrated light shows for musicians such as Frank Zappa and Tangerine Dream. In 1985 the International Synergy Institute in Los Angeles invited Brummbaer to be their artist in residence, and work on their Fairlight CVI computer. Brummbaer began focusing on computer graphics. He created several short computer-generated animations and has done visual effects for a number of popular films. Brummbaer was one of the primary computer animators responsible for the special effects in the Tristar motion picture Johnny Mnemonic. Brummbaer also created innovative openers for SIGGRAPH’s “Electronic Theater,” and has long been a pioneer in the world of digital animation, where he has been noted for his signature hallucinogenic style.

The paintings are based on fractal designs, calculated on a computer using commercial and some offbeat programs. After the creation by the fractal generators, the design is either moved into a 3D program like 3D Max and further treated, or taken into photoshop, where you tweak the color and composites. After several testprints, a high resolution version is painted in the computer with the help of a Wacom-tablet. Finally the image is professionally printed on canvas or paper guarantied to last a hundred years. Once the canvas is stretched, it is ready to be painted on. Layers of oil, acrylics and varnish give me the ability to create a vibrant painting, using some techniques of the old masters. This goes on until the painting is finished. Every painting is a single, unique piece — nevertheless, once a painting is finalized, it is possible to do prints in any size on any permissible material.

Brummbaer’s use of “post-processing” makes the most ardent fractal post-processor look like a purist.  And yet the images still retain their fractal-ness and only seem to have been enhanced and refined.  Don’t fear Photoshop. 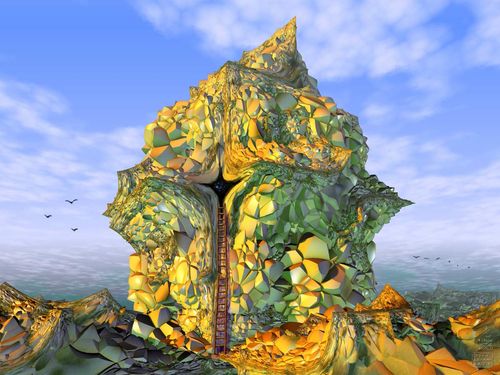 A Crack in the World by Brummbaer

He’s added the sky, which is not uncommon in 3D fractals, but he’s also added the birds, something which is much rarer but still not unheard of.   And then there’s the ladder reaching up to the little “wormhole” as Brummbaer calls them.  But the biggest difference in this sort of image by Brummbaer is the fact that it’s a series and they all fit into the setting of a story.  There’s a narrative context.

Once upon a time on Tralfamadore

These creatures spent most of their time trying to find out what their purpose was. And every time they found out what seemed to be a purpose of themselves, the purpose seemed so low that the creatures were filled with disgust and shame.

So machines were made to serve higher purposes, too.

And the machines did everything so expertly that they were finally given the job of finding out what the higher purpose of the creatures could be.

The machines reported in all honesty that the creatures couldn’t really be said to have any purpose at all.

The creatures thereupon began slaying each other, because they hated purposeless things above all else.

And they discovered that they weren’t even very good at slaying. So they turned that job over to the machines, too. And the machines finished up the job in less time than it takes to say, “Tralfamadore.”

from Kurt Vonnegut, jr’s “The Sirens of Titan”

Brummbaer adds his own bit to the storyline to draw his images into the context of Tralfamadore and set the stage for their entry:

So our cat “Missy” came back from Joshua Tree and claimed she saw an interstellar “earth lander” descending on the desert… under hypnosis she revealed the extents of her adventure, including detailed descriptions and measurements of the spacecraft, which we reconstructed, rendered and painted here for your enjoyment. Of course we could not stop here yet, and eventually built the spacecraft ourselves, constructing it exactly according to Missy’s hypnotic revelations. We understood that fractals in the real world suggest wormholes — the bridges between galaxies. Once you find – or create — a fractal design in the physical world, you have to find the smaller iterations of the pattern — and there, where the universe bunches up and folds into itself, you will find a wormhole to another space or planet. Since we built our machine, we hardly are home on the weekends…

By the menu in the upper left corner of the Brummbaer’s Tralfamadore homepage you visit his galleries separated into various categories of Tralfamadore imagery: 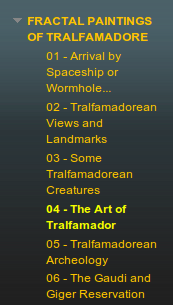 Here’s one from Gallery 02: Tralfamadorean Views and Landmarks: 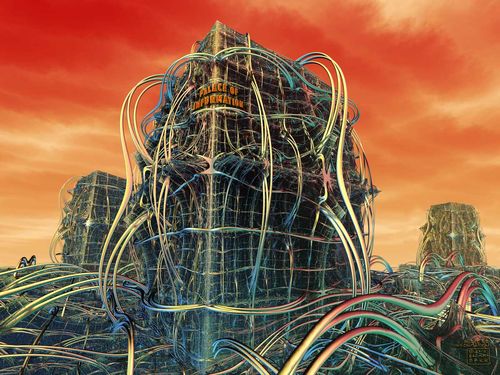 Palace of Information by Brummbaer

Note the simple addition of the sign “PALACE OF INFORMATION” to the side of the “building”.  This immediately establishes a realistic context of building/cityscape to the fractal imagery.  With the exception of the reddish sky background, everything is just a fractal image, albeit one that has been exported and rendered in a 3D program.

This one shows Brummbaer’s transformative use of fractal imagery the best: 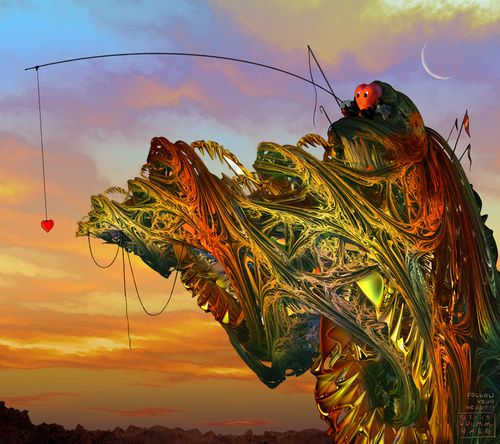 Who hasn’t seen this sort of quaternion or hypernion/3D toffee chew image before?  But the hand drawn additions: rider; pole; heart; whip; flags; sunset and moon; completely change the context and message of the fractal.  And it’s not just because he “drew” on it.  He obviously carefully chose this one and thought it over in his head about what he could do with it before even starting to add  those things.  Lastly, the title acts like a caption and frames the whole work with an idea that is the theme of the image.

Complex and subtle stuff, but Brummbaer, as you can see from the biographical note I quoted above, is a professional graphic artist and comes to fractals by a much different route than most of us have.  I think that’s why his work here is so different.  He’s taken similar kinds of imagery and done very different kinds of things with it.  Sure, there’s others who have drawn on fractals or even strung a few images together for a diptych or triptych, but Brummbaer’s Tralfamadore collection is much more refined and polished than anything of its kind I’ve seen in fractaland.

Which is not to say that no one else can do it as well as Brummbaer can.  In fact I’ve reviewed this little project of his precisely because I thought it might suggest other creative tangents that others might consider going off on after seeing such a rewarding example.  I’ve often thought fractals are better used in supporting roles than playing the starring role themselves.  I think that’s the lesson to be gained from this collection of Brummbaer’s fractal art.