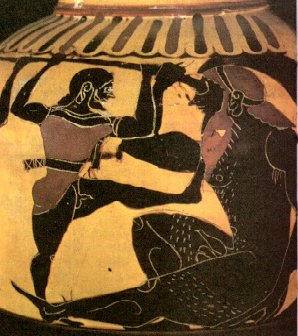 My continuing Odyssey in the seas of Deviant Art has brought me to what I shall refer to as the island of Apophysis, that being the great flame fractal program created by Mark Townsend which utilizes the “flame algorithms” discovered or invented by Scott Draves, the author of Electric Sheep, the original flame fractal application in the form of a screen saver.

My apologies to Mark; he did a great job of producing the software and gave it all away freely so that the whole world may use it (and sometimes it seems the whole world is using it).  My urge to ram a sharp stick into the eye of this cyclops is because I think that while it may be a great thing to play with, it has taken up a disproportionate amount of gallery space everywhere in the fractal world with endless variations of its very limited themes.

While I’m at it I’ll apologize to Scott Draves as well.  He had the right idea when he made a screen saver out of his flame algorithms because that’s all flame algorithms are good for: live entertainment.  Scott made the algorithm code open source under the GNU Public License (same license as Linux) which allows anyone else to use it as long as they don’t add restrictions to the software they produce with it.  That’s one of the reasons flame fractals are found in so many places.  If you love flame fractals in general and Apophysis in particular then give a hearty cheer for Scott and Mark.

Now let’s get down to blinding the beast.

Change the colors, mix and match the Five Great Themes, add an inspirational title and that’s about all you can do.  Now there have been some 3D additions like I mentioned as well as numerous attempts at animating these flame constructions but they don’t have anything like the variety of imagery types that the mandelbox or other 3D fractal hybrids do.  I’ll go out on a limb here and say that Scott Draves probably saw all there was to see when he made his screen saver program and let it out of it’s pen and onto many thousands (millions?) of computers.

Here’s my main point:  Flame fractals are fun to watch as a screen saver and fun to play around with in a program like Apophysis but they become boring and repetitive when made into still images.  It’s literally like photographing a fire: you can’t capture the quality that makes it exciting to watch.

Here’s some examples of that from the Electric Sheep screensaver, set to the synthesized sounds of Kraftwerk:

If fractals in general are best experienced in their interactive software form, then flame fractals are the best example of this.  In fact, I would say that flame fractals really have no other beneficial aspect to them than live entertainment.  There’s a few, very rare examples of something that someone has made that captures that ghostly, other worldly look of flames, but in my years of browsing other people’s fractal art galleries I don’t think I’ve seen more than just three or four of these.  Flames aren’t like other fractal algorithms in terms of creativity.

Here’s a recent, short (3:10) YouTube video by Scott Draves that adds some perspective to the whole flame fractal genre, from the original screensaver to more recent applications of it.  Look and see if you can see anything interesting and art-worthy in the various flame fractal graphics shown.

Whether you watched the video or not I think you’ll see that there’s an appeal to flames but that it’s almost entirely confined to their application as moving, animated graphics and even then it’s more of a plaything like the screensaver or a visualization accompaniment for music.  Alone, as in a still image (or thousands of still images) flame fractals are categorically less interesting, to put it mildly.  In fact, I would go so far as to say that flame fractals are a waste of time and ought to be separated from the main fractal category on sites like Deviant Art because they’re so uniquely boring and not likely to be of any interest to anyone except the people who make them.  Actually forcing the Apo crowd to look at their own work would be poetic justice.  Creatively it’s not much and yet it’s managed to draw a considerable number of “players” to it.

I think the creative shallowness of flame fractals is best exemplified by Thomas Ludwig’s new program, Chaotica.  Like Mark Townsend with Apophysis I’m sure Thomas (aka Lycium on DA) has made a good flame fractal program.  And also like Mark he’s giving it away freely, but based on what I’ve seen made with it, the same “Curse of the Flames” inhabits this new program as well.  If you’re not familiar with Chaotica it has it’s own Deviant Art group and you can see for yourself there what’s new and what isn’t.  I’ve been meaning to post about it for months but since I haven’t seen any artwork of interest made with it there’s not much to talk about.  To me, so far it’s just more flame fractals.  Perhaps Chaotica’s contribution to flame fractals is purely on the technical side?  faster rendering, optimized code?  But after so many years of these “flaming” flame fractals, who really cares anymore?  I mean, apart from the people who make them, that is.

That Cyclops has eaten enough of the Electric Sheep.  Please, don’t think twice before you post another flame fractal image –think three or four -hundred- times.

10 thoughts on “Flame Fractals: Get the Fire Extinguisher!”