From Fractalforums.com, where "Cheers!" is more than just a digital signature and "Prost!" needs no translation

I actually got a good look at the (new) Munich airport back in 1993 when I was on a British Airways flight to Istanbul.  The pilot announced that passengers were welcome to come up and look around the cabin (pre-9/11 days),  it was a clear day and when I was up there one of the pilots pointed over to the left and said,  “That’s the new airport at Munich”. 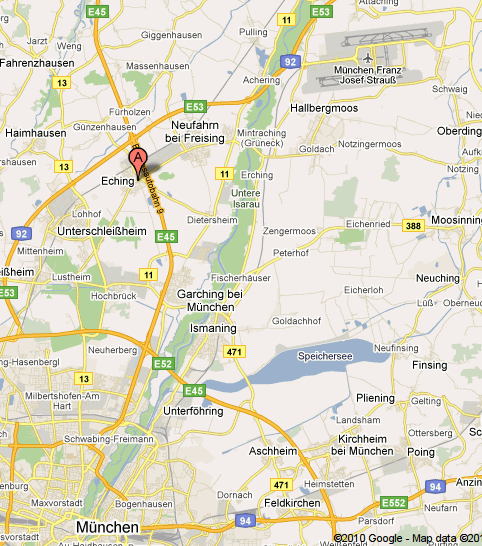 He's not joking; Eching is just down the road from the airport

Well drown my sorrows!  Hermann is none other than the Hermann of Wackerart.de.  I’m familiar with Wackerart because I bookmarked a particularly nice example of the Burning Ship formula a few months ago from that site.  It’s a special image for a number of reasons. 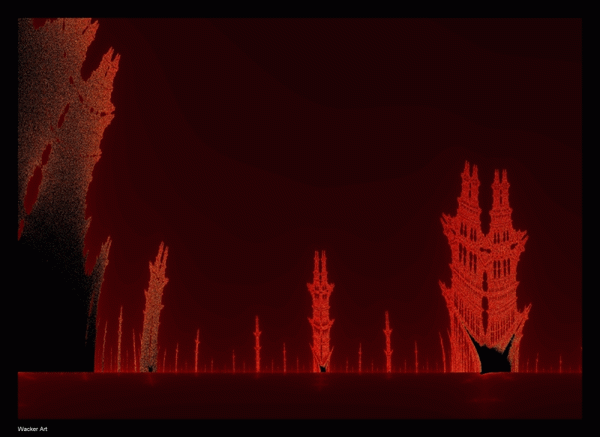 The burning ship formula is nothing new, but I find in today’s fractal art world it’s all about style now and not technology.  This image has a special style to it.

You can see the ship in distress on the horizon and how the “flames” reflect the windows and woodwork of the stern of an old sailing ship.  The top of the flames is even a chimney-like shape.  It’s a glowing, LED-red seascape and in dreamlike fashion the smoke from the ships rises up as surreal towers forming a forest of bare trees on a winter’s night (or maybe that’s just me).

The other reason this image is special is because it links directly to a java applet where you can explore this actual image by clicking on it.  Hermann’s fractal gallery is actually an interactive one; the images are just starting points for your own exploration.  (There’s an enormous amount of work on Hermann’s site including watercolor paintings.)

This is “java gallery” is a very nice way to introduce people to fractal art.  It shows not just how it’s made but also where it’s made.  The interactive image becomes merely one snapshot of the fractal “camera” and an example of how the final image is derived from the raw source of fractal imagery created by the software.

The coloring is fairly simple, but as I was saying, it’s not about technology so much anymore as it is about style.

Here’s another very stylish and yet deceptively simple image: 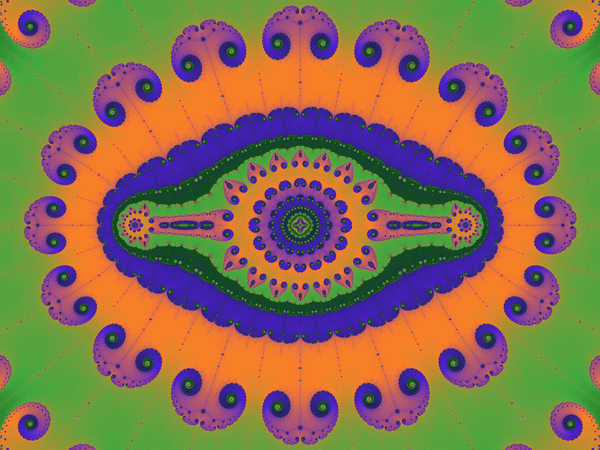 Pretty simple fractal image in some ways and yet the bright but plain color scheme really makes the fractal patterns and structures become electric.  It’s like something out of a circus, but a very stylish circus like Cirque du Soleil.

Here’s another one by jwm-art: 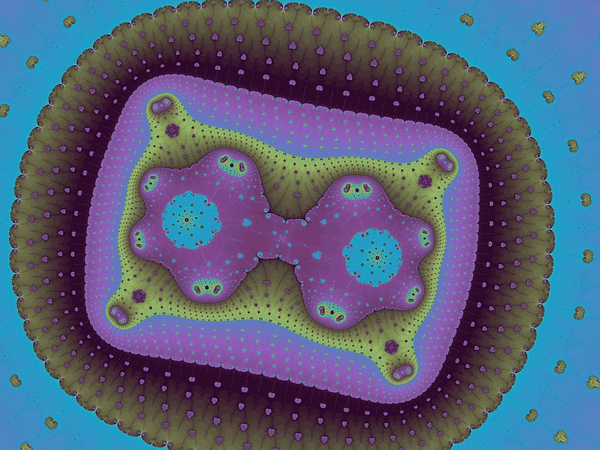 Simple shapes and simple colors again, but like all little things when they’re multiplied instead of added, the results are huge and categorically different.  That’s the difference (no pun intended) between the effects of technology compared to the effects of style on artistic impression.

I like the little Space Invaders shapes and especially, like in the previous one, the round, eye-like shapes in the central part of the image.  Also there is a certain phosphorescence to some of the elements in the image like the blue outer background and the green little shapes sailing on it.

Jwm-art had this to say about these two images of his in the original thread on Fractalforums.com:

I’m quite pleased with how these two turned out. I’m trying to familiarize myself with tuning with zooming into the M-set. I’ve been spending quite a lot of time over the past few days exploring these things and am starting to see the patterns so to speak. I want to discover new constructs but am not sure it’s possible – I recently came across a page of Mandelbrot constructs created around the year 2000 which blew me away (sorry I can’t recall how I got to them).

(Unrelated to all this is an interesting and extremely realistic rendering of a mandelbox detail here on jwm-art’s site.)

Jwm-art is, if I’m reading the threads on Fractalforums.com correctly, currently writing his own fractal program, MDZ.  I believe these images I’ve shown here come from prototypes of that program he’s developing.  I just can’t get over how many multi-talented programmers have congregated over on Fractalforums.com.  It’s like the Athens of fractal art to which I am nothing more than a tourist.  Fortunately for people like me, you don’t have to speak Greek to look at the pictures.

I just discovered from reading the Readme file of mdz-0.0.9 that jwm-art is James W. Morris.  I kept thinking it had some connection with Joe’s Window Manager but no, it’s unrelated.

I don’t know if some of the graphical qualities of James’ images are a product of his program, MDZ, and that MDZ just lends itself to these styles of rendering.

Well, in closing I’d just like to suggest that I think it only appropriate that Fractalforums adds another smiley to their vast repetoire of emoticons in honor of Hermann’s hospitable invitation: