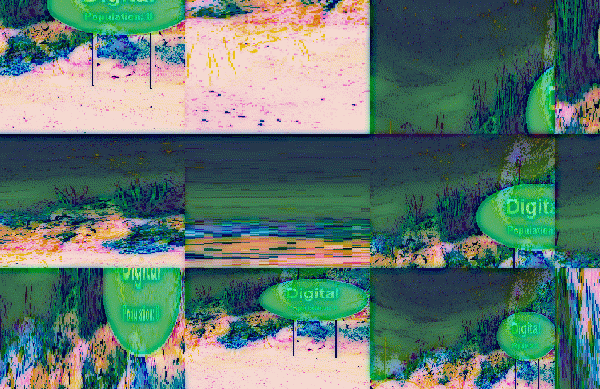 Is the entire digital art medium just too new and different for the art gallery world? Has the art world, that great destroyer of cultural norms and traditions, found a free-flowing, anarchic, internet-based digital medium too ab-normal and un-traditional to dive into? Is it because digital art can’t be cornered by track lighting and nailed to the wall? Do art galleries see the digital medium as irrelevant because a billion perfect copies can be made by anyone in an instant and therefore bought and sold by no one? Does the art world now revolve around making money and neither artists nor art-sellers have any interest in artwork that they can’t make a buck off of? Do they see digital art as free for all and good for nothing? Did I mention they can’t make a buck off it?

If the answer to all those questions is yes, then the 21st century art world is going to be radically changed. It’s going to move from the gallery and museum to the basement and the Blackberry. It’s going to be a movement of the anti-movement, because the road used to keep on going and going, but now it’s come to…

They haven’t quite figured out if they’re going to build a by-pass around it or at best, call it a wasteland and ignore it. Digital has literally pulled the plug on art. If art can be freely viewed by anyone with an internet connection and worse, much worse, collected and copied, and much, much worse –shared– by anyone with an internet connection, then where’s the cash? where’s the gallery set-up?

How will artist’s pay for their berets and oil paints? What’s going to cover those big empty spaces on walls behind couches in the living room? Gallery owners are art lovers and will do anything to promote culture once they’ve paid the bills and filled their stomachs. It’s a business to them.

That’s what’s so radical about digital art. For the first time in whenever we started recording these things, art is going to stop. There isn’t going to be any Digital Art movement or Fractal Art big mainstream exhibition/gallery/museum because the thing we have come to think of as the “Art World” is in fact a commercial entity and they aren’t going to do all that for nothing. And without the money, art is nothing to them. Art, as we know it, is the domain of the unique, singular, original, “sold to the bidder for $1,000,000”, tangible, stealable, buyable, exhibitible, losable, findable, heirloomable, medium. Medium. “Art” is a medium. We just didn’t know until Digital showed up and suddenly the art world lost interest in art.

Printmakers have dealt with this issue of multiple originals. Printmakers will make limited editions of their prints and then destroy the printing plate so it can’t be used to make original originals anymore. They do this because if their art is in (relatively) endless supply and easily duplicated it isn’t worth much to most collectors. Apparently art collectors don’t want everyone collecting the art that they collect.

Printmakers artificially created scarcity of their work and by doing so, higher prices for their work, by limiting the reproducibility of it. In short, they destroy the plate. They destroy their work. But it’s seen as perfectly normal and in fact, it’s the expected thing to do. Almost all prints will have a number on them, like 36/120, to show their originality (i.e. 36th) and their rarity (only 120 made).

Photographers do the same thing, they just destroy a negative instead of a heavy printing plate. Or at least they say they do. Many problems have arisen in the photographic collectors world recently over the discovery of previously thought to be destroyed negatives which have been used to make more prints –and to sell them– of course. Some collectors will have the photographic paper dated and authenticated so that the new prints will be considered less valuable or even unauthentic.

Art and easy copying don’t seem to go together very well. But for art forms that can be easily destroyed, like printmaking and photography, there are ways of restoring this traditional context of fame and immortality. But digital files, and hence, digital artwork, is infinitely reproducible and every copy is an exact original. That’s good for culture and the dissemination of it, but it’s bad for commercialism. And commercialism is what drives the promotion and exhibition of art.

It costs nothing to make and costs very little to exhibit. But try selling a digital file. That’s the real digital stuff. I don’t mean high-resolution giclee prints. I mean pixels. There’s a lot of digital art that can’t be printed because it lacks the resolution. It looks good on a monitor, but a 500×375 pixel image will be have to be postage stamp sized to look any good outside of it’s digital aquarium we call a computer monitor.

Digital art can be a hobby and you don’t have to support it with art sales like the old fashioned, beret-wearing, artists had to. The title of Professional Artist will be a little difficult. But your professionalism will come from making good artwork and not making good money.

Forget the art world and their wine and cheese gallery exhibition nonsense. If they wanted to see innovative, cutting edge artwork they’d be at home on the internet. Bunch of losers!

2 thoughts on “The Road Stops at Digital”